THE CONTAGION OF CHANT AND GOOD LITURGY 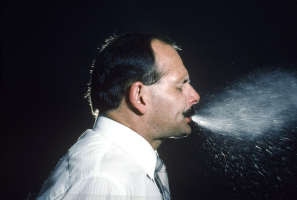 Just as bad liturgy is shown to be a terrible contagion spreading through the Church like a virus that can't be stopped, so virulent it is, is there such a thing as a good germ (like wheat germ) that could lead to good liturgy being caught, like a virus that is spread from person to person, pew to pew, church to church and infecting the whole Church will glorious chant and good liturgy?

On the post of spreading germs from the common chalice and the handshake of affliction, I mean, peace, which in Boston and other places has been suspended because it is so great a threat to public health, Quilisma Ignotus makes a marvelous comparison that could be used to make chant and good liturgy a good contagion and I quote him/her:

"I suspect that there was much germ-sharing in your recent close-quarter chanting event - what with people standing next to each other, breathing, chanting, expelling microbes as quickly as their melismatic little diaphragms could push air through their germ infested bronchial passages."

What a marvelous way to promote the contagion of chant. The only ones who fear this would be those in progressive circles who are fearful of this sort of "Performatism" which I think is the very definition of the word.

Yet, no one has banned gatherings of Catholics at Mass or elsewhere where by simply breathing one could catch a deadly virus. Nor has anyone be ordered to wear plastic gloves in touching door knobs and the like. But who knows, like the Japanese, we all may be soon wearing surgical masks to prevent the spread of contagion, but not for singing chant, for that might disrupt the "melismatic little diaphragms from pushing air through their germ infested bronchial passages" to a waiting world wanting to breath in the good germs of chant!

Father, remember your commenters one day at Mass!