These photos are stunning as are the vestments for the Requiem for Louis the XVI and you can see more at their website by pressing this sentence! 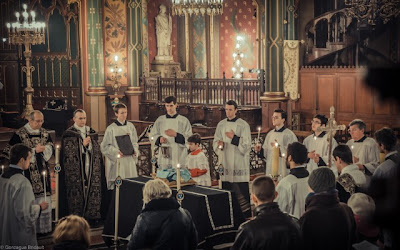 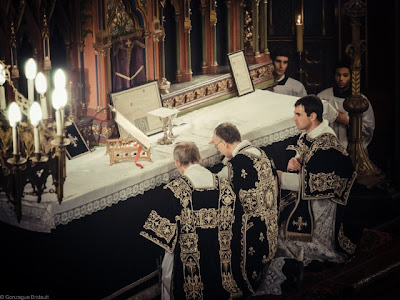 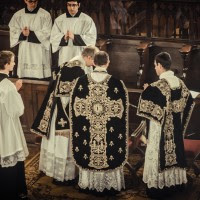 "I die innocent of all the crimes imputed to me." (Louis XVI) Yeah, right, Citizen Louis Capet.

Methinks the royalists in black vestments are engaging in a little too much fantasy, liturgical and monarchical. But then, absinthe can have that effect...

I love to see photos from the Church of St. Eugene/St. Cecile in Paris. It is a beautiful church and the high altar area is stunning. Thanks for posting this.

If that anti-royalist barb came from where I think it came from, all I can say is that it's pretty disturbing that a person of such rank would embrace a position that implicitly endorses regicide and the Reign of Terror.

'Introibo ad altare Dei' The words of one of the priest-martyrs of the French Revolution as he ascended the scaffold. His crime? Being loyal to the Pope. Louis XVI's crime? Wanting the best for his subjects.

The parish of St-Eugene was asked by the Archbishop of Paris to offer Mass regularly in the EF. They use the Propre de Paris of 1962. They also celebrate the OF in French.

I can see Citoyen Ignotus standing by the guillotine exulting over the demise of his innocent fellow-citizens. Until it was his turn to be shaved by the National Razor.

Representative "democracy" is a lie. Has never happened, will never happen, and always turns into one big pagan-fest.

I think for the few times a year Black vestments can be utilized they should. They are beautiful and I am sure much work went into their creation and execution. There are probably so many sets in storage or Church basements it seems wrong not to use them.

For all the talk of Gallicanism the thing that Louis XVI could not stomach was the Civil Constitution of the Clergy which aimed to put the Church under state control (Henry VIII did the same in England). Real Catholics would only accept the sacraments from non-juring priests.

The swiftness of Revolutionary 'justice' was such that the priest I mentioned earlier was still in his Mass vestments when he was guillotined.

Despite his coronation oath to 'extirpate heretics' Louis emancipated the Protestants before the Revolution. Catholics in the UK had to wait until 1829, and it was only the real possibility of civil war that forced the government's hand.

I think Ignotus has just told us all we need to know about himself and his true beliefs. Unbelievable!

Pin/Gene - Nope, I haven't told you a thing, other than I think that the royalists, jonesing for the "restoration" of a monarchy, are silly people.

PI, those who might attend a Requiem Mass for Louis XVI, or indeed celebrate one, are far from 'silly'. They actually have an understanding of French history that doesn't necessarily buy in to the myth of the Revolution. The direct Bourbon line has now died out, so to suggest that they want a restoration of the monarchy is misleading.

I know it's difficult for Americans (who have mythologized their own revolution) to understand, but France did not begin in 1789.

John you have to keep in mind that Americans are very arrogant because of their youthfulness! Thank God I'm not as my mother was a native Italian and my father a native Canadian of Catholic Scottish descent and all of us naturalized American Citizens.

John - Read the homily on the web page from which Good Father Chicken Little borrowed the pictures. There's nothing misleading in what was preached nor in what I said.

PI, I have read the sermon, and I know French. It makes some quite profound connections. Nor does it read like something written by a silly person. If the liturgy of the Requiem Mass strikes you as a fantasy, then one can only assume that you are one of those who believes the Catholic Church began with Vatican II, which is even more absurd than believing that French history began in 1789.

You are capable of making intelligent contributions, but you run the risk of making a fool of yourself if you continue in this vein. My one quibble with the French website is that it quotes extensively from Ps 42 which of course is omitted in the Requiem Mass.

Ignotus, Of one thing I am certain...the efficacy of any Sacrament administered by you is due solely to the redeeming grace of God exclusive of, and counter to, any intention you may have. Your priesthood is living theological proof that God can and will use anything to His Glory, as well as being a source of humor for the rest of us.

Pin/Gene - Your theology is not Catholic. If my intention is contrary to the intention of the Church (and it never is), then the sacrament is not confected. If, for example, I visited the Cavanagh Company that makes hosts and MY intention was to consecrate ALL the hosts in the warehouse, it would not happen.

So, you err again, being overwhelmed by your anger and silliness.

John - The homily is a lament for the "missing" monarchy. It is a "restorationist" pleading. THAT is silly, a fantasy, a pipedream. And the "old timey" liturgy is part of that fantasy.

Pater Ignotus, perhaps I've misunderstood you, and forgive me if I have, but when you say:

"THAT is silly, a fantasy, a pipedream. And the "old timey" liturgy is part of that fantasy."

"Methinks the royalists in black vestments are engaging in a little too much fantasy, liturgical and monarchical. But then, absinthe can have that effect..."

are you suggesting that praying for the dead (whomever it may be) is silly? Or is it only silly when it's fallen political leaders? Or only when it's people with whom you disagree?

Also, I question your calling the Tridentine Rite a form of "liturgical fantasy." What, exactly, does this mean? Were it some strange combination Roman/Byzantine Rite invoking Athena and Zeus, I might understand, but that's not what's happening. They're using a completely valid form of the Mass.

Ignotus, my theology is right on...so is my perception.

Since the Revolution France has had two monarchies, two empires and five republics. The restoration of the monarchy was being seriously considered as late as the 1870s. After you and I are dead, I suspect that the Church's liturgy will bear more resemblance to what is shown in the photographs than to the 1960s and 1970s aberrations which you have obviously signed up for, and which has emptied churches throughout Europe and North America.

John - I have not "signed up" for any abberations, but for the liturgy the Church has given us.

And I do not accept the notion that the liturgy has "emptied churches throughout Europe and North America." If the liturgy is at fault, why has this not also happened in every place where this liturgy is celebrated?

PI: Please explain why you think a republic designed to accommodate the personal rule of Charles de Gaulle and which dates from 1958 should be intrinsically superior to a constitutional monarchy. Or why a form of liturgy which is of even more recent provenance (minimalist, vernacular, informal and distinguished by a style of music whose banality would have appalled Cherubini) should be accounted better than the tradition which preceded it.

John - As concerns the forms of civil governments in general, "Quod omnes Tangit ab omnibus approbari Debet / What concerns all should be approved by all." That is why democratic governments are, intrinsically, superior to monarchies.

This doesn't mean that ALL democracies are, per se, superior to monarchies, but that, in principle, the recognition of persons as agents who rightfully participate in decisions that affect them ARE better than those forms of government which exclude the participation of the governed.

So that is why citizens of the USA (a republic) deny that representative democracy exists and feel that they need to arm themselves to the teeth against their own government.

In England we had representative government long before we had democracy (universal manhood suffrage dates only from 1884) and realize that freedom under law is more important than being allowed to vote for one party or another every five years. "May she defend our laws" is a line from "God Save the Queen", and monarchies have a better track record at this than do republics. When we did try doing without the monarchy (1649-1660) we ended up with a military dictatorship.