THE CONCLUDING MASS OF CHRISTMASTIDE AT THE VATICAN, CHIRPING BABIES BEING BAPTIZED AND AD ORIENTEM WITH HYBRID OF ITALIAN AND LATIN

The way it was done today as in the other years the Holy Father has celebrated Mass in the Sistine Chapel. Oh! the glory of ad orientem: 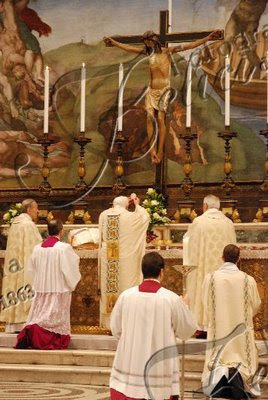 As I type this, I'm watching the "Baptism of the Lord" Holy Sacrifice of the Mass from the Sistine Chapel with His Holiness, Pope Benedict XVI. I've come late to the Mass, the Liturgy of the Eucharist had begun with the "Preparation of the Offerings."

Of course this Mass is celebrated at the historic Sistine Chapel altar and thus ad orientem. It is glorious to see this of course.

But this is the way papal Masses that are not meant for a worldwide audience are celebrated in Italy. He says or sings much of it in Italian, but beginning with the Preface Dialogue, Preface and Eucharistic Prayer, these are always in Latin.

Man! the babies are crying, but no one is flustered.

At the Our Father, the Holy Father used the introduction for it from the Rite of Baptism tying baptism into Confirmation and Holy Eucharist. I've not done that when I've had baptisms at Mass because I didn't know I should. It is good to see the Holy Father model the right way!

Then the Our Father was chanted in Italian with the Italian embolism and doxology chanted.

The Holy Father continues the Mass in Italian.

As an aside the Holy Father is clearly moving more slowly these days and going up and down stairs he needs some assistance, but not much. But he still completely genuflects a heck of a lot easier than I do, my knees are killing me, so I can only do a partial decline! How sad!

My clairvoyance tells me that the anticipated official "reform of the reform of the Ordinary Form of the Mass" will be what the Holy Father has been modeling during his pontificate and these are the following that will be codified and made liturgical law:

2. The manner of celebrating other sacraments during Mass will remain as in the rubrics of the Ordinary Form, including Baptism and Holy Matrimony and at the time after the homily, although for the Rite of Marriage I foresee something of that rite being done in place of the Penitential Act.

3. The Benedictine Altar arrangement will be written into the General Instruction and it will make clear that it must be used for Masses facing the congregation and that Ad Orientem is perfectly lawful at any and all Masses with the faithful.

4. The preservation of Latin for the entire Mass will certainly be allowed as it currently is, but will be mandated for the Preface Dialogue, Preface and Eucharistic Prayer and all the Eucharistic Prayers will remain.

5. Holy Communion will be distributed to communicants kneeling, including deacons and laity and this will be the norm. Standing will be the exception.

6. Gregorian Chant or Polyphony will be the norm for the sung parts of the Mass, with the sung Mass mandating the use of the propers, that is, the Introit, Offertory and Communion Antiphons as well as the Kyrie, Gloria, Credo, Sanctus, Agnus Dei. However this would not preclude the great works of artists for special occasions.

7. The use of other anthems as filler and of a variety of styles in harmony with the Church's sense of Sacred Music will be allowed.

8. The Gradual and/or Tract will be allowed as an option to replace the Responsorial Psalm and Gospel Acclamation.

There is very little wrong with the Ordinary Form of the Mass when celebrated by the book, using Gregorian Chant or Sacred Music that is a derivative of it, and doing it completely including the Introit, Offertory and Communion Antiphons, using the Benedictine Altar Arrangement and returning to ad orientem for the Liturgy of the Eucharist and kneeling for Holy Communion.

No radical adjustment need to be made to it when done in this fashion. When I post our Church Music Association of America Solemn Sung Mass in the Ordinary Form, you will see what I mean. It too is a hybrid of Latin and English and very similar to the Holy Father's Baptism of the Lord Mass this morning.

The Gradual and Tract are already allowed to replace the Responsorial and Gospel Acclamation.

Your clairvoyance agrees with mine on this. There's no need for him to "model" the EF. It's the OF that needs to be pulled out of the ditch.

To be perfectly honest I agree with all you said, I believe it will happen, whether I like it perfectly or not. (I don't. I believe there are too many options and I think that if they are to continue to exist, there should be clear rubrics about when each can be used, but alas. I think the celebration of Mass is far too inconsistent.) The only thing I would like to touch on is that the Tract is not part of the Gradual, rather the Tract is used in place of the Alleluia during Lent. We have those silly completely anti-traditional "Gospel Acclamations" for some reason, but the Tracts can be and I'd say should be used.

One recommendation I'd have is to disallow white vestments for funerals in the Western world except for the funerals of people from cultures where white is the color of mourning. For example, people of East Asian descent living in the USA. White is not the color of mourning in the wider American and European culture and is frankly offensive. I wonder what a bride would say if, just to give a taste of how silly and offensive white vestments are, a bride's mother wore a black dress to her daughter's wedding. Same thing.

White vestments at funerals for those who have attained the age of reason? Presumptuous apart from anything else. The perversion of the real meaning of Catholic rites for the dead is the worst thing to have emerged from the cultural revolution which followed V2.

Father, how soon may we expect to see this "reform of the reform" take place? Might we see it in the next couple of years?

Our 12:10 Sunday Mass is ad orientem for the Liturgy of the Eucharist every Sunday.

You say, "My clairvoyance tells me that the anticipated official "reform of the reform of the Ordinary Form of the Mass" will be what the Holy Father has been modeling during his pontificate and these are the following that will be codified and made liturgical law: (then list 7 issues)"

All seven of those things, with the possible exception of number 3, regarding candle placement are already liturgical law. How is that being clairvoyant?

If you were to do all of those things you list, you would essentially have your 12:10pm Mass, if I have been reading you correctly this last year or so.

Can you please develop your thought on this a little more, I am not tracking with you on how they are not already liturgical law. Thanks.

Yes everything I wrote of can be done now, but they are not being done because most of these are options with multiple other ways possibly and in the eyes of liturgists, many priests and bishops preferable to what is clearly a choice many refuse to implement.

I'm 16. Something tells me these reforms the Holy Father has been practicing will be implemented on a large scale, before I pass away.

Oremus! And in the meantime, Father, God bless you for celebrating Holy Mass well.