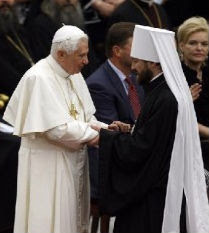 ON 31 OCTOBER 2012, METROPOLITAN HILARION OF THE EASTERN ORTHODOX CHURCH READ A LECTURE AT THE VILLANOVA UNIVERSITY, ONE OF THE OLDEST EDUCATIONAL INSTITUTIONS IN THE USA, LOCATED NORTHWEST OF PHILADELPHIA, PENNSYLVANIA. THE FOLLOWING ARE EXCERPTS FROM THAT TALK:

Metropolitan Hilarion’s lecture was dedicated to the past and present of Orthodox-Catholic dialogue. He said in the beginning: "The teaching of the holy fathers of the first millennium, when the Churches of the East and the West abided in unity, although at times this unity was subjected to serious trials, is the sure foundation upon which dialogue between Christians can develop successfully and fruitfully. It is my profound conviction that fidelity to the Christian tradition, the preservation of continuity in the teaching and life of the Church is the proper means for the restoration of unity among Christ’s disciples.

"It is because of the renunciation by some Protestant denominations, as well as parts of the Anglican communion, of the ancient Christian tradition that it has become ever more difficult for the Orthodox Church to continue co-operation with them. I regret this, but the dialogues with Protestants and Anglicans which we have had for decades are now under threat because of processes taking place in the Protestant communities of the West and North. I mean the continuing liberalization in the field of theology, ecclesiology and moral teaching. Certain denominations have legitimized the blessing of same-sex unions and the ordination of people openly declaring their non-traditional sexual orientation.

"We are obliged to speak about this because we want to preserve the good that was achieved during the years of dialogue between Orthodox on the one hand and Protestants and Anglicans on the other. In defending the two-thousand-year-old tradition of the Church, we remain true to this dialogue, yet at the same time we see that Protestants and Anglicans are growing away from us by accepting innovations which we find unacceptable.

"I am speaking of this in the walls of a Catholic university by no means because I am afraid to criticize Anglicans and Protestants to their faces. On the contrary, every time the opportunity arises, I speak openly of our concern in direct dialogue with our brothers from the Anglican and Protestant communities. Thus, for example, in 2010 at a festive dinner at the Nicaea Club in London in the presence of the Archbishop of Canterbury Rowan Williams I stated the sad fact that the ‘Orthodox and Anglican Churches are to be found on different sides of the abyss which separate Christians of a traditional direction and Christians adhering to liberal teachings’. And as recently as the day before yesterday I spoke of the same things at the old Episcopalian seminary at Nashotah House, a contemporary of your University.

"Unlike dialogue with the Protestants and Anglicans which has reached a dead end, dialogue with the Roman Catholic Church seems to have a future to it precisely because, like the Orthodox Church, the Catholic Church does not think of itself outside of Tradition and strives to teach and live in accordance with the tradition of the apostles and holy fathers. In my view, the significant improvement and strengthening of relations between our Churches that can be seen in recent years is connected to an awareness that we are united by a common heritage, thanks to which both Orthodox and Catholics can and must together bear witness to the world of the eternal values of the Gospel."

In conclusion of his address Metropolitan Hilarion underscored: "It is essential for the Orthodox and Catholics today to perceive each other not as rivals but as allies in the cause of the defense of Christians’ rights. We must develop interaction outside of the success or otherwise of theological dialogue, independent even of how relations between the Orthodox and Catholics take shape in concrete regions around the world. We must build this interaction proceeding from a common strategic task since we are dealing with the future of humanity. It is upon our joint endeavours that the future of Christianity in the third millennium will primarily depend." – Press Release, Moscow Patriarchate, Nov. 1.

Patriarch Kirill of Russia in ecumenism:

"The Roman Catholic Church's position on many issues of social life is closer to the Orthodox point of view [than that of the Protestants]. Anyway, we bear in mind a whole range of differences in the belief-preaching and practice of the Orthodox and Catholic Churches. No compromises can be made in this area."

The basis of Orthodox ecumenism is quite similar to what the Catholic Church used to believe: everyone needs to convert to Orthodoxy. This includes Catholic, who are in schism from the True Church from the Orthodox perspective.

The movement these days is to have a unity in social movement in the secular world on common issues, mostly hot-button social issues. That will probably be the extent of the discussion for quite some time.

The Orthodox are organizing a worldwide "Great and Holy Council" to be held perhaps this or next year that might address the issue of ecumenism with the Catholic Church. But, with Russia being the largest patriarchate these days and their anti-ecumenical stance, I don't think it will be too friendly toward perceived Catholic innovations in the faith. The other patriarchates are likely to agree, as are the clergy and laity.

There are some liberal protestants who still want ecumenism. All that's required is for the Catholic Church to abandon all of the doctrines that liberal Protestantism finds objectionable.

The problem with ecumenism is the same one I addressed with A2 re same-sex marriages the other day. Since the Church is unable to change her doctrines, any dialogue aimed at getting her to do so--or even to consider the notion--is pointless. The Church should not "dialogue" with positions that are wrong, (one really shouldn't verb nouns), but rather proclaim the truth in charity and let individuals decide whether or not to accept and adhere to it. Thus, any understanding of ecumenism that has doctrinal change as an objective is also fundamentally wrong. This is something that many Catholics--some bishops among them--don't get.

As for the Orthodox: do we have any information on the impact that the drastic post-VII liturgical changes may have had on their own ideas regarding reunion with Rome? It cannot have been good.

A5, I know some Orthodox. They don't seem to pay much attention to the Catholic Church. Many, I would guess, think the liturgy is still in Latin! I would think those that are aware of the changes see them as Rome being Rome - innovating away from Truth.

But, my experience is limited to some pretty hardliner Orthodox. I guess lost of them don't really pay any attention to what Catholics are doing. Just like you and I aren't up on the latest worship styles of the various Protestant groups.

I predict that papal infallibility will be the doom of any unification. Historically speaking, why was the doctrine necessary? What precipitated it? Was there some dire controversy that required its definition?

As I understand it, the definition of infallibility at Vatican I was actually intended to limit the power of the pope by placing specific rules around the use of infallibility.

I agree the Orthodox will never accept it. They see it as a heresy and a blasphemy. Strong words there. Plus they remember those popes that were heretics. So they find it difficult to reconcile the history with the dogma.

My uber-liberal Protestant brother declared, just after Christmas, that he can no longer allow me to "influence his family." Thus his interpretation of 1 John 4:20 is quite foreign to me, as he purports to love God.

So much for ecumenism.

At least we're closer to union with the Orthodox than the Anglicans now... LOL. Anglicanism is a joke.

As to "why" infallibility was defined as it was and when it was, H. Pottmeyer offers the following reasons:
1. The schism b/w the church of the East and the Church of the West. The East had understood the Church to be a community of local churches in which the bishop of Rome enjoyed special standing but not jurisdictional precedence.
2. The "lay investiture" controversy, whuch saw the church struggling for the independence of the Church and its bishops from the princes.
3. Canonists were increasingly adopting Roman law which had a strong, central law-giver. At this time in the Church it was canonists who were defining the understanding of the Church.
4. Aristotle's theories on law had been rediscovered. These influenced the canonists to replace the communal understanding of the Church with a corporative understanding.

Innocent IV (1243-1254) adopted a principle of the late Roman law, that the ruler is above the law. "Innocent thus reached the conception of a monarchical primacy of jurisdiction which the papacy and the ultramontane theologians could take up in the 19th century."

"Toward a Papacy in Communion" Hermann Pottmeyer, pages 28-33.

I do agree, though, that Gregory VII saw te correlation between universal jurisdiction and infallibility. His idea of inflibillity appears more expansive than that set forth in Vatican I, though.

My only point was that Vatican I was an attempt to specifically define the outer bounds of infallibility: the criteria to be invoked upon its usage being set out by a Council is a limitation and not an expanse.

Moreover, in setting those limitations, the fathers of the First Vatican Council were clearly aware of the heretical popes in history, particularly the case of Honorius. So they were careful to place the limits on infallibility in such a way as to legislate Honorius's heretical views outside the sphere of infallible pronouncements.

I find this subject very interesting and quite important currently for a proper understanding of the current situation in the church.

Re: Universal Jurisdiction:
"Shortly after the abortive ending of Vatican I, the German Chancellor Bismarck published a letter in which he offered a skewed reading of Vatican I's teaching on the relationship between pope and bishops. In Bismarck's view papal authority had, by conciliar decree, essentially absorbed any and all legitimate authority of the local bishops. The German bishops felt compelled to offer a forceful response to Bismarck, rejecting his interpretation and offering what amounted to an important commentary and even development of the Council's teaching. In 1875 Pope Pius IX explicitly made his own the teaching of the German bishops."
Readings in Church Authority: Gifts and Challenges for Contemporary Catholicism, by Gerard Mannion, page 223.

I am looking for the English version of the German bishops' letter and Pio Nono's reply.

Interesting there were German bishops involved in the 19th Century considering their role in the original development in the 11th Century with the Gregorian Reforms.

Must be something about German bishops! Perhaps that is indicative of the current Pope as well...

I'd be interested to read what you come up with further on the subject of universal jurisdiction.