The reform of the reform in continuity is seeing some of what was discarded for a brief 40 years or so making its way back into the liturgy. Spirit of Vatican II "performists" are startled if not shaking to see the following return to parishes and cathedrals, not to mention basilicas:

2. Roman Chasubles also known as Fiddle backs--these practically did disappear and are now ascending especially in Rome of all places. As with any style or cut of chasuble these can be quite simple and sparse or very elaborate and decorated.

3. Gregorian chant and polyphony are definitely making a come back and the questioning of some genre of music for the celebration of the Mass as inappropriate is at a fever pitch in some circles.

4. The return of the Tridentine Mass, now known as the Extraordinary Form with its precise rubrics and narrow parameters

5. The exclusion of some from the formal ministries of the altar--boys and men only in other words and the avoidance altogether of Extraordinary Ministers of Holy Communion

6. The return in English to a Latin sounding or "sacral" sounding translation as well as a return to more Latin

7. The one "vestment" that causes the most consternation and seething is the Cappa Magna which only a bishop uses and only for a Pontifical Mass and only as a prelude to actually placing the liturgical vestments on his body.

I think "performatist" refers to a "look at me" form of celebrating the Mass that is retro by centuries but could also be retro by a few decades. We all know the 1970's look for style and even liturgy and some wish for us to return to that dreary period of liturgy and life.

It also means "performing" certain rituals in a precise, rubrical manner and excluding some things from the performance of the liturgy whether that be females in official roles and I guess even in choirs or making the laity more passive rather than active from their congregations. Of course I think this would be a caricature. Just as there are only a few "clown" Masses these days, the worst kind of performatism, there are only a few parishes that are like what I described in terms of keeping the laity from their rightful and liturgical place in the assembly.

So I post some pictures for you to compare various types of performatism. Which do you prefer and as a "performist" which would you exclude outright from the Liturgy? 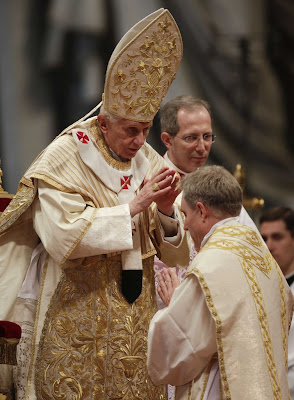 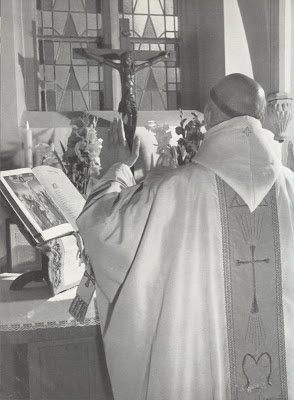 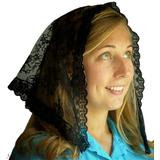 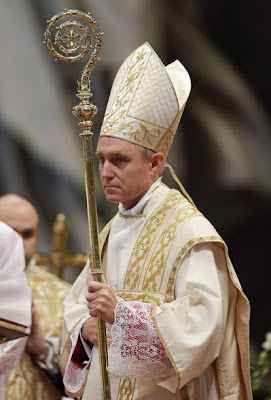 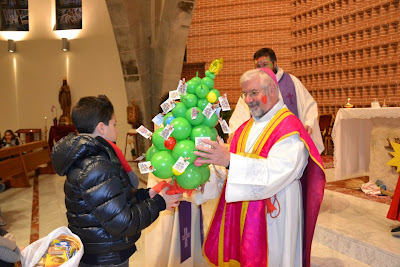 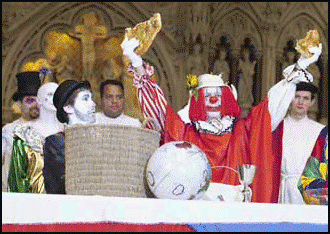 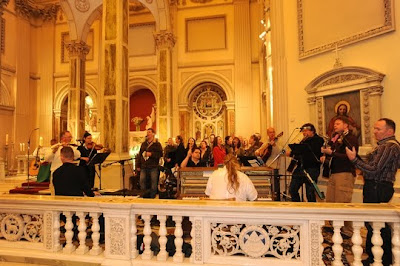 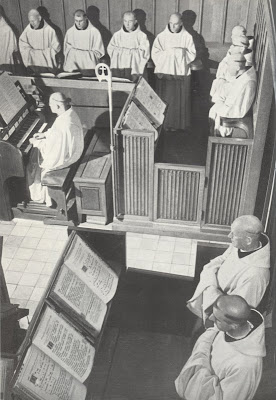 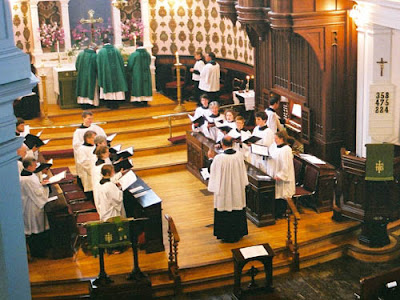 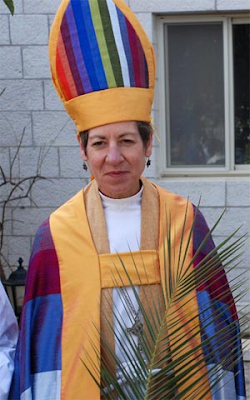 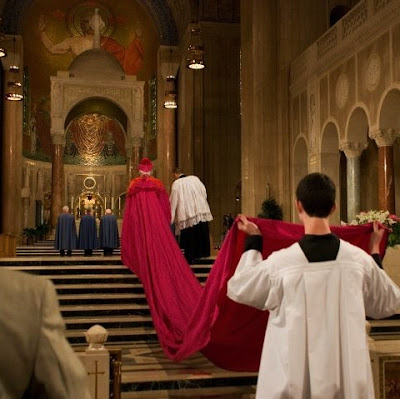 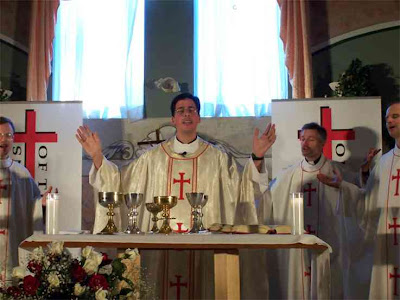 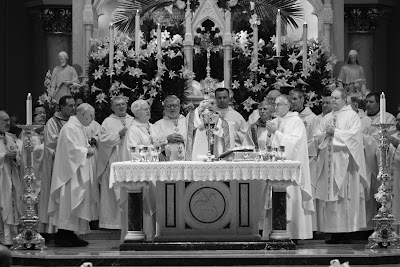 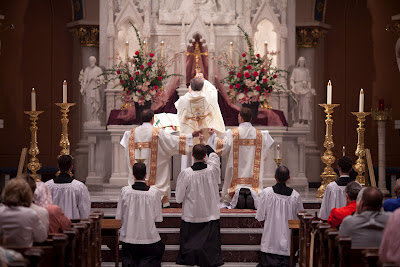 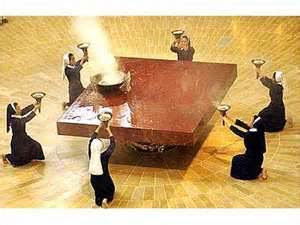 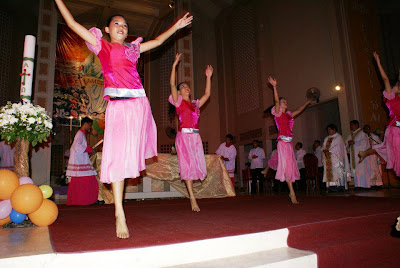 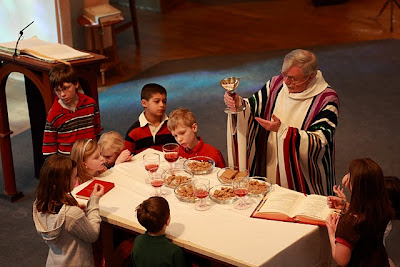 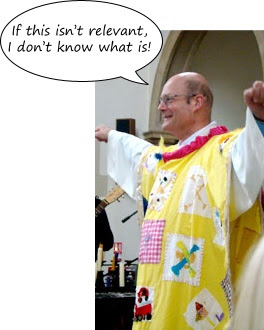 Press here for another performatist liturgy if you can stomach it!

MY FINAL COMMENT: Give me reform of the reform within continuity "performatism" any day over the post-modern performatism that so many think is superior. Make no mistake the radical ordinariness and dreariness of pseudo-incarnational theology these people promote is meant to lead to the complete deconstruction of the Catholic Mass, sacraments and Church and make it more Unitarian, or worse yet, Episcopalian, meaning transgendered people in ministry, no distinction of roles between male and female and all kinds of moral absurdities. That's the bottom line with the "performatists" lost in the 1970's and Post-Catholic banalities and desconstruction.

You list, "The exclusion of some from the formal ministries of the altar--boys and men only in other words and the avoidance altogether of Extraordinary Ministers of Holy Communion"

I think that this belies the difference in attitude between the "performists" and those who are sincere. We who are sincere, don't look at the faithful as being excluded, but rather we see them being restored to their proper role. This isn't an exclusionary action, but a restorative.

You also list, "The return of the Tridentine Mass, now known as the Extraordinary Form with its precise rubrics and narrow parameters"

The TLM's rubrics do not have narrow parameters, but rather they have defined parameters. I think that this is also belies a "performative" attitude.

we recognize that that our worship is not a subjective action. It is defined and it is clearly revealed. We strive to follow the objective truth of adoration and worship of God, the Father in a personal way. We are not looking for subjective human interjection, but rather we are looking to follow the principle of lex orandi lex credendi. The Church gives us all we need with regard to public worship. And in that is great freedom.

Sadly, this view is bemoaned and disrupted because those who oppose it are afraid to admit that their view is subjective and erroneous. Those who are "traddy" have jetisoned those two notions and have embraced that which the Church teaches regarding worship and adoration to God, the Father; with the Son, through the Holy Spirit!

My top priority would be to restore the reverence that I see now chiefly at the EF. Too often, the people at the OF before Mass carry on as if in the parish hall.

In general, I would hope for a parish here which implemented pretty much what you have done in Macon, Father.

The question of this post is improperly posed. Proper liturgy is not a question of how we "like" it to be "performed". But rather of how we have received it, so as to reflect the heavenly liturgy.

What's "right" is what's consistent with tradition, with the liturgy as developed by the Church in our rite under the influence of the Holy Spirit down through the centuries. That tradition has been misrepresented or ignored almost everywhere in recent decades does not make it right.

Nor is it a question of EF versus OF. Both should be celebrated in a manner consistent with tradition, as Pope Benedict is modeling with his papal liturgies (if only those celebrated under his personal jurisdiction within the confines of St. Peter's Basilica).

For instance, I could argue that Sunday's Mass of the Epiphany, which can now be viewed at

was celebrated as consistently with tradition as any pontifical EF Mass we see nowadays (though not precisely in the same manner). And indeed I would suggest that it demonstrates that papal liturgy in the OF can be just as magnificent as in the EF. Not only was it -- as Jeffrey Tucker quoted someone, the "most splendid papal liturgy Rome has seen in 50 years", but it was arguably as splendid (discounting personal preferences) as one sees in old pre-Vat II videos.

I find it ironic that some who view the Mass as a performance also feel the need to scream about being "excluded" from participation. One does not go to the theatre with the expetation of being a part of the show.

'Perform' is one of those English words whose original meaning has been overlaid by other connotations, mostly theatrical. It really means to do or to carry out, not necessarily to show off or draw attention to oneself. If we obstruct a police officer in the performance of his duty, we commit an offence; there is no suggestion that PC Plod is going through a song-and-dance routine before he hands you a speeding ticket.

Thus the liturgy is performed, with each taking his proper and allotted role.

8. Celebration of the OF using only the Roman Canon (Eucharistic Prayer #1);

9. Celebration (at least of the canon) ad orientem, rather than versus populorum, something starting to catch on in a few places - and, short of this, adoption of the "Benedictine" candle arrangement on the altar;

10. Use of more traditional server vestments (cassocks and surplices) instead of rope-cinched white albs;

11. Restoration of more (traditional) sacred art in sanctuary renovations, up to and including altar rails and restoration of the tabernacle to the main altar;

12. Reduced resort to Extraordinary Ministers (EMHC's), or indeed even elimination, when the congregation size permits it.

As more and more priests are ordained with some exposure and interest in the EF, I expect we will see lots more of the above over the next decade or two.

EMHC did not appear in England until the 1980s. At the same time Communion in both kinds became far more widespread. The bishops were keen to give women a visible 'ministry' at a time when the Church of England had admitted women to the diaconate and was considering ordaining them as priests. In other words it was all about 'gender politics'.

I picked up a snippet of conversation outside the Birmingham Oratory - a family saying that they preferred to worship there (understandably, given the quality of music and liturgy) but had moved to another parish because their daughter wanted to be 'on the altar'. Sad, really.

I know of a London church which had 'serviettes' but simply stopped recruiting any new ones, on the grounds that there were enough boys interested. They are now 'boys only' as a result of natural wastage, and offer the EF every Sunday.

What about ushers being exclusively female? The mothers in my new Parish line up their brood with hardly a whimper and have them in the pews, kneeling, etc. like a marching band. That could be a good visible role and the right ones can 'Mother' us into place.

Because, rcg, ushers belong at weddings. Ordering the faithful about, telling them when to go up for Communion etc. is another post-V2 aberration. In the best churches it does not happen.

I have just read the article posted on the PrayTell blog which uses the term 'performatism'. It is written by someone called Audrey Sheah, who describes herself as a 'liturgy major'.

I have to say that in 45 years of academic study I have read a lot of nonsense masquerading as 'cleverness'. But this takes the biscuit. It is utter moonshine, nonsense on stilts, devoid of any historical, theological or liturgical research worthy of the name, riddled with errors and inconsistencies, in short the pretentious and jargon-ridden outpouring of an egotistical mountebank whose self-importance far outweighs her intellectual acumen, which is nugatory.

Words fail me (for once).

Re the picture with its caption, "if this isn't relative, I don't know what is," I have to ask: relevant to WHAT (and to Whom), Father?

Isn't that the Big Question that has also become, thanks in good part to the "Spirit" of Vatican II, the big, fat Elephant in the Room?