THE RAISING OF BLOOD PRESSURES AND ANGER 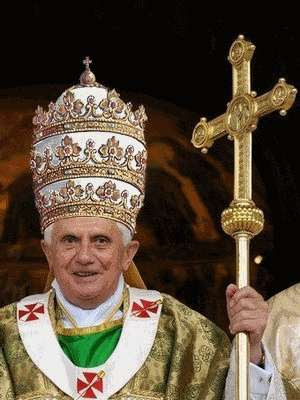 What is it about the photo above (probably photo-shopped) of the Holy Father, Pope Benedict and below of the good Bishop Alexander Sample, now Archbishop-elect of Portland, Oregon (home of Oregon Catholic Press, OCP), that makes those who have tried mightily hard to deconstruct the Catholic Church and her liturgy and re-imagine it (her) into something else, become apoplectic? And those who have done this have demanded "obedience" as though their theology and their interpretation of Vatican II are infallible. And usually these people who demand obedience and see themselves as the infallible interpreters of Vatican II are not even bishops.

Bishop Alexander Sample of Marquette, now Archbishop of Portland, Oregon. Congratulations to His Excellency and to the people of his new archdiocese: 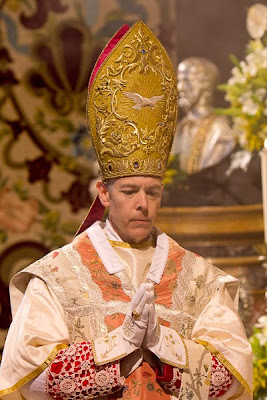 And this is sure to raise blood pressures in the infallible left wing of the Church when is comes to obeying their authority in all things liturgical and their interpretation of Vatican II, its notes and some of its bishops. This is in the Diocese of Madison, Wisconsin where their bishop, Bishop Robert C. Morlino has encouraged ad orientem for the Ordinary Form of the Mass and where taking to heart their bishop's admonition, St. Mary of Pine Bluff has Officially Made the Move. East (as reported by The New Liturgical Movement). This means that all their Masses in the Ordinary Form are ad orientem. Can you imagine the progressive liturgists, living and dead, who are now twisting in agony? Delicious, isn't it? A view from the loft facing the liturgical east:

Now, do you really want to get blood pressures rising? Progressives in the Church would certainly applaud the following teaching from Vatican II but only when it confirms their ideological positions. The same for conservative Catholics. Fortunately, it is the pope who has the authority to teach and demand the following:

In Vatican II's document Constitution on the Church, the Council was very specific about the relationship between the faithful and those in the government of the Church: “In matters of faith and morals, the bishops speak in the name of Christ and the faithful are to accept their teaching and adhere to it with a religious assent.” Of course there's nothing new here, this is simply a reiteration of Vatican I and certainly a Vatican II teaching within continuity of what preceded this council.

Then the Council continues:


Of course, Catholics give much more authority to the media and celebrities when it comes to faith and morals. You can read one person's opinion about this and the deleterious effect it is having on the Church and from which I took the above quotations by reading The Catholic Thing article:

Abp. Sample's ensemble is hideous. I hate it. The items do not work well together at all.

For one, he has a rose chasuble on with white vestments. That is just wrong or, if their reasoning was that it contains white, bad taste. If it was switched out for a white chasuble with some simple gold decoration or a golden chasuble, the outfit would work much better.

Furthermore, it is much easier to have only one or two decorated items instead of all of them. If more decoration than that is wanted, the items should coordinate well together, except the mitre, since matching mitres to chasubles looks stupid, kind of like double denim. This outfit coordinates poorly. I suggest that the gloves be plain, with only a small cross or a smaller version of that Jesuit sunburst thing on the top side.

I generally attack the "vestments should be plain" argument, but simplicity (rather than plainness) DOES have a place, and this outfit could use a sprinkling of it.

ytc - I think Good Bishop Sample was standing downwind of an ecclesiastical goods store when a strong wind blew through town...

I like the vestments on soon to be Archbishop Sample. If OCP can start publishing the actual propers of the Mass...THAT would be a huge achievement.

It is a white chasuble with what appears to be a pink or orange orphrey on the front. I don't care for it, but his Lordship presumably had to put on what was laid out for him, so blame the sacristan.

At St-Eugene, Paris 9e, on the Feast of the Assumption last year, the priest wore a magnificent chasuble with the royal coat of arms emblazoned on the front. Domine salvam fac Galliam!

I can hear Pater Ignotus sharpening the blade of his guillotine ...

John - No guillotine, but maybe a pair of pinking shears, a length of attractive fabric, and a sewing macine.