EVEN BLAH CAN BE MADE TO LOOK REGAL

This is my sister Mary Elizabeth's wedding to my brother-in-law Bob Smith on July 9, 1966 at St. Joseph Church in Augusta. Please note the new altar placed in front of the old for the Tridentine Mass facing the people, but note how the old altar is still majestic looking in its Tridentine decor. What's interesting about the new altar is that its legs are longer on the front to straddle the three steps to the old altar and the priest still stands facing the people on the same level as the old altar. Later the old altar was pulled away from the wall, lowered one step and placed on the edge of the second step and stripped down and the tabernacle placed on Mary's side altar and the celebrant's chair directly behind the altar--it all became truly blah! 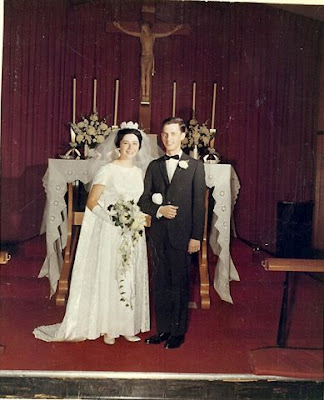 Let's face it, most parishes cannot build Gothic or Romanesque churches. Most have to build simple buildings. In the past, prior to Vatican II, these simple structures were still rather elegant because the parishes followed strict guidelines for the sanctuary.

For example, the parish in which I grew up, St. Joseph Church in Augusta, was a typical low ceiling, A frame building. It was cheaply constructed but had exposed painted wooden ceiling beams in the A frame style.

What made it warm and attractive and very conducive for Mass and private prayer were the following norms at the time that the pastor followed in building the church.

1. The sanctuary was up one step from the nave, but the altar was up an additional three steps to accommodate the movements of the Tridentine Mass. Although the altar was an extremely simple marble structure, it was placed against the back wall and had the traditional six tall candlesticks for high Mass and two smaller ones for low Mass.

Above the crucifix and altar was a "corona" which had lights in it, but made the ceiling above the altar look different from the rest of the ceiling. It was not a work of art, but served a liturgical purpose and I believe that in pre-Vatican II times every altar was to have some kind of canopy/corona, even if very abbreviated, above the altar of sacrifice.

They used very nice altar clothes that hung slightly over the mensa and were very attractive but differed when changed.

2. There was a very nice, large crucifix on the back wall above the crucifix and a very lovely drape, in a red color, custom made for the wall and the crucifix.

3. There was a very simple altar railing and two side altars, one for Saint Joseph and the child Jesus to the right and to the left was the Blessed Virgin Mary's altar. Each side had votive candles.

That was it, the stain glass windows were simply colored glass and quite cheap at that, but I love that little old church, which has since be replaced with a more modern one and it turned into a social hall. In fact, I made my First Confession, First Holy Communion, Confirmation in that old Church, my sister was married there and I had my first Mass there and my father's funeral was there.

Here is another church, much more elegant than the one I describe from my childhood which undergoes a transformation.

Here is the before look toward the sanctuary: 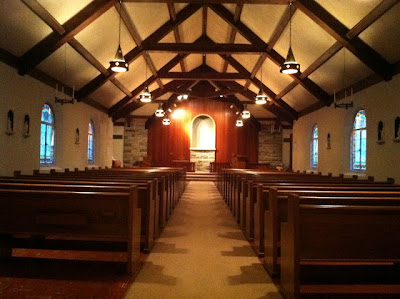 Here are two after looks: 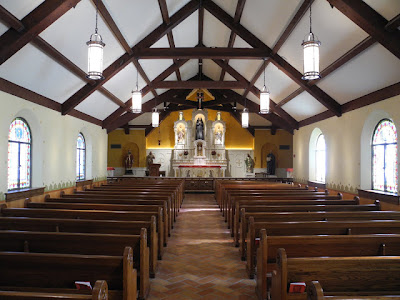 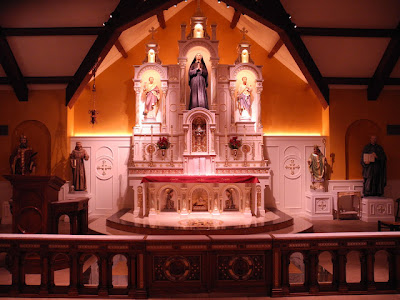