LANCE ARMSTRONG IS FAR FROM THE ONLY DISORDERED HUMAN BEING IN THE WORLD, HE JUST LOVES THE LIME LIGHT THAT BATHES HIM IN HIS GLORIOUS DISORDERS AND DISORDERED LIFE--BUT IF YOU WANT TO BE POLITICALLY CORRECT ACCORDING TO TODAY'S SECULAR SPIRITUALITY, DON'T USE THE WORD "DISORDERED" TO DESCRIBE ANYONE OR YOU WILL BE CENSURED!

Face to face confession with the high priestess of the "religion of being spiritual but not religious" Mother Oprah Winfrey. Now all is well with Lance and the world and he's gotten his "wicked web he's weaved his whole adult "lie" off his chest. Doesn't it make you feel good? 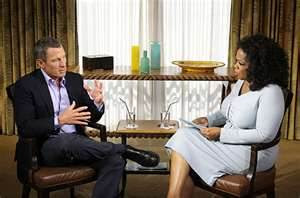 "Oh what a wicked [tangled] web we weave when first we practice to deceive."

Reality shows are the in-thing in television entertainment. They are cheap to make and cheapen us human beings by exploiting our faults and turning us into fodder for voyeuristic entertainment.

Oprah Winfrey has perfected her new "religion" of being spiritual but not religious which is a "universal" sort of religion for all people, kind of like what the Unitarians have tried but failed to accomplish.

Being spiritual can be interpreted in any way one wishes and justifies just about any kind of behavior except "intolerance" for sin. If we Catholics and other Christians say love the sinner but hate the sin, that would be offensive to a "spiritual" person who believes that the sin is what the person is because the person does this, that or the other.

Yet Oprah has also perfected her "sacrament" of "confession" by eliminating the need for God's forgiveness and the need to be reconciled and forgiven by the Church (her members) who have been scandalized and given poor example by the grievous sins of her members especially those of a public nature, what we once called "public sinners."

So the "sacrament" of "confession" we see on shows like Oprah's and Jerry Springer's are actually not signs of seeking forgiveness but braggadocio.

It is therapeutic for the person to go public and on national TV not only for their few moments of fame or infamy but also to make them feel good that they've gotten it out in the open.

True sacramental confession by a repentant sinners is usually accomplished privately within the context of the "seal of confession" and one acknowledges to God and the priest who represents the Church the need for forgiveness from God and the Church in order to be reconciled to both.

So what do we make of Lance Armstrong? Is he the poster boy for do-it-yourself spirituality and religion where public and private morality are determined by what one gets out of one's sin or lifestyle? Where is God and Church in his life?

The Catholic Church knows that Lance Armstrong is far from being alone in his sin. We are all in the same boat, some more seriously "disordered" than others, but all of us are disordered to some extent by the original sin of Adam and Eve that we have all inherited save the Blessed Virgin Mary.

The Church is thus for people like Lance Armstrong who through the Church and her Savior Jesus Christ and His sacraments seek God's sanctifying and actual grace.

We find our only hope from the escape of the "disorderedness" of our lives in Jesus and the gifts of faith, hope and love that God offers us and the grace He gives us to rise above our disorders and to live ordered lives according to Scripture, Tradition and Natural Law.

Confession without repentance is bragging. Was Lance bragging? Pray for Lance and all sinners and "if not for the grace of God so go I."

The case of Lance Armstrong may pose a more subtle moral question than posed in TV discussions. Obviously he was a public liar for years, including under oaths presumably taken on the bible.

But was his use of performance enhancing drugs itself immoral? Was it cheating, in the sense of taking an unfair advantage? If, as I take it, every cycling competitor was expected to use such drugs, every one did it, and everyone knew it.

In case the competition was quite simply one of drug-enhanced competition, plainly and openly, and no one was taking secret or unfair advantage of anyone else.

Just as in stock car racing, I take it the real competition is not so much one of driving skill, as to see which car's crew of mechanics fan best enhance its performance by engenious adjustments, etc. In which case, such "artificial" enhancements of car performance do no constitute cheating.

So in what way is the artificial enhancement of the cyclists body performance cheating?

I pose these questions, admittedly knowing little of either cycling or stock car raising, but something of moral law.

Father I agree with everything you wrote.
And I will add my two cents worth.
If Lance isn't Catholic, then going VERY PUBLIC with his 'confession'is about as close to the real thing as knew how to do.
If he enjoyed the limelight, well...prison is going to throw a bucket of water on his personal ego parade.
~SL

I am really not sure what all the fuss is about. Athletes. are paid millions of dollars to entertain us and then we get upset when they use that money to do things that disappoint us. I believe this story is more about the media looking bad than it it about Lance Armstrong's failing.

Henry, I think you are asking a leading question because yes, it was cheating and lying. The act itself is not so bad: using your own blood to boost you energy. But it was against the rules he freely offered to follow. So no more than I expect a Methodist to understand and follow our rule of say, fasting before Mass, I must and will do it because I told God I would. Extrapolated to the Liturgy it addresses our concern with the sloppy way NO Masses as often done when we know better.