MORE LITURGICAL MUSINGS AND HAPPY NEW YEAR IN OUR LORD, 2013 AND A BIT OF A GOOD RIDDANCE TO 2012!

Yes, Virginia, this is the Ordinary Form of the Mass, completely in the vernacular which is the manner in which St. Joseph Church in Macon celebrates its Ordinary Form 12:10 PM Mass each Sunday, what we call "the new normal." The photo below was last Sunday's 12:10 PM Mass for the Feast of the Most Holy Family of Jesus, Mary and Joseph: 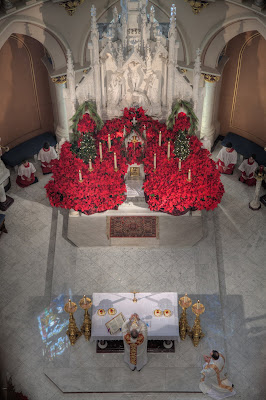 Now I realize there are some out there that think we should get rid of the free-standing altar, which I love very much, BTW, which of course I have to vociferously disagree. The old high altar is unseen in the side transepts of the church, the new altar is seen by all, even by those on the front pews in front of the side altars.

Rather, the sophisticated eye should see the free standing altar and the old altar as one unit and the old altar now becoming the reredos to the new altar. So it is quite appropriate to treat the old altar as a complete reredos for candles, decorations, flowers and the like. This photo by Dr. Buck Melton may become next year's Christmas card sent to all parishioners by yours truly.

Now for some musing on 2012, Annus horribilis but not completely. 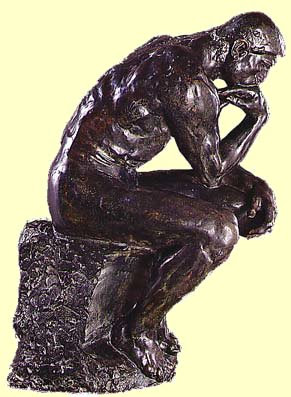 It started with a very nice vacation to California in January and went down hill after that. The most horrible aspect being the death of my mother on September 18th one month shy of her 93 birthday. When you have a family member living that long, you start to think they'll be with you forever. I am grateful to God though that my mom was able to live in her little townhouse all the way up to September 1st and on her own. I am very grateful to my sister who took special care of her and made sure all was okay everyday and I am grateful I could come home each Sunday night and leave early each Tuesday to return to Macon. I was able to spend quality vacation time in Augusta with her, two weeks worth, in July. That was and is a blessing to me and she was doing quite well at that time.

There is a relief though, although the relief brings a bit of guilt. You begin to wonder how it will all end and anxiety builds about that. Would it be a fall that breaks her neck, her hip or her head? Will it be long, drawn out and painful? My mom died of congestive heart failure in bed and I think unaware of what was happening and it was relatively quick. And in her three weeks in the hospital and rehab I thought she would recover and get back home.

There were many very lucid times and she fought with determination, forcing the nurse at rehab to get her out of bed so she could walk to the toilet and fighting with her until it happened, and that was the last time she would get up for less than 48 hours later she was gone--that's my Italian mom! Her last words to me were "take care of my cat." I took that to mean in the sense that Vito Corleone in The Godfather would have meant it. And her cat and my mom were buried together, the first Catholic Requiem that I know of that I've had with such an arrangement! My mom was worried about her 16 year old monster cat that bit her constantly and brought her to the emergency room more than once and one time requiring surgery on her hand because of an infection where the doctors told us that if the infection was in the bone, she might lose her hand. But she loved that mad cat!

I would tell her when she worried about what would happen to that cat when she passed that the cat would go with her. She said, that's a good idea!

In August, another Italian in my life, Cheti Warner, died much too soon. She had been my parishioner in Augusta, our hospitality person, cooking marvelous meals for the rectory's special events and all of our major receptions, some full meals for hundreds of people.

She cut my hair for the past 20 years too and revived an Italian custom my non-Italian father had forbidden in our American home, La Befana who is a good witch who fills the stockings of good children with candy, toys, nuts, fruits and the like on Epiphany. Bad children would get a lump of coal. I always got the goodies! This will be my first Epiphany in about 15 years without La Befana!

Sometimes friendships too come to an end and like a death can be unexpected, sad and out of the blue.

But 2012 was a special year of grace too and what a gift the Catholic Mass is and our Catholic faith which includes hope and love.

The liturgical highlights are all the special Masses we've had here, Shubert's OF and EF Mass for St. Joseph and Annunciation; the Clergy Conference with our bishop where our choir sang a splendid Solemn Sung Evening Prayer the night before our Solemn Mass for Christ the High Priest with our bishop and all his priests. While we videoed the Mass, I failed to have the Solemn Sung Vespers videoed which was a grand mistake, although our choir sang Solemn Sung Vespers for our Bishop's ordination, the night before at our Cathedral which was videoed. I would say this clergy conference was a highlight for me for the year.

Of course we had our annual Faure's Requiem as an EF Mass for All Souls, truly splendid and uplifting. We celebrated the Nativity of Saint John the Baptist as a hybrid of Latin and English in the Ordinary Form Mass at our regularly scheduled 12:10 PM Mass and with the Liturgy of the Eucharist ad orientem and as a precursor to this Mass being celebrated ad orientem each Sunday which began in October and is pictured above.

Finally as I look forward to 2013, one of the highlights of this New Year in our Lord will be my sabbatical which will be from September through November and at the North American College in Roma, Italia. This will include a tour of the Holy Land in late October. It will be a full regimen of theology and Church history, Bible history classes. I'm very excited and can't wait to spend this amount of time in my country of birth and to improve my Italian. I hope to get it from a 5 year old level to at least a 10 year old's! As well, since my mother was an Italian citizen at the time of my birth in Napoli, Italia in 1953 I hope to seek "dual citizenship" by seeking citizenship in Italy while I am there. I actually have an Italian birth certificate, although technically I became an American citizen at the time of my birth because my army father was an American citizen, but naturalized too. I actually have naturalization papers also that were given to me when I was six years old, with a picture of me when I was six to prove that I am American. But I've always felt Italian for some odd reason.

So how does one get a sabbatical such as this?

Father McD, have you ever thought about this for a new years resolution: Put together an email about your "Ordinary Form celebrated Extraordinarily" that would be part intervention, part education, and part inspiration, and then send it to your brother American priests to inspire and move them to get out of the dismal funk that is the casual, folksy, quasi-protestant celebration of the Novus Ordo in sparse and plain auditorium churches with small wood kitchen table altars and GIA hymnals.

How would you get the email addresses of priests you need to reach? By this blog. Put up a sidebar box on "Southern Orders", where your readers who may belong to such a casual, quasi-protestant spirit of Vatcian II parish, can leave their pastors' email addresses (which you would obviously not post to the public), and then you could contact them with your email pitch. This would be a great way to reach out to your brother priests, and to help the typical parish stuck in the rut and rot of Gather hymnals and hand holding, praise and worship services, instead of a true Catholic Mass.

Additionally, you are a great example of love and devotion to one's mother. Thank you for that.

How do you get the awesome arial shots? Is it an automatic/roboticv thing, or does someone get up there somehow?

RCG the priests of our diocese are eligible for a sabbatical after seven years of service but can only take two in a lifetime and usually for a semester period at a time (when I was ordained in 1980 the policy was for a full year but that was changed later). I've not had a sabbatical so this will be my first, I'll take another in 33 years! The Roman Program has a very long history and is quite popular.

Ben, our church has a cupola and on Sunday Dr. Buck Melton fearless may his way there which means a bit of gymnastics and took these shots. He also did the same a couple of times before and once for an EF wedding I had. It is somewhat dangerous to do, especially if one has vertigo. Falling from the cupola during Mass makes for unnecessary distractions and a mess during Mass!

Fr., wonder what made him think to climb up there to begin with?

Probably got up there on a hunch.

Father, I second Dan Z's motion that your should reach out to other priests to try to win them over to the "new normal", as you call it.