THE ELEPHANT IN THE ROOM (CHURCHES)

This type of Catholicism is doomed to failure because it is bogus and it is corrupt: 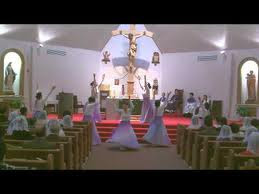 Catholics who are reverent and modest are young and vibrant and the wave of the future and this scares the beegeebees out of old Catholics stuck in the '70's: 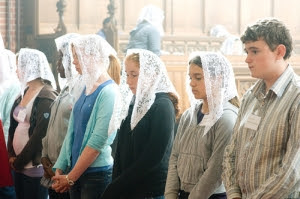 I copied the following from Linen on the Hedgerow Blog, which you can press here to see:

(My comments will be interspersed in the text below and (ITALICIZED),with final comments at the end).

I'm sorry to snaffle the old aviation joke but it rings true for the state of the Catholic laity today.

They embraced the new religion much as, in Reformation times, the population embraced Protestantism.

The mantra went up a la Animal Farm, 'New good, old bad' and that has now become so embedded in the liberal psyche that many modern Catholics will challenge the Holy Father and Church Doctrine on all matters that, fifty years ago, would have been obediently accepted.

(This is certainly true and I recollect it very well and saw it occur in many families and divided many families as well--what a pity! That didn't have to happen with the correct implementation of Vatican II and a less rigorous revamping of the Mass and its theology!)

Two comments that I have heard in the past couple of years from liberal Catholics;

Both are unacceptable and the latter is most certainly untrue. But what is it that provokes such antipathy?

(Just read publications like the National Catholic Reporter and liberal or progressive blogs and those who comment on them and you will see this outright rejection of what is essential to Catholicism. It makes one wonder if they have not left the Church in fact but want to corrupt the Church they left by remaining. Isn't it time for honesty from these people??? Does an take an act of excommunication to make their reality true, why can't or won't they do it for themselves? There is a sinister aspect to all of this and Pope Paul VI hit the nail on the head when he said "the smoke of Satan had entered the sanctuary!")

We could now debate the decline in moral values and increase of relativism but that is not really my point. The fact is that those who stand up for the Faith today are not the children of the sixties but the new generation; children of the 80s and 90s.

Look at the 70 and 80 year old liberals and you see bitterness, regret, paranoia and the sins of Adam and Eve reflected in their faces; pride, envy and jealousy of God. All are gateways to disobedience.

(I've written it before and I'll write it again, my generation of Catholics my age and older are rabidly fearful of the new direction of Catholicism either because they now know they swallowed the Kool Aid of the 1960's hook, line and sinker and thus allowed themselves to be duped, or they are the ones who duped others, the latter having a higher price to pay come judgement day!)

And, most poignant of all, it is those who follow the liberal theology who are now classed as old fashioned and outdated.

Dancing on the sanctuary, standing to receive in the hand, obliteration of the Sacrament of Confession, chattering in Church, extraordinary ministers - all look as topical as flared trousers and men's ponytails.

Reverence, humility, obedience and the old rite of Mass are all cutting edge.

MY FINAL COMMENTS: If we follow our Holy Father and his interpretation of Vatican II as "reform in continuity" we will have the correct recipe for regaining the essentials that we lost in our Catholic culture over the last 50 years.

If we follow our Holy Father as he models the celebration of the Ordinary Form of the Catholic Mass, we will also recover the traditional culture of piety and reverence that marked our Catholic Churches prior to the Council and which the Council never intended to overthrow.

We can have reverence, humility, and obedience from the majority of Catholics, both lay, clergy and religious, in the Ordinary Form of the Mass celebrated as Pope Benedict celebrates it, if only we could have that in every Catholic parish throughout the world.

Then true renewal would take place and in 50 more years time, the Catholic Church would have recovered so much that has been lost and corrupted these past 50 years.

One of the results of this division of Catholics into retro-traditionalists (for lack of a better term) and aging liberals is that the aging liberal model has become a type of Protestantism.

Mass facing the people suddenly changed the game for many priests and laity and the focus, when taken off of Christ, has to go somewhere, so in most cases, it goes to the priest. The priest as master of ceremonies, now has to be the entertainer. He is much more self-conscious.

A hallmark of "Bible-believing" fundamentalists is that most of them consult their pastor far more than the Bible. In fact, churches rise and fall because of the quality of Protestant pastors. So too, have the liberal Catholics taken the same position. Forget what the Bible says or what the Church teaches, all that matters is what Monsignor X says. The result is a cult of personality around certain priests. If the cult is strong enough, many Catholics fall away from Mass attendance when the priest is eventually transferred.

Another disturbing result of this Protestantized version of the faith is that many Catholics believe that they have "been saved" in the Protestant sense. Instead of a great hope for their salvation, they believe it's a done deal. There is no reason to be reverent at Mass, go to Confession or hold oneself accountable because everybody's going to go to Heaven, no doubt about it. So you see Father Y and his favorites in the Church yucking it up loudly before Mass, humility and piety be damned.

God has confounded the arrogant with the rise of new young Catholics who want their Church back. And they will get it.

Amen to that and you hit the nail on the head!

If "rupture" Catholics, especially those in positions of authority within the Church, would just show some toleration for the inclinations of the "reform" Catholics, then I think we could establish a sort of intra-religious dialogue. In other words, they should show us at least as much respect as they show Buddhists and Muslims.