MORE FROM THE CARDINAL PREFECT FOR THE CONGREGATION OF DIVINE WORSHIP 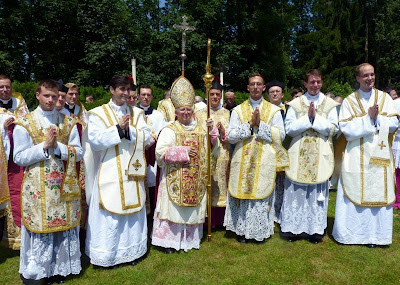 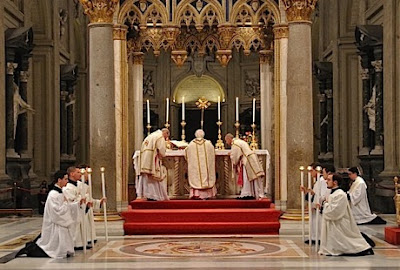 The National Catholic Register is reporting more of what Cardinal Antonio Canizares, prefect of the Congregation for Divine Worship, said when he made this statement on Jan. 15 in response to questions from reporters after he delivered an address on the Second Vatican Council at the Spanish Embassy to the Holy See.


The following are excerpts from the National Catholic Register's article:

Cardinal Canizares later spoke with a reduced number of reporters and further amplified his remarks about the Lefebvrists and the Paul VI Missal.

He elaborated on the idea that if the schismatic archbishop had seen the new Mass celebrated properly and reverently he might not have rejected it.

“Even the followers of the Society of St. Pius X, founded by Archbishop Lefebvre, when they participate in a Mass that is properly celebrated, say, ‘If things were this way everywhere, there would have been no need for what happened and for what really caused this separation,'” he said.

The cardinal went on to explain that Vatican II offered more than simply changes.

To show that the liturgy should not be a cause for division, Pope Benedict XVI published the motu proprio Summorum Pontificum in 2007 to establish universal use of the 1962 missal.

The Holy Father has taken several other steps towards reconciliation with the Society of St. Pius X.

On Jan. 21, 2009, he lifted the excommunications imposed on the four bishops ordained by Lefebvre in 1988, including Bernard Fellay.

In doing so, however, he stressed that they should give “full recognition to the Second Vatican Council,” as well as to the magisteriums of the popes after Pius XII, as a condition for full communion.

In addition, Pope Benedict XVI gave the society the chance to end the separation in 2011 by accepting a "doctrinal preamble."

In 2012, the Pontifical Commission “Ecclesia Dei,” charged with the ongoing dialogue with the Society of St. Pius X, announced that the society had requested “addition time for reflection and study” of the proposed preamble.

The Neo-cons are so quick to pin everything on the liturgy.

While the liturgy is one of the four major reasons for the strife that we face today and very clearly the most visible, it is important to remember that we shouldn't boil this all down to just the profound abuse of the Mass. There are other issues which are just as important to recognize, discuss, and rectify. Namely:

These issues are just as important as the liturgical issue which exists. If these issues can be cogently discussed and rectified, a reconciliation with Rome and a move toward an authentic Reform of the Reform is merely a formality.

This has been the drum for all traditionalists since 1970. This is nothing new and shouldn't be a surprise to anyone. I would love to see a serious discussion on these topics, becuase I think that the fruit to be gained from it is immense, but in order to have this discussion, some very real issues must be discussed in very open and charitable way. Until this happens, I think that the rifts of all four issues will remain open.

I absolutely agree with Andy Milam's comment. I'll accept whatever the Church says I need to accept about Vatican II, but a lot of it does seem ambiguous.

"He elaborated on the idea that if the schismatic archbishop had seen the new Mass celebrated properly and reverently he might not have rejected it."

Not sure about that. (Ottaviani anyone?)

Fr McDonald may not agree with me, but I think the Mass of Ages is the True Mass and more graces necessary for the life of the soul flow from it.

Yes, I go to the Novus Ordo regularly, but I think, in my experience, the difference between the two Masses is like organic and junk food.

I just feel that after I've attended the Latin Mass I can live a Catholic life more easily.

Why can't the Vatican just come out and admit it? There was nothing wrong with the old Mass. I'm OK with the vernacular. Why don't they just get priests to read the vernacular side of the Latin Mass? As for the argument that the Novus Ordo was more ecumenical - why not let the Protestants have the TLM to nourish their souls. Sheesh.

Andy Milam,
I think I may agree with you somewhat. For example, if we cannot say clearly and consistently that Christ wants everyone in the world to join his Catholic Church, then what is the final goal of our ecumenical efforts? To put it another way, if a man tells me his religion is the truest one, then I can have an honest dialogue with him. But if he tells me his religion is no truer than any other, then why is he wasting my time?
That said, the Vatican has made it clear since Vatican II that the Catholic Church, and only the Catholic Church, contains "all the elements that Christ himself instituted" ("Responses to Some Questions Regarding Certain Aspects of the Doctrine on the Church").

With regard to Ecumenism, I think that we absolutely must return to the proper and traditional understanding of what we're talking about and that isn't "ecumenism," but rather; religious tolerance with a goal of reconciliation and conversion.

My position is this:

1. When dealing with other Christian sects, other than the Orthodox, we must view this as a matter of CATECHESIS. It is rehabilitating a heresy, namely Protestantism. This also encompasses the continued catechesis of Catholics (faithful and dissenting) as well.

2. When dealing with the Orthodox, we must be Ecumenical. While they are in schism (let's not forget the excommunications were lifted), they are an authentic Church with apostolic succession. Insofar as this is the case, the manner by which we deal with them as a matter of rehabilitation is a very precise form of catechesis. It isn't about rehabilitating a heresy (in all cases), but rather it is about reuniting a Church to which has split.

3. Evangelization is how we must deal with the non-Christian, including the Jews.

The understanding of Religious tolerance has almost been completely usurped by the idea of "ecumenism," which in my view is not consistent with tradition and is the second major spur of the hermeneutic of rupture.

We must return to proper definitions. The Church operates off of definitions, so we must properly define those things which are applied. Improper and incorrect definitions lead to error and ecumenism, as defined by Vatican Council II assumes that all other ecclesial communions and non-Christian faith traditions are Churches. That is simply not the case.