WHEN IT COMES TO BOTH FORMS OF THE ONE ROMAN RITE, WHAT IS ALLOWED AND WHAT ISN'T

The right side of this architectural rendering shows how the altar area will look when the new altar railing is installed. The left side shows how the Church is now and how far the first step will be extended into the nave and toward the current set of pews. As is very clear in the drawing a place for wheel chairs and handicapped persons remains as it is now and exactly and the three step ascend and decline will be much safer for persons with knee and leg issues and more so at the side chapels which these people may use, especially descending the altar which is more of a challenge currently with the three and four steps we currently have. This is all about safety also. 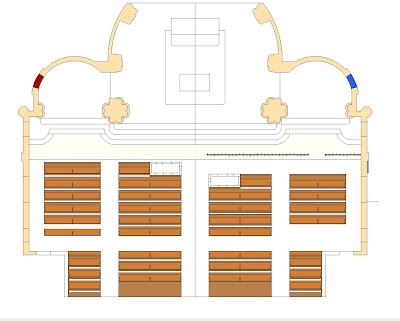 The same is true of Holy Communion on the tongue or in the throned hand--both options are equal and the choice is the communicants, not the ordinary or extraordinary minister's. The Extraordinary Form of the Mass does not allowed for EMHC's nor for Holy Communion in the hand, the the norm is to kneel unless there is a physical reason for the exception of standing. There is no option to receive in the hand but one should not be denied this given the fact that it is allowed in the Ordinary Form, but some liturgical instruction or correction should be given to those who approach to receive Holy Communion in the hand at an EF Mass.

Extraordinary Ministers of Holy Communion are appointed at the discretion of the pastor and he alone determines the need liturgically and must follow the norms for them at Mass. We will continue to have four host stations at every Mass here, necessitating at least two to three EMHC's. At our 9:30 AM principle Mass of the parish, we have an additional six chalices necessitating ten to eleven EMHC's when there is only a priest present and no deacon or installed acolyte. This follows strictly the GIRM as well as what is allowed to me in the privileged place of being a pastor in terms of making these decisions. Folks its canon law, we are not a lawless Church and we are not ruled by mob!
Posted by Fr. Allan J. McDonald at Sunday, January 06, 2013

As for me, I will not promote insubordination...so no worries about whining from me.
and..
I WILL ALWAYS KNEEL TO RECEIVE OUR LORD.
hopefully, this will serve as witness-in-action and help & encourage others who also so desire to feel less 'oddball out'.

I wonder if you could clarify a point for me (and perhaps for others too). When I have attended the EF I have received kneeling on the tongue. However, when attending the OF at St. Joseph’s I receive kneeling but prefer to receive in the throned hand. It has been my understanding that this is permitted. Because of where I sit, I have received from an EMHC. I make my desire to receive in the hand very clear by extending my hand before kneeling (this seems to be clearer than waiting until after kneeling given the speed at which things are done). Nevertheless on several occasions I seem to have caused some confusion in the EMCH. On at least one occasion I have retracted my hand because the EMCH intincted the host and received on the tongue instead. This has made me wonder whether I am wrong in thinking that receiving in the hand while kneeling is permitted. I thought from your explanations it was, but perhaps I misunderstood. Even if permitted, I assume from my experience that it is a rare combination. I want to avoid acting incorrectly and I also have no wish to cause a problem. Therefore I seek your guidance. Thanks.

definitely you may receive in the hand while kneeling at the OF Mass. I will instruct the EMHC to pay closer attention, perhaps they weren't and also the ciborium we hold hides the hands when kneeling, so that could be part of the problem, but if you make it clear as you are kneeling hopefully they notice that!

Thank you, Father. I appreciate your clarification and your help.

"There is no option to receive in the hand but one should not be denied this given the fact that it is allowed in the Ordinary Form". There is an obvious contradiction here. Communion in the hand is never allowed in the EF. It is a good idea to remind the congregation of this beforehand (in the announcements which in the EF are just before the sermon). For those who might forget, the communion plate under the chin will serve to jog the memory.

In those churches where kneeling is the norm in the OF, whoever is holding the communion plate can see if the communicant wishes to receive in the hand and holds the plate accordingly. In the old days it was the custom in some churches for a communicant to hold the plate himself and pass it to the person on his left - this would be a neat way of stopping CITH at OF Masses!

A communicant has the right a) to receive on the tongue, b) to decline the chalice and c) to receive the Sacrament from an ordained minister. I exercise all three, but don't kneel if there's no rail - it's not the kneeling so much as attempting to regain the perpendicular.

By all means, Father, instruct the EMHC to pay more attention. God forbid you realize the people in the pews do not pay attention when you speak. I am an EMHC, I do the best I can with the "signals" I get from the communicant. If communion was not made so difficult at this parish with all the different methods and ways of receiving, there would be no problems.

Here's an idea, Father. Have an EMHC for intinction, one for those that want to stand for only the host, and one for those that want to kneel and only the host. That should make things easier and the EMHC won't have to guess who wants what which way. You know, when I was a kid, my mother served dinner to everyone and only one way and only one certain meal. There were nine of us. It seems to me the Church should be doing the same thing. Talk about cafeteria Catholics!!!D

I am sorry, I forgot one station for an EMHC. There should be one for those that want to receive by intinction while standing. That should do it.

If intinction is used it should be the only option (as in the eastern Church). One reason why it has not caught on is that it forces people to receive in both kinds.

Kneeling communion and EMHC don't mix. I will receive from a priest, deacon or instituted acolyte, but once you have knelt at the rail you have no choice.

At Westminster Cathedral they deploy two female EMHC at weekday Masses, even though the number of communicants is not large and the chalice is not offered. This is an abuse. Two people out of three opt to receive from the priest, leaving the Extraordinary Monsters with one-sixth of the communicants apiece. It's time the cathedral authorities stopped playing gender politics with the Body of Christ. No wonder people decamp to the Oratory.

EMHC's can't intinct...Intinction can only be done by the priest or the deacon.

But I'm of the opinion, intinction should be used at all Masses.

EMHC's can't intinct...Intinction can only be done by the priest or the deacon.

But I'm of the opinion, intinction should be used at all Masses.

I have only just read your comments. As I was the one who started this line of discussion perhaps I should respond. After describing my preference (receiving in the throned hand while kneeling) and experience, I said “Even if permitted, I assume from my experience that it is a rare combination. I want to avoid acting incorrectly and I also have no wish to cause a problem. Therefore I seek your guidance. Thanks.”

I was not complaining or criticizing but, first, wondering if I was acting incorrectly and, second, even if I was acting correctly, indicating my willingness to modify my preference to avoid causing the EMCH a problem. Of course, I leave it up to Father McDonald to decide how best to proceed and what guidance to give the EMCHs and to those receiving.

I know from the times I was asked to be an “ad hoc” EMCH (if that is the correct term) many years ago just how difficult it is – at least it was for me. I never felt really comfortable doing it and appreciate those who serve in this way.