WILL IT HAPPEN OR WON'T IT? 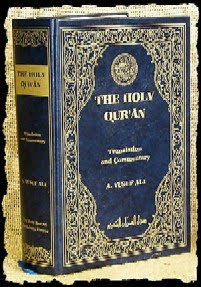 It is amazing to me that a small town fundamentalist pastor with about 30 people in his congregation is making world news because he intended to burn Islam's holy book, the Qur'an. What he and his little tribe of people wanted to do is reprehensible. But I really wonder if he deserves all the publicity he has received and international notoriety. How did this happen? I guess it spread through the internet and thus worldwide.

Yesterday it appeared that a deal was reached where he would relent and not burn these books and thus insult all of Islam. But that deal seems to be crumbling and no telling what will happen tomorrow.

I have been pleased with the voices of reason within Christianity asking that this pastor not follow through on his plans to burn the books. Even the Rev. Pat Robinson seems to be on the side of reason on this one.

This book burning does not upset me as much as it seems to upset others. Granted, it is hardly news worthy. On the other hand, if it were Bibles or US flags being burned, no one would utter a peep. I sort of enjoy the spectacle of those who hate us receiving a dose of their own medicine. And, hey, it is free speech...I know the libs hate that!

The enormous pink elephant in the lving room that everyone is ignoring is that we are in a war against Islam. No one wants to even whisper that, which is why we are losing.

An observation and a question.

Observation: One fringe Christian church with a congregation that would fit on a bus decides to burn a Koran and the world considers it news, yet active violent persecution by entire Muslim nations is either ignored or reported as 'unrest' and references to religious persecution expunged from the news.

The question: Are Christian leaders responding based on adherence to Christian teaching or is it a demonstration that we will adjust our behaviour based on the certainty of violence from Muslims?

If the world adjusts it's behaviour based upon the certainty of violence from Islamist fundamentalists, then what is to come of the world?
How about the Christian world simultaneously speaking out against this little pastor's plans and the hateful violence of the Muslims? Unless we also call Muslims to the carpet and quit being accomodating it's only going to get far far worse.

I could not condone burning of any books. How many books were lost forever in the early years of America because of such burnings! We can bury our heads in the sand and refuse to heed the signs of Islam! Our freedoms allow them to come and do as they please in 'our land' in the name of Freedom of Religion. Islam is the fastest growing religion in the world! Read guys, educate yourself what Islam is! Some say they are loving people who mean us no harm; it's Islamic Radicals we need to be aware of! Is it? If this book would have perished, it would of certainly meant deaths somewhere in the world in retaliation. Thank God this Pastor came to his senses. Once I read in a book supplied for instruction for Military Leadership Advancement: "Russia will become our friends to only crush us in the end!" This was after the 'Cold War' ended. Why would the military still teach this if they were fully trusting of the Soviet Union?! This has stuck with me for over 15 years since reading it. Be afraid folks! Like the military is still with Russia. Be afraid of Islam!

Rejoicing in the suffering of others - "I sort of enjoy the spectacle of those who hate us receiving a dose of their own medicine" - is a sin.

It is an morally bankrupt position for a Christian to adopt, as we are commanded to pray for those who persecute us and to refuse to return violence for violence, or rejoice therein.

I think the book burning is a petty little grand stand act which the pastor was as shocked as anyone to see go viral on the internet, and now it's controlling him more than he it.

At the same time I have no sympathy at all for all of the "oh it's an insult to the Muslim's" crowd. Where was global outcry by Islam when this attack on the Church happened?

The day we invaded Afghanistan I said to my co-workers that this war would never end until it had morphed into a full blown war between Islam and Christianity. I still believe that. We in the west are too ignorant to understand the threat Islam presents because I think we have lost touch with True Faith and as a society forgotten just how strong that force is. One thing in my mind is certain, they will not stop or rest until Islam is the faith of the people of Earth, or it has been wiped of the face of the Earth. Their faith doesn't permit compromise except as a means of advancement.

Equating the discomfort Muslims feel at seeing the Koran burned with suffering is setting the bar for suffering pretty low. I might also ask them to reconcile their reaction with their doctrine concerning idolatry. It is the same error made equating putting a bug in the room of a mass murderer with torture because he is simply not man enough to stand up to anyone but women and children.

These people hold themselves hostage to our civility. The single distinguishing characteristic of Christianity and especially Catholicism is the ability to objectively reflect on its own actions. That gift is one of the best examples of the Covenant as can be found. We can evaluate our our own actions objectively and hold ourselves accountable. More to the point these folks depend on our value system for justice due to the complete absence of their own. This is shown by their inability to find a gradient for justice in matters such as this.

This is no worse than laughing at a car stuck in the mud after the driver ignored instructions to avoid the puddle. It may be the only way some folks learn.

Well, Pio Nono, that is very commendable. So, then, we'll be praying for them as we gun them down in the streets one day. Cool!

This has been great post!!! I love I discovered your blog Fr.

~A good debate without violence or anger!~

Pinanv525 - Seems your heterodox brand of Christian Charity is more in tune with Pastor Terry Jones and his Dove Outreach Church. I'm sure you and your "gun them down in the streets" comment would be welcome there. This approach is not welcome in the Catholic Church as the teaching of our pope and bishops clearly shows.

I am sure that this is not what you are learning in your current Catholic Church and I hope that your pastor corrects you promptly.