Pewsitter.com picked up Fr. Z's post of my post on the breaking of the large host which spews particles and crumbs all over the place. In fact, as I state on the post below on this one, I was amazed as I sat at my desk yesterday morning breaking these hosts which I had intended not to waste but use on Sunday for the laity. As I was breaking the large host over my lap with my black trousers, I was amazed at how much of the host became air borne in both large and small particles and traveled some distance. It really was amazing and shocking to me. I've decided not even to give the broken pieces as Holy Communion--all of the large hosts are properly disposed never be be used here again.

But on the pewsitter blog, where Fr. Z's post of my post is located, right below it is a picture of the Holy Father consecrating the very same type of large Host on a story of the Blessed Sacrament that was stolen from a Church in Austria! How odd! Most people really don't know how much spews off of these hosts when broken; I know I didn't. 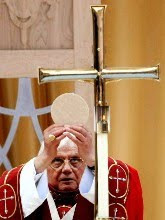 How much of the Precious Blood is lost to evaporation while the cup (or chalice, if you prefer) is uncovered?

Not to worry. That which evaporates ascends directly to God just like incense.

good point about evaporation. The Church also teaches that once the "accidents" of the Sacrament are corrupted or no longer appear as bread or wine, that the "accidents" are no longer to be considered consecrated. For example, Precious Blood on a purificator, once dried is not longer the Precious Blood and it cannot be reconstituted by putting water on it. The same with the Host, if it is moldy, that part is no longer consecrated.

Well, one can rationalize a bit here.

The Papal Masses require the larger Host to permit the faithful a view at the elevation. And the Altar at St. Peter's (and therefore the altar clothes and corporal) are quite a bit larger. One can hope that even the breaking of a larger host could be contained within that area. Probably not given the proximity to the edge of the Altar that His Holiness stands, but certainly the particles that scatter North, East and South and points in between.

I heard it said frequently by some “liturgical experts” here in my place that we ought not bother with particles. They say that the Lord, when giving us this heavenly food, knows beforehand that some particles would really get lost along the way of preparation, consecration, and reception.

However, I find it troubling that the same “experts” don’t bother to suggest that the Church in her wisdom has found a way to take care never to lose the Sacred Particles. And all in the name of the great “breaking-of-the-bread-show”, “we-who-are-many-are-broken-and-shared” thingy in the great stress on the community that “celebrates” the “meal and sharing of the Eucharist.” There is this great stress on community and meal which relegates the adoration and reverence we must give to the Divine Presence in the great Sacrament of the Altar. And this somehow leads to a very casual attitude when approaching the Blessed Sacrament; it contributes to the erosion of faith and love that one must have before physically receiving It in our mouths: “No one receives this Bread, without first having adored it” (St. Augustine)

There is a saying that there is no need to reinvent the wheel. The same is also true regarding over-sized hosts and communion on the hand. The Church has already devised a way to avoid the loss of the Divine Particles. We need not reinvent it. And that is the reason why the priest’s host must not be very big. Like you, I once used those over-sized hosts in celebrating Mass; and for the very same reason that you discovered, I have never used them for a very long time now. And it is not being overly scrupulous, Father. It is just doing all the best that we can to honor, to respect, to reverence, and to conserve the great gift that has been given to us in every consecrated particle that the Lord has condescended to make into his Body. If in the process of having done all our best (by not using those over-sized hosts, using communion plates held under the chin, encouraging communion on the tongue) we still would be bothered in our conscience (and would maybe even resort to using magnifying glasses to look for unseen particles!), that is what I would really call scrupulosity.

Yes, the over-emphasis upon the "shared meal/community" bit is kind of back door protestantism...sort of theological social work. Again, we are not at Mass to celebrate ourselves and our "community." We are there to glorify God through participating in Christ's sacrificial gift to us and to stand in awe before both His majesty and His humility. "We who are broken are shared..." yeah, yeah....blah, blah. I hear strains of Peter, Paul, and Mary's "Hymn." Vomit.

What about this meditation: We are mindful that there are things we should strive to do yet we are limited by our natures in what we can accomplish. We are at the same time gifted by God with the knowledge that he can care for all that we cannot. Our duty is only to do all we can and it that be done consciously for the glory of God.

Are you really a "Waldensian?" If so, what on earth are you doing on this blog...lol.