Augusta's Church of the Most Holy Trinity Jardine Pipe Organ. It was built to be sent to Most Holy Trinity by the time of its consecration in 1863, but the northern blockade of the south prevented it from being shipped. It sat on the dock in New York until the Church could raise enough Federal dollars (not Confederate) to have it shipped to the church in 1868. The priest poet of the south, Father Abram Ryan who was the Associate Pastor of the Church of the Most Holy Trinity at the time, gave poetry recitals in Augusta to raise the Federal dollars needed to bring the organ down. It was completely and "historically" restored while I was pastor in the mid 1990's.In the 1980's an "Allen" electronic organ was placed in the choir loft, with its speakers in the Jardine case! YIKES! The now restored Jardine is a jewel of an instrument but somewhat difficult to play compared to today's modern pipe organs. READ MORE ABOUT IT BY PRESSING HERE! 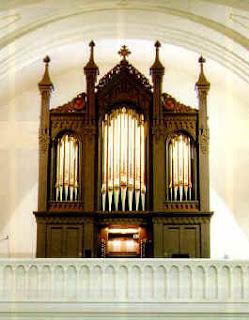 Priest poet of the Confederacy, Father Abram Ryan, Associate Pastor of the Church of the Most Holy Trinity in 1868! 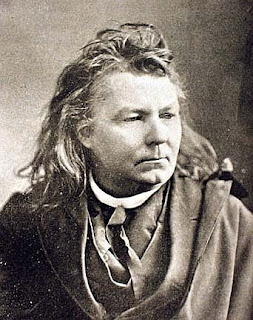 With a renewed emphasis on singing the Mass rather than singing at Mass, what about singing the Creed? What I love about our High Mass in the Extraordinary Form is that we sing everything, including the Credo. I've gotten pretty good at singing along with the schola and I hear many behind me in the congregation doing likewise.

However in the English Mass, we never sing the Creed. I take that back. When I was pastor of the Church of the Most Holy Trinity, the 9:30 AM "High English Mass" did feature the singing of the Creed and every Sunday!

Dr. Janet Hunt, our music director and organist, then a high Episcopalian, who through fate or God's providence led her to be the organist and music director of St. John major Seminary in Boston after I left, taught us to sing the Creed in a plain chant and on only one note. However, she would play the organ as we sang it this way, added all kinds of melodies and curly "Q's," etc. It was quite nice and quite easy. I suspect she brought this to her from her high Episcopal heritage. I don't know for sure.

She has since entered the full communion of the Catholic Church through her association with the seminary in Boston. She has a love for Gregorian Chant, but also would teach our choir at Most Holy Trinity to sing the responsorial psalm in Anglican Chant which I simply love. It's quite beautiful.

How many have experienced the Creed sung in English? What about doing it?
Posted by Fr. Allan J. McDonald at Wednesday, September 01, 2010

I would love us to sing the creed- but I feel we might as well wait and learn with the "new" words. I love the mass being sung!

A question about the dates for Fr. Abram Ryan, who according to

was in Knoxville, Tn during 1865-1867, and only arrived in Augusta in January 1868. In fact, according to a plaque which I haven't actually looked at in several decades, I believe I recall it indicating that Fr. Ryan was at Immaculate Conception, the mother church of Knoxville where I was baptized and confirmed.

Henry, your facts are correct. I've been away from Most Holy Trinity since 2004 and I believe he was there beginning in 1868, because it was that year that the organ was shipped to Augusta. Thanks for the clarification. A point of interest is that there is a monument to Fr. Ryan in downtown Augusta. It is on Greene Street, which is two streets over from Most Holy Trinity. It is in front of St. John United Methodist Church.

Attending Mass in the EF in NYC it has always been one of the most moving moments of Mass when we sing todether the Credo in Latin. I remember being particularly moved last year when the woman in front of me had a Latin/Spanish Missal and myself with an Latin/English Missal began to sing the Credo together in Latin. It was beautiful and a visible sign of unity. I think way to many Priests underestimate the value of this for the simple lay person.

Father Ryan was, and is, the Catholic power house high school in Nashville, TN. As far singing the Mass or any part of it: the metre is tricky and can the people can lose the meaning if the words are so inflected that they are but sounds. There is the chance of chant with the recitation of stanzas of the Creed, e.g. between short musical interludes.