DO YOU THINK POPE BENEDICT'S TRIUMPH IN ENGLAND WILL GALVANIZE THE SECULARISTS WHO FEAR MORE THAN ANYTHING A GALVANIZED CATHOLIC CHURCH? 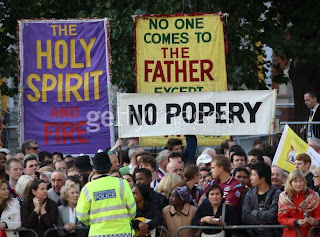 Pope speaking to politicians and other leaders in Westminster Hall where St. Thomas More was condemned to death for his fidelity to the Pope! 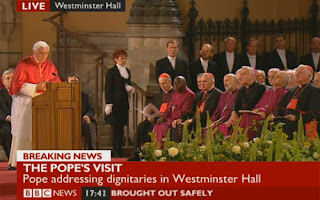 All the fears and anxieties that the pope would be humiliated in Great Britain and possibly arrested proved false. He won them over and never budged once on his message and the need for Christianity in general and Catholicism in particular to be active in the social and political process of that country and all of Europe.

The protests were a side show to the actual "gig" as some called the pope's various venues.

His soft spoken demeanor betrayed the rock solid message that he unflinchingly proclaimed. He took a razor to the rampant secularism of Great Britain and all of Europe and cut it to shreds without once blinking and none of the secularists saw the blood spewing forth from their smug ideological agendas.

But will this galvanize the powerful secular media, those in high politics and sadly enough the Judas Iscariots in the Church who truly hate the Catholic Church's traditional teachings in general and truly hate Pope Benedict in particular because he is such a threat to the secularists' domination of Europe. Stay tuned to the news media, maybe even CNN on Saturday night. Let's see how far they will go in discrediting the Holy Father.
Posted by Fr. Allan J. McDonald at Friday, September 24, 2010

I think the media gets more credit than they deserve. They do have an impact on how the public perceives events, but at the same time, after listening to the Holy Father (especially his address in Westminster Hall), I think that some of the general public may not agree with the media's commentary. I believe one newspaper said something to effect of no one likes to see someone beat up on a nice old grandfather.

As to secularists, having been one myself in the past, I can say that they don't need any outside forces to stick to their positions and shout at the top of their lungs about it. They'll do that without the slightest bit of provocation. Doing it after this visit just makes them look foolish and vindictive.