IS THE SECOND COMING NEAR? 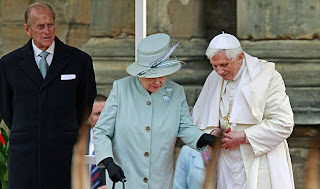 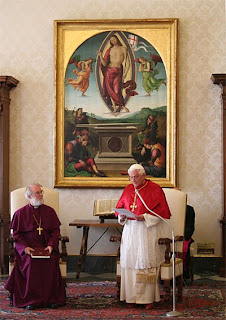 The New York Times actually ran a very positive editorial on Pope Benedict on September 20th. It must mean that the Second Coming has arrived. Get thee to confession! You can read it BY PRESSING HERE for ROSS DOUTHAT'S EDITORIAL!

The editorial shows why so many in the liberal media and in liberal politics are opposed to Pope Benedict. He and his Church are the biggest stumbling block to the agenda to secularize the world through a godless new religion. These secularists are not opposed to religion that is private, quiet and non-influential in the area of politics, morals and ethics. Radical secularists want absolute control over setting policy and law. They'll do anything to neuter or discredit traditional religion, especially Catholicism.

We know what the secularists want to do. It's all about sex: artificial birth control, abortion, condoms, same sex marriage, and polygamy. But it is also about euthanasia, genetic engineering using aborted fetal tissue and it is about assisted suicide.

When the Catholic Church lobbies in a political way for our point of view and galvanizes the millions of Catholics in this country to vote according to a well formed Catholic conscience, this threatens the agenda of the on going secularization of our world. You can see why they hate us.

Pope Benedict gives us an example of how to face our critics and haters. It is the love of Christ and serenity in the face of yet another attempt in the 2000 year history of the Church to snuff out the message of Christ. In a calm but calculated manner the Holy Father faced the world in England and did not blink! That's the example His Holiness gives to us as Catholics!
Posted by Fr. Allan J. McDonald at Tuesday, September 21, 2010

Amen; not only did Pope Benedict XVI not blink, but he rose above the secularist protestors who did blink.

80,000 children cheering; cheers and applause in Westminster Hall and Abbey; the Pope's ministry in England and Scotland have caused many to re-think the propaganda.

Awesome!!! I also saw this posted on EWTN "How do the British view the Pope’s visit? Get the lowdown from EWTN London Correspondent Joanna Bogle’s blog" http://www.ewtn.com/news/blog.asp?blog_ID=4

Would only disagree on one point: they do not want religion that is private, either. It means you are thinking for yourself. They want the over arching state to be god and them the priests. Same sex marriage is the best example. It makes perfect sense that it should be easy to create a legal and binding relationship with someone to share your resources. I considered legally 'adopting' my mother-in-law for that very reason. When she became frail in her last years I could provide for her the same as any other family member and giving her access to the benefits I earn would make that easier. I would consider doing the same for a friend on his last legs. In neither case do I need to associate sex with it.

So much of what the secular society claims is humanistic is really dehumanising. It is merely a form of prostitution to get us into the bed and voting booth.

When you can get 80K attendance for a 6AM Adoration, but you can't get more than 20K protesters in the middle of the day, I'd say the other side "lost".

Like I heard it said best during one of the says coverages "The Pope received an ovation in Westminster Hall!! It's over."

...and the gates of Hell shall not prevail against it...

Even the British tabloids gave the Pope a hearty thumbs up and that's really something.

The mass circulation "News of the World" called him the "Peoples' Pope" and also won the prize for the best headline:

In light of the positive Papal visit, with so little effective protest this story from CNN is an attempt to stir up controversy. The attacks against the Church seem to me to be proof of the strength of the Church.

Hey, if they are going to hate us, let's give them a really good reason! Pope Benedict has a very gently, fatherly, loving manner of speaking the truth. He is not out there stomping the podium. He just needs to look at you with that sweet smile, and there is really nothing that can compete with that. And of course he has the whole Church, and Christ himself behind him. So really, we have nothing to fear.