THE DISCONNECT BETWEEN THE PRIEST AND THE CHOIR IN THE EXTRAORDINARY FORM HIGH MASS: IS IT NECESSARY? 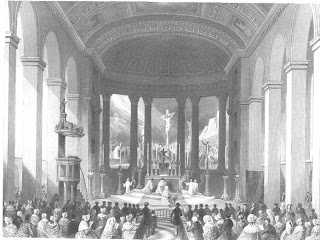 One of the things that I felt unusual as I learned how to celebrate the EF High Mass is that in many places prior to Vatican II, the priest was required always to say all the parts of the Mass even though the choir was also singing them. For example, the Introit, Kyrie, Gloria, Creed, Offertory antiphon, Sanctus, Agnus Dei and Communion Antiphon were always said by the priest even though the choir was singing these also. If the choir parts were long, the priest would sit as well as the congregation while the choir completed their parts. But the priest had already said these! In the revival of the EF Mass, I find that some priests or congregations are still emulating this which I think truly does need reform. There is no reason why it must continue for the High Mass in the Extraordinary Form.

But there is a positive as well as the negative aspect to be considered. The positive aspect of this disconnect from the choir/congregation is that it emphasizes the role of the priest at Mass as precisely that "priest" or mediator between God and Man. Jesus is ultimately that Mediator or High Priest during the celebration of the Mass, the ordained priest only represents this realty in a sacramental way. So what the priest is doing even independent of the choir/congregation is important as it points to or reveals Jesus Christ who is the One Intercessor before our Heavenly Father. We cannot go directly to God the Father except through Jesus Christ! The sacramental priest standing between the laity and God the Father is a sign of Jesus' exclusive High Priesthood who represents us before God the Father.

The negative aspect is that it implies that the laity from whom the ordained priest is called, does not also have a priestly function during the celebration of the Mass, albeit priest and laity have different roles. The laity together with the clergy form the Body of Christ and His Bride. So for the priest to usurp the parts that the priest and laity have in common and use them exclusively as his own prayer seems to be a corruption of his function at the altar and a diminishment of the legitimate priestly function of the laity by virtue of their Baptism and Confirmation at any given Mass.

In fact the first revision of the Mass and its rubrics immediately following Vatican II in the 1965 missal instructs the priest to say or sing together with the congregation and or choir those parts of the Mass that belong to both clergy and laity. This was a most needed and important reform of the Tridentine Mass and there is no reason why it cannot continue with the 1962 missal although the rubrics are not explicit in it as in the 1965.

The only exception I would suggest would be to non-Gregorian chanted Mass which use Mass settings that are more choir or concert pieces. Of course, the use of this type of music would be very rare in any given parish except for some special occasion if the church choir could pull it off or a visiting choir wanted to perform a very difficult concert Mass. Then the priest could do as was commonly done and sit as the choir completed their lenghty pieces.

The other exception is for the Roman Canon after the Sanctus. I can see where it might be advantageous for the priest to say the Sanctus by himself and launch into the canon prior to the choir's completion of the Sanctus. The people in the EF Mass kneel at the Sanctus, not afterward. The canon is prayed silently, a symbolic way of entering the "holy of holies" like the Eastern Rites enter behind the Iconostasis of their sanctuaries. I'm not opposed to a silent canon if it is properly understood as a sign of reverence and the holiness of the Canon.

I really like hearing the choir's drawn out singing and the priest having to "wait". It is much slower and more meditative. Of course, that assumes the choir is a good one and the music isn't terrible!

I like the priest not having to really involve the laity by saying things loudly or with a microphone. This, too me, shows exactly the "disconnect" between the priest and the laity. There's an important distinction that should be emphasized during the Mass. Now, outside of Mass, the priests should be friendly and "down to earth". But, during the Mass, the differences should be highlighted.

At the risk of being accused of Clericalism, I prefer the Priest on the Altar to lead, and for there to be clear and easily distinguished lines between he and the laity. For that reason I am comfortable with it as it is. I readily admit this is preference though.

This is from an acquaintance in NYC:
"Fr. Z is visiting New York, and was celebrant and homilist at a traditional Mass this morning at Holy Innocents Church on West 37th Street. (A beautiful church, btw rcg) A small choir contributed a stunning rendition of a Renaissance Mass setting by Cristóbal de Morales, to which the homilist made reference. Don’t let anyone tell you that music in the liturgy is mere ornamentation, or a distraction, Fr. Z said; it is prayer. Between the Morales parts of the Ordinary and the familiar Gregorian version of the Credo, this service made a strong case for his assertion. (Coincidentally, today’s 8 A.M. Eucharist at St. John the Divine Episcopal Cathedral demonstrated that the exact opposite approach can also be spot-on: It was a simple, moving, and lovely service with absolutely no music at all. One can reach the numinous where people are “making a joyful noise,” but also where there is just the “still small voice.”)"

So the Mass is a form of art, if art is indeed a mortal expression of sensing the divine.

It seems the people in charge of the music ministry should work to select the music not only based on the season, but to reinforce the readings at the least. We surround ourselves with beautiful artifacts inspired and dedicated to the glory of God, why should the music be any less?

In contrast our 8 am mass introduced a new Mystery to the congregation, "What key are we in?" Be not afraid, however, the Bulletin heralded "Fr. Jan
Michael Joncas, Marty Haugen, and Tony Alonso lead us through
reflection on our Eucharistic liturgy and its power for our lives. Through reflection, presentations, and prayer, we will explore and reflect upon how worship can draw upon our rich tradition and at the same time speak powerfully to our contemporary culture. Among the
topics discussed will the expected changes in the new translation of the Third Edition of the Roman Missal." Wow, who would have thought the liturgy would still be relevant?

See: Joseph A. Jungmann, The Mass Of The Roman Rite.

Fr. Jungmann's analysis of the disconect between choir and celebrant is a result of the introduction of the "private" Masses by the Mendicant orders (Dominicans and Franciscans who were not choir monks, nor ordinarily assigned to major churches where the ordinary complement of ministers and schola were available) in the 12th Century. Prior to this point in liturgical history, all Mass were said "in (litugical) choir" with the celebrant only saying/singing those parts that pertained to him (greetings, oration, Canon, etc.) the other parts being assigned to the minister responsible for them (Schola--all music, sub-deacon--Epistle, Deacon--Gospel). The celebrant did not repeat these parts until the mendicant orders made it the practice of saying the Mass privately. This new vogue for private Masses without the necessary ministers for the various parts created the impression and led to the liturgical rubric that the celebrant personally had to say all the words of the Mass in order for the Mass to be both valid and licit. This led to the rather odd situation where in a "Missa Cantata" (the typical High Mass with no deacon or sub-deacon), two Masses are going on simulteously, the "Mass of the Schola," i.e. the Propers and Ordinary of the Mass all of which are being sung by the schola/choir and the "Mass of the Celebrant" who said all the words of the Mass including those already sung the schola.

John, Thanks so much for that succinct history! Fr. McDonald

I am pretty much equally devoted to the ordinary and extraordinary forms -- my gratitude for the impending third anniversary of Summorum Pontificum balanced by my eager anticipation of the forthcoming new English translation.

But I regret the comparative thinness of the OF that I feel results from its one-dimensional or sequential linearity.

While I see as a glory of the EF the multi-layered depth that (I assume) is a consequence of its development under the influence of the Holy Spirit (moving in some of the strange ways described in histories of the liturgy).

Coincidentally, I recall thinking yesterday -- as our schola rendered a very lengthy and elaborate chant of the gradual/tract (psalm) -- that our priest (sitting and listening after himself formally proclaiming it to God) surely appreciated no less than the rest of us the depth and layers of meaning brought out by the intricate Gregorian chant (as is its purpose).

Of course, there is no reason that the OF should be deprived of these chants that are prescribed in the Graduale Romanum for it also. But during the gradual-tract-psalm, the most elaborate and lengthy of all the Gregorian propers, it would look absurd for the celebrant to stand immobile and silent in visual focus for 10 minutes or so, while the choir is chanting away in the loft. Surely no priest could endure this ignominy. Or could you, Fr. McDonald?

I don't think this is as much a problem during the Gloria as it is during the Credo. People who are new to the EF tend to get confused about what they are supposed to do during that time because of the genuflection that takes place during the "et incarnatus est." Do they genuflect with the priest and then sit when he does rather than follow the choir? Do they stay standing until the choir gets to that part and sit after the genuflection? Or do they sit when the priest does and then awkwardly genuflect from a sitting position when the choir gets to that part? I've seen all these at EF Masses.