UNINTENTIONAL SACRILEDGE OF THE MOST HOLY EUCHARIST VIA LARGE CRUMBS!

Do you see the large fragment to the left of the large un-consecrated host--that's a crumb on my black trousers as I was breaking the large host! More about this below! 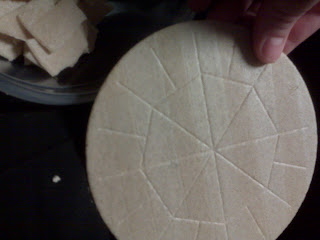 Another picture of crumbs or large fragments from large unconsecrated host I was breaking at the scored part of these hosts! 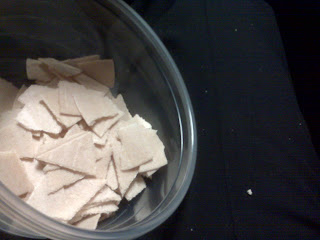 For the past 30 years I have used the large host in the photo above for the Holy Sacrifice of the Mass. But no more! I've become more conscious of the fact that when these are "broken" after the Consecration of the Mass, during the "Breaking of the Bread" that large fragments of the host fly all over the place, on clothes, corporal, floor and elsewhere.

I saw this happen this morning in my office as I sat at my desk chair with a Tupperware container. I was breaking the large breads and realized that against my black trousers and the florescent light, I could see large and small fragments flying everywhere! If I had filmed this in slow motion, it would look like these fragments would become like an aerosol spray or a sneeze from a person's mouth filmed in slow motion. One can't see this during Mass with the white altar cloth background and the lighting of the Church.

I have already made a decision no longer to use the large, whole wheat hosts because I would find large fragments on the corporal after the Breaking of the Bread. But I had no idea to what extent this was happening. On top of that, the broken hosts from the large one have a very jagged edge with large fragments easily falling as these are given to communicants.

I am not a scrupulous person, but I do believe what the Church teaches about transubstantiation and that every fragment of the host no matter how large or small is the Body, Blood, Soul and Divinity of our Risen Lord. Accidents happen with small fragments and certainly our Risen Lord can take care of Himself. However, knowing now from what I have seen, I cannot in good conscience continue using these large hosts.

We are using the Cavanaugh hosts in white bleached wheat and the traditional smaller large host for the priest beginning this Sunday!

I've always wondered about this. I hope you have already seen Fr. Z's comments and kudos to your post on his blog. Your wisdom grows in grace each day, Father!

Good move Father. Now I am just praying for the Holy Father to revoke the indult for Holy Communion in the hand. It's long overdue.

I am perhaps too literal in these things. As a chemist by education I am aware that such minuscule parts are emitted by nearly all fractures. Moister bread would be less likely to do so, but would nonetheless.

The only way I can think to prevent it would be to make sure it is broken over a platen large enough to capture the fragments, that are then wiped up with a piece of host.

Fr. Z has a popular website called, "What Does the prayer really say?"
You can access it: http://wdtprs.com/blog/

Like I have always said, the more I learn about things the more readily apparent it is to me (and should be everyone) how logical and superior the Old Ways of Tradition are superior to what we practice today. Everything had a reason, and everything makes sense when you "rediscover it". That goes for the hows and whys we do things. The Larger sized Hosts of yesterday encountered this problem much less, and the "scatter pattern" was commensurately much smaller, and hopefully, contained within the Corporal.

As for communion in the hand, only a fool could deny that that some particles are transferred to the hands of some communicants at almost every single mass. It is improbable to believe it doesn't happen.

I was slapped down for saying this as a young curate thirteen years ago. Thank God the light is dawning. May you example inspire others to dod likewise.