A DOUBLE STANDARD IN REPORTING? 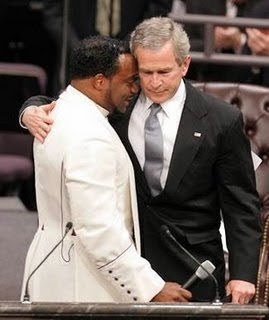 There's a brief article from AP on the Georgia mega church (Baptist) pastor, Bishop Eddie Long who has been accused of sexual abuse by two men, now 20 and 21. They say they were abused when they were 17 and 18. You can read the brief story by pressing this sentence.

This morning as I exercised at the health club, watched CNN and prayed the Holy Rosary to myself (yes, I can multi-task)CNN did a segment on this developing story. The reporter went to great lengths to say that the men allege the abuse happened when they were 17 or 18, but that Georgia State Law says the age of sexual consent is 16! Have you ever heard a reporter declare what the age of sexual consent is in any state where a priest has been accused of similar crime?

More and more we are learning that when a person who has religious authority, such as a bishop, priest or minister,(Catholic, Protestant, Jewish, Orthodox, Muslim, etc) abuses a child or a teenager by taking advantage of them sexually, that this type of abuse has even greater traumatic, psychological consequences for the one abused. One person characterizes this type of religious abuse as "slaying the soul!"

The age of consent issue raised by the CNN reporter does bring another dimension to these sordid scandals. I don't know if it is still true, but within my memory, meaning as a teenager, South Carolina State Law allowed 13 year old girls to marry (they also allowed 16 year olds to drive school buses well into the 1990's!). In fact when I was a teenager one of my supervisors at a fast food joint who at that time was in her late 40's told me she had married at 13 and had her first child at 13 years old. Her husband at the time was 21! Was that sexual abuse? She was pregnant before they married.

Oh, by the way, this pastor is a conservative black pastor opposed to gay marriage and many of the other hot button issues of the day. I wonder if there is any correlation? And shall we accord to him what is not accorded to Catholic priests with allegations of this sort: innocent until proven guilty?" Catholic priests are presumed guilty until proven innocent and even then the doubt lingers! Read about a Glenmary priest in my diocese who was cleared of allegations of sexual abuse in West Virgina. His story is hair raising on many levels, the least of which is how the media in general and SNAP in particular considered him guilty prior to any legal process and continue to make shrill statements after he was cleared. He has been reinstated in his parish in Claxton within our diocese. READ ABOUT HIM HERE.
Posted by Fr. Allan J. McDonald at Wednesday, September 22, 2010

I am not sure it is healthy to dwell on the double standard. It may serve to increase the gulf between the secular world and the Church which would be playing into their hands as well as defeating the mission to bring them to Christ.

Secondly, the issue of the age of consent is perfectly consistent with their view of the world. They believe in abortion on demand and contraception for the same children as are the subject of abuse. So the only reason it is abuse is that the abuser believes in God and is Catholic.

This is not a bad thing at all. It means they at least agree and accept that the clergy are responsible to act to a higher standard, even if the secular world rejects the standard. So, the hard part of the battle is won.

It's similar for teachers- if a teacher is accused, it is very much of a "guilty until proven innocent" and even then, it's hard to get a job and stuff afterwards! I know it's something they warn/teach us about going through education problems.

The media is not as interested when a non-Catholic Clergy is involved in the abuse because other religions pose no threat to the Secular-Humanist agenda. All religions of the World, including large parts of the Catholic Faithful too I'm afraid, have already sold out and jumped on board with the plan to reduce "religion" to meaninglessness.

Catholics are seized upon and targeted precisely because it is the remnants of the True Church, and True Faith, alone who remain standing in the way of a completely unopposed control of the Western World by Secular-Humanists.

In some kind of weird, twisted way, isn't that almost saying more about the standards that are expected of Catholic priests versus ministers of other sects? When a priest is accused, he is jumped on and called out for breaking his vows and abusing the trust of those he serves (not always in those words, of course). And what happens here? "Ah, well, the age of consent being what it is, etc."