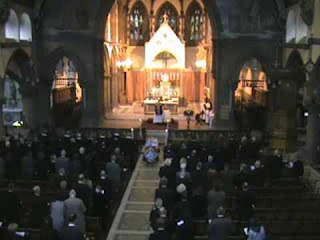 Below is an article by Bishop Thomas Tobin of the Diocese of Providence on the celebration of funerals. He dislikes eulogies and shows that the liturgical norm is opposed to these. In our parish we do allow by request a person to speak after the prayer after Holy Communion. However, our parish norm is that this person must be a Roman Catholic who practices their faith (attends Sunday Mass is the minimal expectation). Their talk must be written and submitted to the priest who celebrates the Mass for review. It can be no longer than 3 to 4 minutes.

For those families who would like additional persons to offer reflections, our parish policy is that the family arrange this and any sort of "celebration of life" that they wish after the "Vigil for the Deceased" has been prayed. This, of course, takes place in the funeral home. This is in addition to but not part of the Vigil for the Deceased. If the family wants someone to speak at the place designated in the Vigil for the deceased, this person must be a practicing Catholic, only one person and the same criteria as for the Funeral Mass.


WITHOUT A DOUBT
Let’s Bury the Eulogies

According to the dictionary, a eulogy is “a speech or piece of writing that praises someone or something highly, typically someone who has just died.” Sounds simple enough, doesn’t it? In the context of a Catholic funeral, however, eulogies can be problematic for several reasons.

The first is that Catholic liturgical norms do not permit a eulogy during the funeral Mass. The Order of Christian Funerals states, “A brief homily based on the readings should always be given at the funeral liturgy, but never any kind of eulogy. The homilist should dwell on God’s compassionate love and on the paschal mystery of the Lord as proclaimed in the Scripture readings.” (#27, #141) The instruction goes on to say that the homily should give consolation and strength to the community mourning the death of one of its members.

The point here is that the funeral liturgy is public worship for the Church – with its own expectations and limitations – and not primarily a memorial service for the one who has died. The homily, therefore, should focus on Jesus Christ and His saving death and resurrection, and not become a testimony – as well-deserved as it might be – to the deceased.

Obviously it’s fitting, even during the homily, to offer sympathy and support to the grieving community, and to say good things about the deceased, to highlight their positive virtues and contributions. But that personal tribute should never be the primary focus of the homily.

Another emphasis of the liturgical norms is that the homily be “brief.” Now, “brief” is a relative term and what might be brief to one might be excessive to another. In light of our common liturgical experience, however, it seems to me that a funeral homily generally shouldn’t exceed ten to fifteen minutes. The homily should apply the Word of God, simply and clearly, to the reality of death and resurrection, and avoid the temptation to recall, year-by-year, the deceased’s life story and accomplishments.

Now, having said all of that, the Church certainly recognizes the more personal consequences of death. For that reason, the funeral liturgy provides an option for the conclusion of Mass: “A member or a friend of the family may speak in remembrance of the deceased before the final commendation begins.” (#170)

Even these “words of remembrance,” popularly called eulogies, create real pastoral problems, however, and like many priests I’ve witnessed abuses of this accommodation. On one occasion, the eulogy was presented by a relative of the deceased, a fallen-away Catholic, who used his time at the microphone to lambaste the Catholic Church and its traditions. In another case, the nephew of the deceased took the occasion to praise his uncle’s rather profligate life style, emphasizing how he was really good “at picking-up chicks.” Another time the eulogy rambled on and on, becoming almost as long as the rest of the funeral Mass.

Sometimes the person chosen to offer the remembrance isn’t adept at public speaking and their words are presented in vain, unable to be heard or understood by the congregation. I remember one eulogist so overwhelmed by grief that she stood at the pulpit weeping uncontrollably for several minutes, imposing her intense private grief upon a very uncomfortable congregation, until someone finally came forward and gently led her back to her pew.

Whether or not to permit words of remembrance is the sole discretion of the pastor who is responsible for the spiritual care of his parish and the liturgy that takes place there. If words of remembrance are permitted they should be very brief, not competing with or replacing the homily, and they should be appropriate in tone, keeping in mind the sacred time and place.

There may be some special situations – for example when the deceased is well-known in the community, or there are unusual circumstances in the death of the individual – when words of remembrance at the end of Mass may be more fitting, but these too must be limited in scope and appropriate in content.

It seems to me that the funeral rites of the Church provide much better times for a personal remembrance of the deceased than during the sacred precincts of the Holy Sacrifice of the Mass – for example, during the vigil, or at the graveside, or at the social event that follows the liturgy when family and friends gather together.

You can see, I hope, why the Church prohibits eulogies during the funeral Mass. They don’t fit well in a liturgical setting, and they are filled with pastoral minefields. The poor parish priest who prohibits eulogies is sometimes viewed as an uncaring, insensitive ogre, while really, all he’s trying to do is follow the law of the Church and provide for a dignified and prayerful funeral.

“In the face of death, the Church confidently proclaims that God has created each person for eternal life and that Jesus, the Son of God, by his death and resurrection, has broken the chains of sin and death that bound humanity . . . Christians celebrate the funeral rites to offer worship, praise and thanksgiving to God for the gift of life which has now been returned to God . . . The Church through its funeral rites commends the dead to God’s merciful love and pleads for the forgiveness of their sins.” (#1, #5, #6)

May all of our funeral celebrations seek to maintain and promote this holy understanding of a death of a Christian.

Agreed. Same for the music at weddings. There are wakes and receptions for the specific desires of people who wish to speak or hear certain tunes.

I've lived in both worlds, and it is more comforting to me to know that my life and death will be enfolded in the worship of the Holy Church and confirmed in the love of Christ through the Holy Eucharist than that somebody will stand up and say a few nice things about me and maybe crack a joke.

I realize that your parish policy is a considerable improvement over the norm for Catholic funerals these days. However -- since the purpose of the funeral is to pray for the repose of the soul of the deceased -- I don't really see a good reason for even the single post-communion exception you allow.

The last funeral I attended in my generally liberal round-church home parish was beautiful, reverent, somber, and exemplary in this regard. No exceptions, no silly hymns. The sermon was about death and salvation, not about the deceases. (Violet vestments, by the way.)

Henry, I would prefer no eulogies by anyone but the current ritual for funerals does allow for it, but each pastor can make additional norms and I guess I could require these not be allowed. But then you have state funerals like Edward Kennedy's were everyone speaks. I don't remember if JFK's funeral which was before any reforms allowed for such, although RFK did have it with Edward speaking.

Father, I don't think a pastor is free to "make additional norms" as you seem to suggest. A pastor could not, for instance, refuse to allow certain biblical passages to be used at funerals, require all attending funerals to go to confession, or other such personal preferences.

He must not attempt to require that which the Church, in her wisdom, does not require.

Very good point, Will. That would lead to many priests becoming "cafeteria" priests, picking and choosing and narrowing where the Church is more generous.

Having attended a non Catholic funeral where the eulogy included stories of abortion and divorce, I can well see the wisdom in the Church's rule!

Rules just help keep things simple. For some reason though, the general feeling is that rules are a burden and deprive us of freedoms. When in reality, they allow us to move freely within an established boundary, free of harm. The more I grow in my faith, the more I am grateful for all those "rules" our wise mother Church has. Darn, if our own earthly moms would banish all rules at home we would live in a tyranny growing up. Mother Church knows best! Thanks Fr. McDonald for educating us on this matter. Even, as you said, it is a very sensitive subject to deal with. And you all (our priests) are the ones that have to enforce these rules, and therefore get the anger face to face. God bless you all!