BACK FROM JACKSONVILLE AND RETREAT

St. Augustine Beach where I spent Thursday! Like Daytona Beach, you can drive your car for a price on the beach and park it there! It's quite nice. Although all I had to do was walk across a sand dune and I was there, that's how close the Condo was to the beach. I could live there! The surf was very rough due to the hurricanes out in the Atlantic, but the weather was great and only in the low 90's! 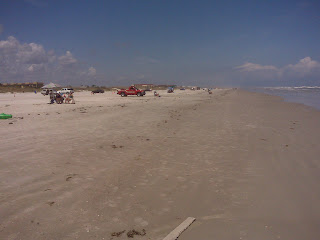 Condominiums and pool at St. Augustine Beach where I spent Thursday night! Just lovely and refreshing too! 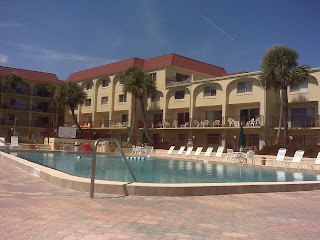 The retreat was very, very refreshing and it was very refreshing not to post any blogs or to make any comments on any other blogs. I spent Thursday afternoon at the Condo of friends from Augusta who are visiting St. Augustine Beach. What a great spot, right on the ocean and a great condo pool as well. The weather was splendid as well. But now it's back to reality.

I did get glimpses of the Holy Father's visit to Great Britain. What courage it must take to do a pilgrimage such as this to hostile territory. God's grace supplies what is needed. Overall I think the English as well as the Anglicans did a wonderful job of welcoming the Holy Father.

I was watching the CBS Evening News on Friday. The only report on the Holy Father was mid way through the newscast. It was just a voice over report saying that six people had been arrested for suspicion of plotting against the Holy Father. Katy Courric then said briefly that as the pope entered Westminster Abby, he was greeted by a female priest of the Anglican Church, the first one he has ever met! Of all that happened yesterday as well as his remarks you would have thought CBS could do better, but they just can't.
Posted by Fr. Allan J. McDonald at Saturday, September 18, 2010

Glad you got to bathe in the beauty of God's creation. I suppose the Couric report was to let you know we had not changed while you were away....