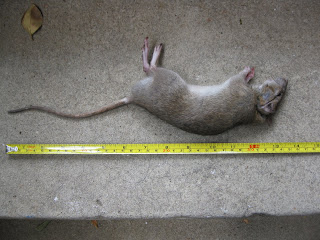 Well, I got access to a computer to update you on the continuing saga of "As the Rat Turns" or if you like, "Another Rat!" I post this as I look out of the window of my hotel overlooking the magnificent Gulf. In fact in the post below, I'm in the high rise hotel that is horseshoe shaped. It is wonderful. But I digress!

When I departed the rectory as we had a missionary priest preach this weekend for Mission Coop Sunday, I told Fr. Justin to call the priest who is from Viet Nam and tell him of our rat problem and that we would put him up in a hotel if he felt uncomfortable staying in our rectory that is hospitable to priests and rats alike. He said he was from Viet Nam and rats don't bother him--he said it not me so don't castigate me--he has a sense of humor too!

At any rate, on Saturday morning, Fr. Justin awoke to go downstairs and at the bottom of the first flight of stairs he noticed a rat trap that wasn't there and he noticed that a rat trap that was under a curio in our bedroom hallway was gone! This is by the bedroom door of our Vietnamese visitor! So he went down and found a dead rat attached to the trap. The rat struggled with the trap around his neck and got all the way down the stairs from the hallway upstairs!

This is rat number five that we've executed and he is a big one!!!!!!!!!!!! This is the stuff of my current nightmares. He was in my bedroom pooping! He could have attacked me in my sleep! He was enjoying himself in our living quarters! He knew hisway around all three floors of our rectory! I saw him alive twice, coming into the kitchen as I was breakfasting! What kind of martyrdom is this? How do I promote vocations under these circumstances?

I pray this is the last one (he ate some decon that we had placed on the third floor two days earlier and he is still around. In fact, he transferred the entire contents of the decon tray from the tray to under a nearby couch for later eating!!!!! And he was still alive and happy! Well, no more!

More to come as information about other wanderings filters into me here in Panama City!

Many thanks to Fr. Pat Foley for bringing his lap top so I can post this. His blog is www.fatherpat'spage.blogspot.com He has pictures of our Ireland excursion!
Posted by Fr. Allan J. McDonald at Monday, September 27, 2010

I am glad Father Justin started adding rulers for scale to the photographs so we can see how truly large these rats are! As your saga continues you both have increased in your documentation skills! I do hope you get resolution to your problem soon. Hopefully before the cool weather sets in!

That reminds me, I need to call my broker to invest in Clorox bleach stock.

Keep up the good work!
I'm a big fan of the old fashioned snap traps, and it looks like this one did the job. I'd get rid of the poison if I were you - as you note, it doesn't work, and it puts harmless wildlife, scavengers, and local dogs and cats at risk.
Your rats are bigger than our rats - ours were about 4-5 inches long, not 6-7 inches!

That's no rat ... that's a bald-tail squirrel. They taste the same as tree squirrels, so I've heard.

You should call this thread "Ratskeller"

They will ingest it, then go to die in the back of your refrigerator..not exactly in the odor of sanctity either!

Was the trap baited with curried beef??????

As you read this bear in mind that I am an Australian and so am unfamiliar with some USA products. When I read "(he ate some decon that we had placed on the third floor", for a nano-second I read "deacon" and had a vision of one of the rats eating a deacon!!lol

Eeek! Now I understand all the hoopla. That's an enormous varmint. I'd sure hate to have one of those critters scratching around my house at night.

Decon is brand of rat poison. But I always refer to my deacons as decons and they know what I mean. I've gotten to the point with these monsters that the decaying smell of one of these would be the sweet smell of success! Fr. McD

That is one impressive varmint.

When I was teaching, a rat wandered into the area behind the heating ducts and died there. My classroom had this awful odor for a couple weeks before the carcass was discovered. You definitely want to keep track of the bodies:-)

Have you ever thought of getting a cat (a really big cat, of course.)

They posted a picture of a dead rat juxtaposed to measuring tape to show how big it was. This blog is cool.

Padre, when I became pastor in June 2002, my rectory was INFESTED with RIVER RATS (size of ferrets). Took me three months but we finally got rid of all of them. Exterminator first tried poison, which they ate like candy and left wrappers behind to spite me. Tried traditional traps which they played with as toys. Finally, I found a high-tech solution: RAT ZAPPER (www.ratzapper.com)

Looks like a plastic shoebox. Uses 4 D batteries and humanely electrocutes the rodents when they crawl into device to consume bait (dry pet food)

We zapped SIX rats. Also found their entry points. One was a rotting terra cotta sewer pipe with a fist size hole we discovered in the basement. Had plumber replace with plastic pipe and buried under ground. Also found several holes in the dirt wall where they tunnelled. Evidently they ate dinner up the street at the trash bin of the local pizza parlor then slept it off at my rectory (Holiday Inn for them). We even found one in the candy machine after he ate a Kit-Kat (no fooling)

I originally thought I had a mouse problem when I discovered chewed openings in my loaf of bread only to see HUGE river rat run through me living room, bed room and kitchen one day. Got a cat when I thought it was just mice then vet warned me to keep him AWAY from rats as they can chew a cat's paw right off (YUK). But now Tiberius keeps the small critters away and the RAT ZAPPER takes care of the big bad boys.

Had months of sleepless nights but now can rest peacefully. For less than what you pay an exterminator for one vist you can get one zapper. I invested in one for each floor.

You could put saddles on those things.

Yours is the second testimonial I've read on the Rat Zapper.

Our rats are tiny compared to yours, but I think I'll buy a Rat Zapper just to make SURE we got them all . . . thanks for the tip!

P.S. Got your Catholicism for Dummies when we converted. Love it.

Have visited your blog in the past. Thanks to Father Z, you are now on my favorites list.

A couple of years ago a rat took up residency in our home. His visit lasted eight days.

On the evening of the 7th day I saw him crawl up the metal frame of our mirrored closet door. I stayed up the rest of the night and at about 5:30 AM, he finally said good bye to this world.

If he had insisted on staying any longer, I would have checked myself out of our house until he met his eternal reward.

Seeing him crawl up the mirroed door really freaked me out. Oh, and the rat trap did him in.

"As the Rat Turns" hopefully soon to be canceled; to never return in syndication! However, it has been a great hilarious show in deed! Your posts and comments could not have been funnier. Although we responded to you in jest, as we laughed so hard we cried as we read! We were always ever so mindful of yours and Fr Justin's plight! May the Rats be gone, we now pray tonight is the night! :-)