THIS IS THE LAST STRAW; I CAN'T TAKE IT ANYMORE! 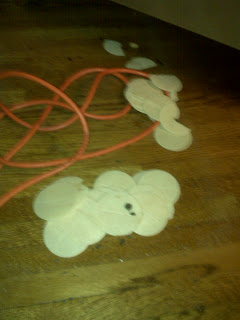 What you are seeing is a stash of large "priest's" hosts that I had on the bottom shelf of a bookcase in my office. Yesterday, I noticed that there was an empty box in the plastic bag I had. I could have sworn that there were unconsecrated hosts in this box, tied in a smaller plastic bag. I didn't think anymore about it.

Then this morning, I noticed about five hosts protruding out from under the tiny opening of the book case as it sits on the floor. All of them had been munched on by our rectory rat, that elusive (explicative eliminated) rat that is haunting me and causing much psychological stress and trauma around here!

Well, I moved the bookcase away from against the wall and the rat had brought all of the hosts underneath the bookcase and was having a feast. He marked his food by putting his droppings all over them as you can see in the picture! It is truly disgusting and this bookcase is behind me as I sit at my desk in my office!

We have tried everything to get rid of this rat and he is so smart that he avoids everything that our professional has placed in the house to catch or kill him.

I know many have counseled against rat poison, but I'm at that point and it goes out tomorrow. We think it is only one rat out of five that remains. I kid you not about the stress that this causes, and that I sleep lightly thinking that the rat could come into my bedroom and I want to be awake when it does. I wouldn't wish this on my worse enemy!
Posted by Fr. Allan J. McDonald at Wednesday, September 08, 2010

Is this, perhaps, a devout rat seeking spiritual sustenance in a wrong-headed fashion...nah...

D-Con, or something like it, is probably the only thing that will get this critter. My Dad raised chickens,and I learned to shoot killing rats in the chicken yard with my .22. Some are very clever and persistant.

This is so "Old Testament". You were offered a cat, but ignored and fled, Jonah-like.

Now you are in the belly of the beast. The rat tests you.

In regards to the use of Posion:

Obviously he's a Cathar Rat and you should feel no regret.

Saint Gertrude of Nivelles is supposed to be the patron saint of those who fear mice. She is also invoked against mice & rats. Apparently gold and silver mice would be left at her shrine in Germany.


I will say a prayer to her for her help with this rat!

WOW this is horrible...it is time to find somewhere else to live:

Rat Diseases: The most famous case of zoonotic disease in human history is the Bubonic plague, or “Black Death” of the Middle Ages. This disease is still present today in the US, though far less common. Over 30 different types of disease are associated with rats and their droppings. They include Rat-bite fever (Streptobacillus moniliformis bacteria), which is transferred from rats to humans by the bite of a rat. Rickettsia virus can create a condition similar to chicken pox. Hantavirus is outlined below. Eosinophilic Meningitis is an infection of the brain, and caused by rat lung worm angiostrongylus cantonensis. The droppings of rats can cause Leptospirosis or Salmonellosis.

Good grief people find a healthy place for the Clergy to live!

Father,
I think this is a possesed rat whose demon seeks to desecrate the Eucharist but can't get to the consecrated hosts. Perhaps this rat will be with you for awhile to harass you like "the Grapin" did with St. John Vianney. Maybe an excorcism on your rectory is in order?

Father,
I believe that this problem you are inuring is so big, that Yahoo News actually picked it up this morning! They too are concerned that rats are hazardous to your health!
See item #3 in the following article: http://shine.yahoo.com/channel/life/10-hidden-hazards-in-your-home-2341861/ !

Love the suggestion to get a cat and name him Rat-Zinger.

A cat will not only control the rat, but also be a means of calming you after a day of stress. Cats are independent and many of them quite loving, even helpful when one is trying to pray the Liturgy of the Hours. They rarely need ministerial support, just a bowl of tuna and water will do.

We had a dear priest many years ago who had a "sacristy cat". He not only kept the parish free of rodents but would also come to the sacristy to guard the priest while he vested; waited there patiently for the Mass to end then followed him back to the rectory for breakfast together. Everyone in the parish loved "Catty Chism" and when he passed at the venerable age of 20 years, the parishioners threw a wake for him.

If you get a cat, just make sure it is not a white one, or else you will be carrying white fur all over your black pants and priestly vestments. That would not be good.

This may be 'out of the box,' but many years ago I worked at a pharmacy in Florida, and we had a similar problem which we inadvertently (but hilariously) solved. The rat found our inventory of laxative suppositories and for a couple of nights had quite a feast. After the second or third day of throwing out chewed-up suppositories, we found a 'trail' which I will leave to the imagination and no further problems with rats. Maybe you could leave some chocolate Exlax lying around the bookcase...

If the rat dies behind the walls you won't be able to stand the smell and will have to move out for a while. Do not get a cat. Cats are for mice. For rat's you need a terrier.