The old Creed in English says that Jesus became Man at this point! That's heretical and leads people to think some strange things about humans in the womb! 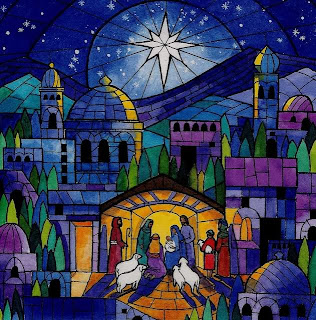 If Jesus did not become Man at the Incarnation, just what was Jesus? What are we if we are not completely human at our conception? Opens the door to abortion for many, if we're not human before we're born! 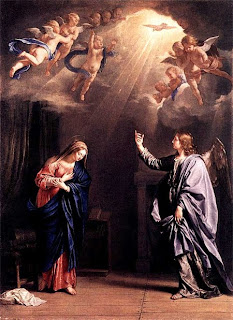 Art Linkletter had this famous saying concerning kids he interviews on his daily and nightly show called "House Party."

Well, today it happened to me as I was teaching our 6th graders about the changes that will occur in our English Mass. We were going over the Creed. We said the old together and then the new. Then I highlighted some of the major changes, such as each of us saying "I believe" rather than "We believe" and "visible and invisible" rather than "seen and unseen". They understood something could be quite visible and unseen because of it being hidden behind a rock or whatever, whereas visible and invisible means exactly that, you can't see it, period!

We got to "consubstantial" and they understood it for what it is worth and that the only time we would ever use this word is in context of the "nature" of Jesus (God the Son) to the nature of God the Father. Of course, we could say that we are one in being with our parents, our twin if we had one, or with our brothers and sisters. But only Jesus, God the Son is consubstantial with the Father, no one or nothing else is that way except God the Father and God the Son. They got it!

But here's where a 6th grade girl said the "darndist" thing. We went over the old Creed where it says that Jesus was "born of the Blessed Virgin Mary and became Man" and the new which says, "and by the Holy Spirit was incarnate of the Virgin Mary and became Man." I explained that Jesus did not become Man or Human at His birth, but 9 months earlier when He was conceived when the Angel Gabriel announced the the Blessed Virgin Mary that she would conceive a Son and call Him Emmanuel. The old Creed is radically wrong, even heretical in having us say Jesus became Man at His birth. That's a lie! It was nine months earlier at the INCARNATION!

The 6th grade girl then raised her hand and stated, you mean that we're completely human before we are born? Is that why abortion is wrong? She gets it! Maybe praying the Creed wrong for over 40 years has led many people to believe we don't become human until we are born, if Jesus became Man at His birth! The way you pray is the way you believe!

When my wife became pregnant for the first time we were elated. we were spending lots of time planning and preparing for the big event. Then one day she came home and told me that she was not feeling right and later that day, miscarried. I cannot bear the memory of the look on her face when we went to the hospital. The doctor could see how distressed we were and offered the comfort that, "There was nothing there but a mass of cells". I know exactly what he meant as I have a degree in biochemistry with several courses in comparative anatomy and embryology. Later, in church, Monsignor Dwyer approached us with the usual greeting that included inquiring about our pregnancy. When we told him he was visibly shaken, turned and went to the rail and knelt in prayer, then stood and went to gain his vestments.

There are times when we feel our own souls and, somehow, the presence of the other souls that surround us. My wife, the soul that was to be our child, the priest, and the ancient line of spirits that is our Church became more real to me than the flesh on my on bones.

If, due to my mortal limits, I must turn a child back into the Darkness would I rather her be armed with love and joy or fear and resentment? I hope to feel that tiny soul again and the singularity of peace it gave me so long ago.

RCG, God bless you. I wish everyone in the world could read your post. You have said it as well as it can be said...and it was from your heart. Thanks be to the Lord Jesus Christ! Amen.

Keep the kid quotes coming! I love them! It is encouraging to know how good the education is they are receiving at St. Joseph Catholic School. And I am glad they are catching on so quickly so they can help the rest of us in the pews on Sunday when that time comes!

RCG,
You're a walking talking testament to the mutual need and compatibility of Faith and Reason.

The belief in Souls is hard for some people to grasp, so they don't bother trying. How sad for us all.

How do we influence the mindset of someone who merely sees it as a 'clump of cells'?

I ask this question sincerely, not rhetorically.

I've a request...do you remember or know where you got the stained glass nativity photo? I've used it myself and am now trying to track down the copyright owner. If so, please contact me.