WOULD THE HOLY FATHER'S WAY OF CELEBRATING THE MASS LEAD TO MORE AWE AND REVERENCE IN THE ORDINARY FORM OF THE ENGLISH MASS? 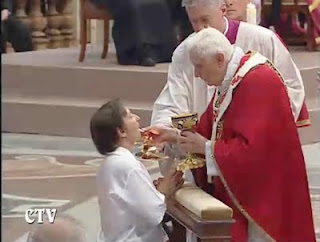 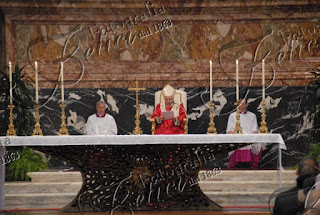 In the blog below where Cardinal Ratzinger responds to criticism about his approach to the Liturgy and his outreach to traditionalist Catholics, I pick two things that I think are still a part of Pope Benedict's hermeneutic of "reform of the reform within continuity."

...liturgical reform, the way it has been implemented, and the crisis deriving from some of the tendencies hidden in it, such as desacralization.

I repeat that which was said in my speech: the difference between the Missal of 1962 and the Mass faithfully celebrated according to the Missal of Paul VI is much smaller than the difference between the various, so-called ”creative” applications of the Missal of Paul VI. In this situation, the presence of the earlier Missal may become a bulwark against the numerous alterations of the liturgy and thus act as a support of the authentic reform.--Cardinal Ratzinger, February 1999

1. Fewer options make for better celebrations. The OF currently has too many options especially as it regards Mass with music and Mass without music. Each priest, music minister or worship committee decides what is appropriate. The EF Mass has three choices, Low Mass (that could have hymns sung at the procession, offertory, communion and recessional, but nothing else); Sung Mass which has everything being Sung that is prescribed and Solemn Sung which would also include the use of deacon and sub deacon and more choreography for the altar boys, extra candles, etc.

2. The singing or saying of the Introit, Offertory Antiphon and Communion Antiphon, these are required in the EF Mass but optional in the OF Mass in the sense that metrical hymns can be substituted. This was an unfortunate development as it regards the General Instruction of the Roman Missal of 1970 and 2002.

3. Kneeling for Holy Communion and receiving on the tongue in the EF Mass has shown me that the return to these simple two gestures by the entire Latin Rite would have the most impact on promoting more reverence and respect for Holy Communion, especially children. There is a tendency today in the OF Mass to make the moment of receiving Holy Communion an "eat and run" experience as well as a "grab and walk off" moment rather than a more measured, slower and reverent moment of receiving. The Holy Father models this in all of his Masses, in fact requires it. Will he mandate that the American norm of standing and the option of receiving in the hand be made option and kneeling the norm as well as Holy Communion on the tongue. I think the Holy Father could legislate this return to a much longer tradition in the Latin Rite.

I am all for the reception of Holy Communion while kneeling.

I wonder though, as many churches have either removed the Communion Rail or have been built without them, do you have a proposal for reception of kneeling while receiving HolyCommunion in these churches?

Also, do you think that a mandate from the Holy Father that Holy Communion is to be received on the tongue while kneeling would open the door for descent and abuse in more "progressive" parishes?

I think you are correct, that we would have to allow the option to stand for those who wanted it, although the norm would be to kneel, just as priests now in the USA should allow someone to kneel if they wish, although the norm now is to stand. Fr. AJM

I'm a bit confused on the issue of receiving Holy Communion on the tongue.
I was next to an EMC from Father's parish who clearly exclaimed after Mass to a friend how her hands were dirty because those people 'receive on the tongue and lick my fingers' and how she wished people wouldn't choose that method of receiving.

Now, how am I supposed to focus on the Lord if I happen to receive Him from am EMC? I want to receive Him on the tongue so that no particles make a pit stop on my germy fingers, but now I know the EMC might be perturbed by it.
I was stunned and dumbfounded by what I heard, only 2 weeks ago.

Are they not trained in technique and theology?
Or am I wrong?
Should she have known better?
According to the tone of this blog, one would expect an EMC of Father's parish to be happy if more parishioners are receiving on the tongue.

Will someone kindly clarify this issue? What I heard was very disturbing and confusing.

Yes, EMC are trained and know that a person has a choice to receive in the hand or on the tongue. However, I must say that when one receives on the tongue while standing and if they don't keep still or place their tongue forward, it is easy to get a lick. However, I find it difficult not to touch the hand of a person to whom I give Holy Communion, try as I may not to touch the hand. Hands supposedly have more germs than tongues. When one is kneeling and still, it is much easier to place the host on the tongue without touching the tongue. While kneeling too, it is more difficult to receive in the hand.
One way for the EMC not to touch tongues is to turn the wrist and place the host on the tongue with the thumb under the host and the first two fingers on top.

Dear EMC, So, don't put your fingers in your mouth until you wash your hands after Mass...I guess it is still all about "me" for this EMC. I wish that EMC nonsense would just go away.

To answer the question, Would the Holy Father's way of celebrating Mass lead to more awe and reverence...? I answer a YES. It seems to me that many at Mass today would benefit from the ritual that used to accompany our worship. I think we desperately need the outward signs that pointed to meaning that is lost today. I miss the kneeling that used to be part of Mass, not just for communion but during the consecration as well. Kneeling never failed to focus my heart, mind, and soul and point the way to the cross and the reason for our presence at Mass each Sunday. My family and I worship in a church without a communion rail, but we do have unused kneelers in the pews. I notice at least one Mass-goer each Sunday who kneels through the consecration in the midst of those who stand. Many of those worshiping around the kneeler I'm sure have no idea what that worshiper's choice to kneel at that particular time means. I miss genuflecting. I miss repeating the Kyrie three times. I miss missalettes, and bells. I think we have lost the awe-inspiring signs that formed the reverence which is so critical to develping a deep bond with the Eucharist. That being said, I'm not sure I want the priests to face away from the congregation. While I love Latin Masses, I think some English Masses are appropriate - and some Masses in Espanol would be appropriate as well. Nonetheless, I support making changes to bring back the reverence.