In my post below this one, I recommended that bishops follow Pope Benedict's lead in reorienting the manner in which the priest faces the altar during the Mass. This morning Pope Benedict in celebrating Mass in the Pauline Chapel for the Pontifical Biblical Commission did it again. This tells the world bishops that this orientation of the priest at Mass is not divisive or disadvantageous but true renewal. Below the picture, read Pope Benedict's remarks on the scandal swirling around His Holiness! Long Live the Pope! 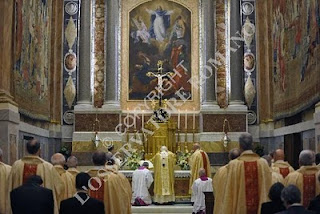 From "Whispers in the Loggia" blog:
In an extemporaneous homily delivered at a Mass this morning for the Pontifical Biblical Commission, B16 made his first comments on the sex-abuse tempest that's shaken the global church over recent weeks.

The full text of pontiff's off-the-cuff reflection to the Vatican's top body of Scripture scholars still to emerge, two early briefs have appeared....

[T]he Holy Father said that in modern times we have seen theorized an idea of man according to which human being would be, “free, autonomous, and nothing else.”

This supposed freedom from everything, including freedom from the duty of obedience to God, “Is a lie,” said Pope Benedict, a falsehood regarding the basic structure of human being – about the way women and men are made to be, “because,” he continued, “human being does not exist on its own, nor does it exist for itself.”

The Pope said it is a political and practical falsehood, as well, because cooperation and sharing of freedoms is a necessary part of social life – and if God does not exist – if He is not a point of reference really accessible to human being, then only prevailing opinion remains and it becomes the final arbiter of all things.

Citing the Nazi and Communist regimes of the 20th century as examples, Pope Benedict said such dictatorships can never accept the notion of a God who is above ideological power – and he also stressed that in the present, there are subtle forms of dictatorship like that of a radical conformism, which can lead to subtle and not-so subtle aggression toward the Church.

The Holy Father also stressed that for Christians, true obedience to God depends on our truly knowing Him, and he warned against the danger of using “obedience to God” as a pretext for following our own desires.

“We have,” he said, “a certain fear of speaking about eternal life.”

“We talk of things that are useful to the world,” continued Pope Benedict, “we show that Christianity can help make the world a better place, but we do not dare say that the end of the world and the goal of Christianity is eternal life – and that the criteria of life in this world come from the goal – this we dare not say.”

We must rather have the courage, the joy, the great hope that there is eternal life, that eternal life is real life and that from this real life comes the light that illuminates this world as well.

The Pope noted that, when we look at things this way, penitence is a grace – even though of late we have sought to avoid this word, too.

Now, under the attacks of the world, which speak to us of our sins, we see that to be able to do penance is a grace – and we see how necessary it is to do penance, that is, to recognize what is wrong in our lives: to recognize one’s sin, to open oneself to forgiveness, to prepare for pardon, to allow oneself to be transformed.

The pain of penance, the pain of purification and transformation – this pain is grace, because it is renewal – it is the work of the Divine Mercy.

Pope Benedict concluded his homily with a prayer that our lives might become true life, eternal life, love and truth.

...and a first-post and full report from Catholic News Service:

Recognizing the sins of priests who have sexually abused children, performing penance and asking for forgiveness, the Catholic Church trusts that God will purify and transform the church, Pope Benedict XVI said.

"I must say that we Christians, even in recent times, have often avoided the word 'penance,' which seemed too harsh to us. Now, under the attacks of the world that speaks to us of our sins, we see that being able to do penance is a grace," the pope said April 15 in a homily during a Mass with members of the Pontifical Biblical Commission.

For the record, this morning's comment came two years to the day after Benedict made his first-ever statement on the scandals during a press conference aboard the Papal Plane to Washington for his six-day US tour -- a week which, alongside numerous references to the Stateside church's crisis, included an unprecedented meeting with victim-survivors.

The pontiff marks his 83rd birthday tomorrow, and Monday sees the fifth anniversary of his election to Peter's chair.
Posted by Fr. Allan J. McDonald at Thursday, April 15, 2010

Wow. Just Wow. This makes me want to cry. I can't wait to see our Bishop's response.

Pray for the Holy Father and his Church. He is doing so much to help us recover our identity and move forwards with the way things are suppposed to be. Not how a Priest or Bishop, or even the laity would like them. Pray for a long Pontificate so he may help us stabilize the gains in recovery. No other future Pope during our lifetimes may be so devoted to the Liturgy. Please support him.

It sounds right on!
God is necessary for us to exist and we don't exist for ourselves.
Penance and Eternal Life.
Nowadays it does indeed take courage to utter these things.