ON HIS FIFTH ANNIVERSARY, THE PERFECT STORM AGAINST POPE BENEDICT AND HIS REFORM OF THE REFORM

WHAT DO ALL THE IMAGES BELOW HAVE IN COMMON? THESE ARE THE FORCES AT WORK AGAINST THE TRUE CHURCH OF GOD AND GOD'S APPOINTED LEADER OF THE CHURCH, POPE BENEDICT THE XVI. IT'S TIME TO TAKE A STAND AND SUPPORT OUR CHURCH AND THE AGENDA OF THE REFORM OF POPE BENEDICT XVI AND TO CALL CATHOLICS WHO ARE COMPLICIT IN THE CONSPIRACY TO TAKE DOWN POPE BENEDICT AND THE TRUE CHURCH OF VATICAN II (NOT THE SPIRIT OF VATICAN II CHURCH, AS THE ANTI POPE, HANS KUNG ELOQUENTLY DESCRIBES IN THE POST BELOW THIS ONE). POPE BENEDICT KNOWS WHAT HE IS DOING. MAY THE POPE HAVE MANY MORE YEARS TO OVERTURN THE "SPIRIT OF VATICAN II ANTI-CHURCH" AND STAND UP TO THE LIBERAL FORCES IN THE WORLD THAT SEEK TO CONTROL THE CHURCH, THE POPE AND ALL CATHOLICS--THE DICTATORSHIP OF LIBERALISM--POLITICAL, SECULAR AND RELIGIOUS!

This lawyer, Jeff Anderson has been at the core of old documents given to the New York Times and AP, both news outlets that have not been forthright in reporting to the public that this lawyer's intent is to "sue the s--t" out of the Catholic Church. He has made millions over lawsuits in this country. He is at the core of the recent media blitz and false reporting concerning two major cases of priest abuse from 30 to 50 years ago. I think this man may well be described as an "anti-Christ." He wants to interrogate Pope Benedict in court and sue the s--t out of the Vatican to make hundreds of millions for himself and bankrupt the universal Church. 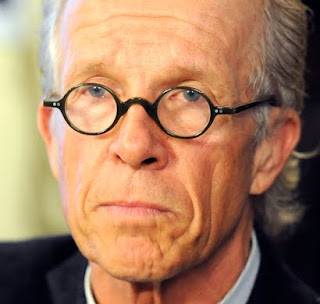 Today's standards applied to clergy sex abuse of the 1970's and bishops' actions well over 50 years ago! 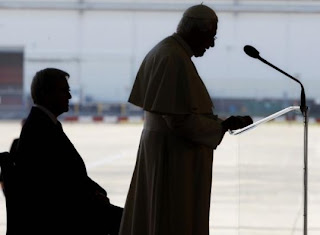 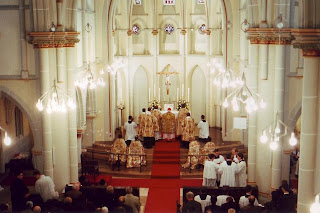 Pope Benedict allowing disaffected Anglicans, clergy and laity to come into full communion of the Catholic Church with their Anglican Customs and traditions, including married priests 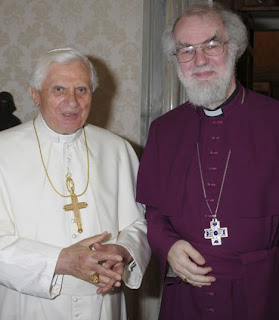 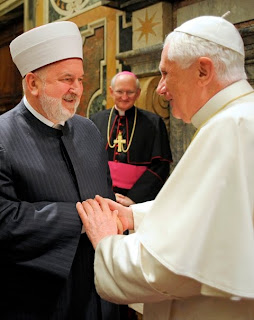 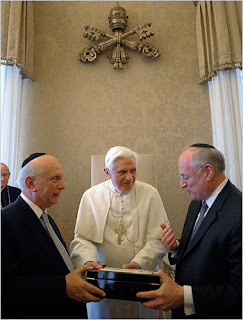 The pope has no authority to authorize women deacons, priests or bishops, he is also investigating religious orders of women as he has done so for men and seminaries, he is pro-life, against artificial birth control, the use of condoms, etc--all highly charged, polarizing issues in the world and the Church 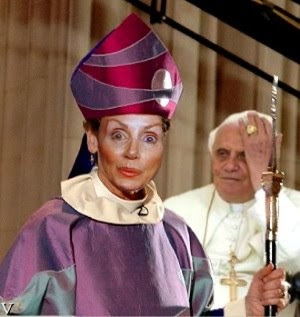 The pope emphasizes that the Catholic Church understands marriage as a divine institution between one man and one woman for a lifetime. This flies in the face of proponents of gay marriage and the gay lobby is outraged against any Church that stands in their way, in particular the Catholic Church and her pope. 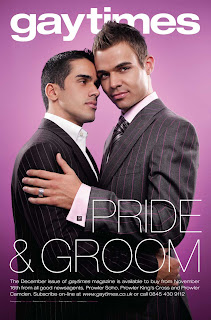 The perfect storm against Pope Benedict and the Catholic Church has been created by left wing liberal forces in our lawyer generated litigious society, world politics, the media and sadly in our own Church. Jeff Anderson a lawyer in Minnesota desires to bring down the Catholic Church financially as a result of the sex abuse scandal. The Pope is accused of covering up every sex abuse case since the 1960's, fifty years ago and forward.

Liberal Anglicans are outraged that the Pope has saw fit to invite disaffected conservative, traditional Anglicans and their pastors to join the full communion of the Catholic Church. Pope Benedict has the audacity to teach what the Catholic Church believes, that the Catholic Church is the One True Church and Protestant denominations are not true Churches, but "communions separated from the true Church which is the Catholic Church and the Orthodox Churches." As well, the Holy Father has no authority to ordain women, will not relax the Church's teaching on artificial birth control and is concerned about some orders of Women Religious who have chosen a path of self-destruction of their orders for the sake of liberalism, political and religious. The Holy Father is opposed to radical feminism in the Church that is built not on Church teaching but secularism.

Tied into radical feminism is the radical gay lobby and their political agenda to redefine marriage. The Holy Father is a symbol of oppression and repression to them as is the Catholic Church. There are strong forces in the main stream media that will do anything to bring down this pope and the Church to help the radical gay agenda move forward unimpeded.

Pope Benedict has the audacity to allow the Tridentine Mass without restrictions, angering liberal hippie theologians, bishops, priests and laity (mostly aging ones, the Pope's contemporaries) who absolutely despise him and his leadership in seeking the reform of the reform and the ousting of the "Spirit of Vatican II" ideology that as so infected the Church since the drunken euphoria of the 1960's. In other words, Pope Benedict wants all Catholics to worship the true God, not the false god that so many have turned the "spirit of Vatican II anti-Church" into. These same liberal forces in the Church are seeking revenge on Pope Benedict who as Cardinal Ratzinger put many of their heroes on trial and stripped them of their teaching credentials!

Pope Benedict challenges extremism in Islam and its violent approach to the world and its own members which then causes violent outrage over his words thus proving the Holy Father's well made point.

The pope desires to canonize Pope Pius XII who is bitterly maligned by some Jews and the main stream media. The pope tries to heal schism in the Church by reaching out to a schismatic sect in the Church which has an "anti-Semitic" bishop and the press and some in the Jewish community spew forth contempt toward the pope for doing so and try to even paint Pope Benedict as "anti-Semitic."

THIS ARTICLE IN THE NEW YORK TIMES IS ACTUALLY FAIR AND BALANCED BUT INADVERTENTLY CONFIRMS MY EDITORIALIZING ABOVE. NOTE ESPECIALLY THE PARAGRAPH I HAVE MADE IN BOLD PRINT:

VATICAN CITY — Buffeted by a sexual abuse scandal that is quickly defining his papacy, Pope Benedict XVI marked the fifth anniversary of his election on Monday by telling a group of cardinals that he did not feel alone at the head of what he called a “wounded and sinner” church.
Related

His remarks seemed yet another small and indirect reference to the growing sexual abuse scandal, which has focused more directly on whether Benedict, before he became pope, and his subordinates acted strongly enough against pedophile priests. Under increasing pressure to address the issue more forcefully, Benedict spoke a day after meeting with abuse victims during a short pilgrimage to Malta.

At the anniversary lunch here on Monday, he told 46 cardinals that he “very strongly feels that he is not alone; that he has on his side the entire college of cardinals, sharing with him tribulations and consolations,” according to a front-page article that afternoon in L’Osservatore Romano, the Vatican newspaper.

He did not directly bring up the crisis, the paper said, but thanked the cardinals for their help at a time when the church seemed to press forward “amid the persecutions of the world and the consolations of God.”

When Benedict succeeded Pope John Paul II five years ago, many Vatican experts predicted that Benedict, a bookish scholar with a strong theological bent, would not inspire the same sort of public adoration as his predecessor. But few could have predicted that his papacy would be characterized by a series of controversies that have alienated Muslims, Jews, Anglicans and even many Roman Catholics.

“This has been a papacy of cyclical crises,” said Marco Politi, a journalist who covers the Vatican, citing a series of missteps: the citation of a disparaging comment about Islam in a 2006 lecture that angered Muslims; support for the canonization of the controversial pope during World War II, Pius XII; and the 2009 attempt to rehabilitate a Holocaust-denying bishop.

“The issue is that Benedict is a great thinker and theologian and preacher, but he doesn’t have the temperament of a religious political leader,” Mr. Politi said. He added that the Vatican curia had been of little help to the pope.

Benedict’s greatest challenge, however, may be to deal with the sexual abuse scandal that has rocked the church in recent weeks, with cases mushrooming in the United States and Europe, including the pope’s native Germany. Benedict returned Sunday from Malta, where he met and prayed with abuse victims, as he has several times in the past in addressing sexual scandals around the world generally.

Speaking after Monday’s lunch, Cardinal Angelo Sodano, dean of the college of cardinals, thanked the pope for leading the church “with great generosity.” The college of cardinals “is a large family, ever united with the successor to Peter,” in particular in the face of “the challenges that the modern world poses to each disciple of Christ,” Cardinal Sodano said in his speech, published in L’Osservatore Romano.

My final comment: Some would say the pope should not be so polarizing and simply get with the times and allow the Catholic Church to be like the Anglican Communion and then there wouldn't be such the polarization that he has caused. But I ask you, wasn't Jesus Christ just as polarizing in His day and in the Church as He now lives in the Holy Spirit, dividing people just as He did in His public ministry?

(Matthew 10:34) - "Do not think that I came to bring peace on the earth; I did not come to bring peace, but a sword. 35"For I came to set a man against his father, and a daughter against her mother, and a daughter-in-law against her mother-in-law; 36and a man’s enemies will be the members of his household."
(Luke 12:51) - "Do you suppose that I came to grant peace on earth? I tell you, no, but rather division; 52for from now on five members in one household will be divided, three against two, and two against three..."
Posted by Fr. Allan J. McDonald at Tuesday, April 20, 2010

Well done Father. A great tribute to our strong Holy Father who is leading the One True Church through the maze of MSM attacks. The Church will grow ever stronger because of priests, (like you!) clergy and laity who stand behind the pope and the teachings of the Catholic Church. Strong examples of not bowing to the forces that impose there own destructive agenda to weaken the Church. Thank you for all you do. "Viva il Papa!"

“The issue is that Benedict is a great thinker and theologian and preacher, but he doesn’t have the temperament of a religious political leader,” Mr. Politi said. Actually Mr. Politi, that's why we like him. The Church is experiencing a cleansing process right now. I'm not depressed, in fact I'm happy. I appreciate you defending the Pope Father, but the crisis was in the 70 and 80's, not the 2010's. It's great to be alive and be Roman Catholic right now!

Thanks you, Father, for this article and all the others you've written (including the one in the current issue "Sacred Music"). When I get depressed because of the slow progress of liturgical reform (especially in my home parish), I can look to your blog to lift my spirits and reinvigorate my efforts. Pray for us who struggle against authority which does not recognize the crisis the Church has undergone and continues to undergo; authority which turn a deaf ear to requests aimed at restoring sacredness and mystery to the Mass through, among other things, the rudimentary use of Latin and chant. Again, thank you for your efforts.