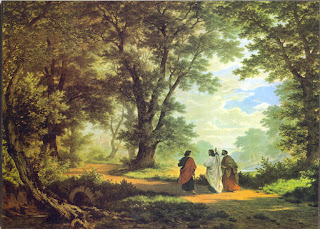 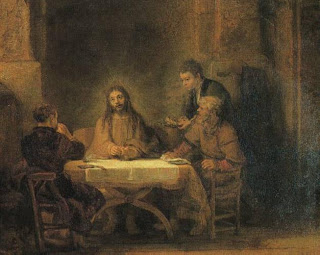 As I prepare my homily for this Sunday, the Third Sunday of Easter, year C, I came across a homily I gave at the Church of the Most Holy Trinity in Augusta on the Third Sunday of Easter, year A, 2002, shortly after the sex abuse scandal was revealed in Boston and erupted into an international media feeding frenzy. The Gospel for year A is Jesus on the Road to Emmaus. For what it is worth to you today:

Introduction: When the media obsession began concerning the scandal of priests sexually abusing children, I have to tell you that my first knee jerk reaction was, “this really makes us priests look bad; certainly it’s only a minority that are doing this. Yes the church made mistakes of judgment, we’re only human.” But more recently, I’ve been reflecting on the plight of the victims. What must it be like to be a child who is sexually abused by a priest? What must it be like to be the parents of a child so horribly exploited? Empathizing with the victims, rather than empathizing with the priests gives a whole new perspective.

In the spectacle of this scandalous drama that has been unfolding in the media, one scene captures a lost opportunity by Cardinal Law of Boston to empathize with the victims of this torrid scandal. At a Sunday Mass in which the Cardinal was celebrant, a purported victim of sexual abuse by a priest walked up the aisle and stood before the Cardinal who was preaching from the pulpit and demanded accountability. The cardinal stood there stunned and silent until security ushered the man away. It was yet one more tragic missed opportunity for the cardinal. What a sermon it would have been if the cardinal simply walked down from the ivory tower of the pulpit and embraced this victim. The true presence of Jesus, body, blood, soul and divinity may well have been present in this young man. The reverence the Cardinal holds for the real presence of Christ in the Eucharist must be extended to the real presence of Christ in all of us, especially the truly victimized. It was another in a long line of lost opportunities.

Topic Statement: Jesus Christ, the ultimate Victim, empathizes and embodies all who are wounded by injustice, abuse, crime, betrayal and every other sin imaginable.

1. As the ultimate victim, Jesus grants forgiveness and remission of sins to all those who abuse Him by their sins, that’s all of us, my brothers and sisters.

A. There’s a true story about a man who was terribly abused by his mother as he was growing up. She was an unfit mother who emotionally and physically abused her son when he was a child and continued to do so when he became an adult. As you can imagine, the scars of childhood generated anger and rage against his mother, a burden he carried for many years. It was not until some time after his mother’s death, that this man began to empathize with his mother and tried to understand her pathology. In doing so this moved him to forgive her in death. He states that at the moment of granting this forgiveness a great weight was lifted from his shoulders and he felt liberation from his years of abuse that he had never felt before.

B. On the road to Emmaus, two followers of Jesus encounter the risen Lord. But they do not recognize him. Perhaps the glorified body of the risen Lord resembles ordinary humanity victimized by sin and death. Could Jesus have resembled the woman caught in adultery? Could Jesus resemble the prodigal son or the prodigal father? Could Jesus have resembled the woman at the well? Could the risen Lord have resembled a beggar, an orphan, a widow or any other despised person of the day? Even as the risen Lord taught these two disciples about the things of God, they failed to recognize him? It is not until a meal that very much captures the essence of the Holy Eucharist that the disciples recognize the victim once slain but stands before them in glory. The Holy Eucharist that reenacts the sacrifice of forgiveness of the cross and the victim slain because of our sins is the venue where followers of Jesus recognize Jesus the Victim through faith and then go to the world to proclaim his message of love and forgiveness as well as penance for the remission of sin.

Conclusion: Catholics are at the crossroad of a monumental tragedy and at the same time at a moment of profound grace. Will we empathize with the victims of sin and will we empathize with the ultimate Victim of Sins, Jesus Christ and the forgiveness He offers as the way to eternal life? Will we recognize Jesus the Victim in this Holy Eucharist and at every Mass? And recognizing Him, just how well will we follow Him? Will we imitate his forgiveness, love and reconciliation?
Posted by Fr. Allan J. McDonald at Friday, April 16, 2010

Sounds 100% appropriate still.
Who says one can't repeat a homily?