Subsidiarity at work, doing your own thing regardless of what Rome says. With new and more rigid laws in place from Rome to help stem the tide of sex abuse by minors, will bishops follow the pope's lead or continue with business as usual, mismanagement and abuse in all kinds of areas of the Church's sacred trust? 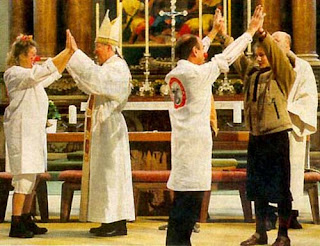 Since becoming Pope, Pope Benedict has met with victims of clergy sexual abuse in the United States, in Australia and now in Malta. Each time he listened to their story and apologized for the pain and suffering inflicted upon them. He has taken serious steps to address this issue worldwide even though progressive Catholics desire subsidiarity rather than Roman rule from the top down. Subsidiarity in many ways has led to a mentality to let the lowest level take care of the problem. Even Cardinal Ratzinger when he was the Archbishop of Munich in the late 70's early 80's may have well bought into the principal of subsidiarity by allowing a person below him to handle disciplinary action toward priests. Also, the common practice of sending priests for psychological counseling and then placing them back into ministry was the mindset throughout the world at this time of euphoria in the Church, that rehabilitation and healing could be sought for just about any human ailment, spiritual, moral, physical and psychological! The Vatican II Church was very optimistic, naively so! At any rate, subsidiarity doesn't seem to have worked very well and now we need micro management of bishops to make sure priests who abuse are not recycled. With new church laws in place Bishops in the future who fail in their responsibilities should face sanctions. With top down clear laws with canonical sanctions and with bottom up obedience to what the Pope is mandating, perhaps we can calm the waters, help victims heal and rebuild the great discipline and trust of the Church. What applies here to stemming sex abuse of minors should also apply to every other important ministry of the Church especially her liturgy. It's time for the bottom up of the Church to obey what Pope Benedict is asking as it concerns the Liturgy, Summorum Pontificum and following the General Instruction of the Roman Missal. If the "Reform of the Reform" was thought not to be needed, let all skeptics cease and desist! We need the "hermeneutic of continuity" with the best of our past not "rupture" in who we are as Catholics!

FROM THE NATIONAL CATHOLIC REPORTER

Valletta, Malta -- One of the eight victims of sexual abuse who met Pope Benedict XVI today in Malta described the encounter as "very emotional," saying most of those present were crying, and even the pope had "tears in his eyes."

"I made peace with the church," said Joseph Magro, one of the victims who met the pope.

Magro has been among the most outspoken of ten Maltese men who recently came forward to say they were abused by Catholic priests at a church-run orphanage in the 1980s and 1990s. The revelations shocked this tiny island nation, in part because another of the victims linked his abuse in the orphanage to a horrific murder he committed in 1991, in which he killed a homosexual man with a hammer and then cut his body into pieces with a broken bottle.

Another victim who met the pope, who asked to be described as "Immanuel," said that the victims "will continue the fight for justice," and insisted that they do not want money from the Catholic church.

This was Pope Benedict's third meeting with victims, after previous encounters in the United States in April 2008 and Australia later that same year.

In a briefing today for reporters, the Vatican spokesperson, Fr. Federico Lombardi, described the meeting as "intense" but "serene." The eight victims in the meeting were all male, he said.

Lombardi said the session took place in the chapel of the residence of the papal nuncio, or ambassador, in Malta. It began with a moment of silent prayer, and then Benedict moved near the altar to meet the victims one-by-one, allowing them to say "whatever they wished to say," Lombardi said.

The pope also responded to the victims individually, in either English or Italian, Lombardi said, but did not offer any general remarks.

The meeting concluded with a common prayer in Maltese, and the pope gave each victim a rosary.

The victims were accompanied by two local Maltese bishops, while the pope was joined by a senior Vatican official, his private secretary, and his nuncio in Malta.

On previous occasions when victims have met the pope, their first-blush reactions are generally positive, but over time some have argued that the promise of those meetings has not yet resulted in sufficient policy changes.

Recently two of the victims who met Pope Benedict in Washington in 2008 announced plans to bring a large delegation of victims to Rome in late October. They're calling the event a "Day of Reform, and intend to press the Vatican to embrace a new set of tough global policies on sexual abuse.

The Vatican also issued a formal written statement after today's meeting. It reads:

"On Sunday 18 April 2010, in the Apostolic Nunciature in Malta, the Holy Father met a small group of persons who were sexually abused by members of the clergy."

"He was deeply moved by their stories and expressed his shame and sorrow over what victims and their families have suffered. He prayed with them and assured them that the Church is doing, and will continue to do, all in its power to investigate allegations, to bring to justice those responsible for abuse and to implement effective measures designed to safeguard young people in the future."

"In the spirit of his recent Letter to the Catholics of Ireland, he prayed that all the victims of abuse would experience healing and reconciliation, enabling them to move forward with renewed hope."

While the victims who took part in the meeting seemed generally hopeful about its significance, the largest organization for victims of priestly sex abuse in the United States was more skeptical.

“We are sure these brave men deserve anything that can help their healing and we hope they feel better,” said Barbara Dorris of the Survivors’ Network of those Abused by Priests

“However, the Pope's professions of ‘sorrow’ don't keep one child molesting cleric away from kids, expose one corrupt bishop or make one child more secure,” Dorris said. “That is where the Pope’s focus should be.”
Posted by Fr. Allan J. McDonald at Sunday, April 18, 2010