NOBLE CELEBRATIONS OF THE MASS AND NOBLE CATHOLIC LIVES, THE TWO GO TOGETHER, YOU KNOW!

This past Saturday, Bishop Slattery of Tulsa celebrated the Extraordinary Form of the Mass at the Basilica of the National Shrine of the Immaculate Conception. I was not able to see it, but many told me that the nearly three hour Mass was absolutely splendid as was the bishop's homily. One parishioner told me that since our parish has been celebrating the EF Mass, that it has helped her to appreciate and understand the OF Mass much better. She said that never in a million years would she have watched a three hour Mass on TV until she had her faith and understanding of the Mass strengthened here by our EF Masses. I have to say that the same is true for me as a priest. Celebrating the EF Mass has strengthened my faith and understanding of the Mass and affected the way I celebrate the OF Mass. What the Holy Father wanted in allowing two forms of the one Roman Rite has taken place in those who celebrate both forms, both clergy and laity, here in little old Macon, Georgia!

At the same time, the Mass is meant to propel the clergy and laity to live their Catholic lives in an ethical manner showing concern the needy and forming strong Catholic families and households. We are called to be pro-life in all of its aspects, to be politically engaged to bring the morals and ethics of our faith to the market place and to serve the needs of the poor, the dispossessed and disenfranchised. We are called to work with the widow, the orphan and the alien. Does your experience of the Mass in whatever form lead you to a radical Catholic life, or do you remain lukewarm or even cold and indifferent to the ethical demands of our faith?

Many people say that the EF Mass is too triumphalistic, complicated and opposed to what the Second Vatican Council envisioned for the Mass. Look at the five images below, two from the EF Mass in Washington this past Saturday and one from the recent Hollywood production of a Mass in Los Angeles and the other one from God only knows where. Which of these do you think is more "catholic" with a little and capital "c"?

You can't see Him, but Bishop Slattery is wearing the Cappa Magna, the red garment with the really long train. Now compare this procession with the video below and tell me which one is more dignified, less triumphalistic and in keeping with our long and venerable tradition in liturgy? Just tell me! 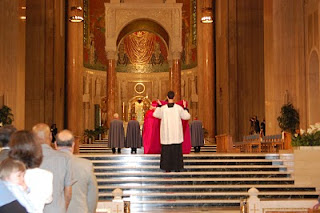 The High Altar of the Shrine, now seldom or ever used, a moveable altar closer to the congregation is now used for the OF Mass. I'm glad to see the "true" altar used and the movable one moved, hopefully to Alaska. There is absolutely no reason why the altar above is not the ordinary altar for the Ordinary Mass at this Shrine. It is a shame that it is not used! 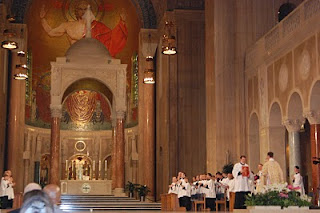 Now compare this procession to the one below it, both are stunning in different ways!

Now, how about this procession! Is it noble simplicity, there's no cappa magna! So it must be! This procession is so much nicer than the one at the Shrine! NOT!!!!!


I guess you could call this "creative introductory rites" for the Mass, but at least the clowns aren't sitting on the floor surrounding the bishop like in that dreadful EF Mass! So nice! NOT!!!!!! 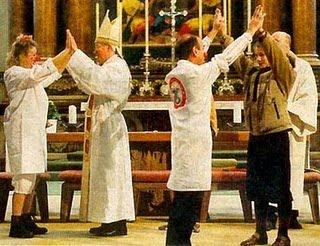 An finally, an email I received from a former parishioner now living near Washington, DC. He attended the Mass in Washington this past Saturday. It's nice to be affirmed now and then! Thanks Gregg!

I attended my first Latin mass when you instituted pope Benedict's "motu proprio" at St Joseph. It changed my whole way of thinking about the mass and what we do there. As you say, it's not about the priest or the laity, it's about Christ and how we worship and respond to him. I think the Latin mass gives space for deep prayer and reverence to those seeking more traditional catholic worship. We should give praise for our tradition, after all it is one of the "pillars" of our faith. Thank you for all you do and continue to do to bring us closer to our Lord. I'm realizing how deep and rich our catholic faith is and how it includes all who seek the Lord.
As I left the basilica yesterday, I pictured the scene in Mel Gibson's "The Passion of the Christ" where the Devil is cringing after our Lord defeated sin for us. The entrance (magna cappa) by the Bishop was magnificent and awe-inspiring. And his homily was brilliant, strengthening and guidance for us all in this time of turmoil. I like how he stated "we have much to talk about", getting right to point. Following the order of the traditional Latin mass, orients us to Christ first by simple logistics then by humbling ourselves through deep prayer and giving thanks for the everlasting sacrifice he made for us and in my opinion, reverence in a deeper way that cuts to the core of our secular world. I think the pope knows what he's doing.
By now father, you probably know "I FOLLOW YOUR BLOG." I think it's fantastic and very informative. I love seeing and hearing about the on goings at beautiful St. Joseph. I hope I don't pester you to much with my comments, but I just can't help myself sometimes. You give me so much hope it spills out and I really do miss you all. I know I haven't done a very good job of staying in touch, but circumstances have changed with my job that I might be back in the middle Georgia area, hopefully! Well I had to write and let you know what a great day I had yesterday and what you've meant in the journey. Hope to see you soon.

I ran across quite a bit of "flack" being thrown at this version of the Holy Mass. I felt the need to share. Here are some highlights:

"I must be honest in saying that I find this rite offensive by todays’s liturgical standards. It isn’t just the endless bows, nods and genuflections, nor even the silly dancing birettas."

"[T]his Tridentine liturgy was an elaborate ritual manifestation of ecclesiastical rank, not a Mass in conformity with the fundamental Vatican II mandate for full, active participation by the faithful."

"I hardly see how frippery of this magnitude glorifies God, who has no need of such things. In fact, when sackcloth should be the defining couture, silk is a stumbling block and an obstacle to the proclamation of the gospel. If anything, the sex abuse crisis is a call to a renewed humility."


Reading all this about Vatican II led me to consider SACROSANCTUM CONCILIUM. Father, maybe you could show us in there where it says the liturgy is about the people and not about giving glory to God? Yes, people should be fully engaged in the liturgy. According to SACROSANCTUM CONCILIUM, we should respond to various acclamations. However, isn't out most important role during the liturgy our disposition, our prayer?

Like many, I'm sure, I didn't embrace the Tridentine Mass at first. Now, however, if I could, I would only attend Tridentine Masses because only in those Masses do I feel like I am participating. Even though I say nothing and don't speak Latin, I pray infinitely more during the Latin Mass. Why? Because I don't have to be worried about when I have to speak next. There's not a lot of distracting English being thrown about. There aren't people doing strange hand gestures, inappropriate to the laity. There is silence, reverence, prayer, and contemplation. Yes, in the Latin Mass, there is glory and contemplation of God.

This is secular humanism speaking. It is all about the exaltation of man and the mythic ideal of an egalitarian society. The stuff is garbage...devoid of grace, absent of dignity, debasing to God and those in attendance. They are literally too stupid to realize what they are doing, and I am including the Bishops and Priests who sanction it.

Oh, and by the way, of all the many adjectives or descriptions of the Holy Mass in the Tridentine form, one of the very least likely to pop into my theologically educated mind is "triumphalistic." Where do these people come from? Who in all the long history of God's people and His Church would ever see triumphalism in the Sacrifice...that's sacrifice...of the Mass? I don't get it. What am I missing?