HAS THE LOSS OF CATHOLIC IDENTITY CAUSED THE CATHOLIC LAITY TO BECOME PASSIVE IN THE FACE OF ANTI-CATHOLICISM? 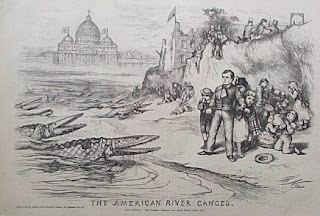 The article below was in Canada's National Post. I think it hits the nail on the head. Our Catholic identity in the past 45 years has been so eroded, that many Catholics cannot distinguish between the culture they have accepted and the implicit and explicit anti-Catholicism that pervades today's culture. They cannot distinguish between legitimate news stories that might paint our Church leaders and priests in a bad light and the anti-Catholicism that fuels the hatred for the Church's moral stands on abortion, on homosexual marriage, on women priests, on health care that provides government funded abortions, on sex outside of marriage, on birth control, on the use of condoms and on "end of life" issues. Our anti-Catholic culture, politics and media want to undercut and eliminate any influence our Church leaders might have on the political order and swaying votes one way or another and on judicial processes especially within the Supreme Court. Why can't the rank and file laity and some clergy not see the anti-Catholicism that surrounds them and yes influences them to passively accept it?

I had confidently believed that only long-term residents of cuckooland took seriously the recent proposal of Christopher Hitchens and Richard Dawkins to arrest Pope Benedict XVI and to put him on trial for crimes against humanity when he visits England this fall to beatify John Henry Newman; but now I am less sure.

The event that gives me pause is the release this past weekend of a British Foreign Office document called The Ideal Visit Would See…; this document, drawn up in anticipation of the Pontiff’s visit, suggested that the Pope might be encouraged to open an abortion clinic, bless a gay marriage and launch a new brand of “Benedict Condoms.” This emanated, don’t forget, from the British Foreign Office.

True enough, as soon as it became public, Foreign Minister David Milibrand said he was “appalled,” and he promised that the author would be transferred to another department. An official statement issued Sunday said: “The Foreign Office very much regrets this incident and is deeply sorry for the offence it has caused.” But the document had already been in circulation, both at Whitehall and Downing Street; it is difficult to avoid the conclusion that official condemnation occurred not because of what is in the document but because it inconveniently became public in the midst of a general election.

This is another of many recent examples of Catholic-bashing — the last acceptable liberal prejudice. Liberals, who will tie themselves in linguistic knots to conform to the dictates of political correctness, think nothing of vilifying the Catholic Church, its teaching, its Pope and hierarchy. Of course, thanks to the sex abuse scandals, the Church has presented a large target lately. But Catholic-bashing was a common phenomenon before the recent scandals.

On an HBO television show called Dennis Miller Live, the host concluded one opening monologue with the words: “F--- the priests; they’re weird.” Is it conceivable that this man would ever say: “F--- the rabbis (still less, “the Imams”); they’re weird”? If he did, they would be his last words over the public airwaves.

But Catholic-bashing, prima facie, is acceptable. It is remarkable how the same people who cannot bring themselves to call suicide bombers “terrorists,” for fear of giving offence to Islam, consistently exhibit a level of vitriol toward Catholicism that would make an Orangeman blush. A comedian named Bill Maher made a career out of doing that.

Writing in Catholic World, George Neumayr got it right: “The moral authority of these Church-hating ideologues is nil. We are witnessing the repulsively absurd spectacle of a culture drenched in depravity lecturing the Vicar of Christ on moral responsibility. One doesn’t even have to agree with every action or inaction of Benedict’s ecclesiastical career to see that these attacks on him have been appallingly stupid, glib and Pharisaical.”

Why do Catholics, by and large, put up with this?

There are several explanations, some hopeful, others less so.

First, the Church takes the long view. She is of ancient and divine origin and, as such, has survived worse than the jibes of potty-mouthed adolescents. The Church that saw off Attila the Hun is not inclined to tremble before Bill Maher.

Second, for several generations now, North American Catholics have sought to minimize their differences, to meld into mainstream society. Catholics do not want to be perceived as a minority; so don’t rock the boat. It is often easier to go along with the prevailing anti-Catholic message than to challenge it.

But perhaps the most accurate explanation for Catholic passivity is more sinister, namely that many Catholics have come to accept the premises of the very people who hold their faith in contempt. Perhaps, instead of taking their cues from Pope Benedict, these Catholics take their cues from the depraved celebrity culture in which we live. Perhaps what Catholic children learn in the separate schools is the same postmodern, relativist and materialist bilge that is taught in the public schools. Perhaps Catholics don’t react because, at least at the subconscious level, they have absorbed the premises of modern liberalism.

If this is true, then the Church faces a great challenge.

Ian Hunter is professor emeritus in the Faculty of Law at the University of Western Ontario.

One antidote to passively accepting the Anti-Catholicism of our time:

In my younger days I considered myself a Catholic on Sundays (when I wasn't lapsed) and an American all the time. Now I would say I see the world differently. I have less faith in the institutions of man and greater faith in Holy Mother Church. I am a Catholic first, last and always and in all things. The fact that I am an American also is incidental to me. I participate in American politics and society because my Catholic Faith considers my doing so to be right and just, but in all those interactions it is my faith that guides me and not my nationality.

While not disagreeing with any of the suggested reasons why the faithful may tolerate the bias, I offer another reason which is the Catholic belief that we are to "take up our cross". I do defend the Faith when it is attacked in my presence, but I try not to be too sensitive to the uncharitable behavior of others, preferring instead to believe all such abuse is part of God's plan to use these things to produce a greater good.

Looks (from the people) like this was the midnight Mass of Christmas, and (from the candles) a Novus Ordo Mass celebrated versus populum at the high altar under the baldacchino. Right?

Templar, I share TOTALLY your view of yourself as a Catholic first and an American incidentally also.

I used to be one of those people who believed the garbage spewed out by the liberal media. Thank goodness God pulled me back to the Church.

Godless secularism has indeed permeated all levels of society, and Catholics have fallen for many of those ideas and don't even realize that they have.