JOHN ALLEN AND THE NATIONAL CATHOLIC REPORTER, ANOTHER GOOD AND INSIGHTFUL ARTICLE. HIS ARE THE BEST!

Below is John Allen's article from "All things Catholic" hot off the press. It is very insightful. It is long, but I've highlighted a couple of paragraphs concerning the mentality amongst bishops as it regards their priests and how this contributed and contributes to the scandal. On one hand I see the wisdom in confidentiality between bishops and priests and when that confidentiality is breached, the relationship between bishops and their priests are breached. The Church is not just a place of employment implementing the rules of corporations in regards to management and employees, it is a community of faith and a family. So in this whole scandal, I hope the Church will stand up for who we are and at the same time place policies and procedures that protect not only the bishop/priest relationship but more importantly protect children and minors from those who are morally and psychologically twisted. 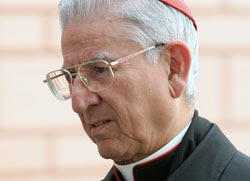 Cardinal Darío Castrillón Hoyos must feel trapped in a "Twilight Zone" episode, in which, in a flash, the whole course of his life has turned out differently. Now 80, not long ago Castrillón was a consummate Roman powerbroker, a man admired for the nerves of steel that once allowed him to stand up to drug kingpin Pablo Escobar. Novelist Gabriel Garcia Marquez at one point hailed his fellow Colombian as "this rustic man, with the profile of an eagle."

Today, even if he weren't almost 81, Castrillón would have about as much chance of becoming pope as Sinead O'Connor. As the then-president of a Vatican commission that deals with traditionalist Catholics, he took the blame for the Holocaust-denying bishop fiasco in January 2009. Now Castrillón has achieved global infamy in light of a September 2001 letter he dispatched to a French bishop congratulating him for refusing to report an abuser priest to the police.

Though the letter was actually published on the Internet in 2001, it languished in relative obscurity until a French Catholic publication brought it back to life a couple of weeks ago. Given the current media climate, it immediately became a cause célèbre. Outrage has made Castrillón such a lightning rod that he was forced to back out of a Mass tomorrow at the Basilica of the National Shrine of the Immaculate Conception in Washington, D.C., over what organizers described as concerns for "tranquility and good order."

By way of background, Castrillón's letter was addressed to Bishop Pierre Pican of Bayeux-Lisieux, France, sentenced by a French court to three months in prison in 2001, though that term was suspended, for failing to denounce Fr. René Bissey, convicted in October 2000 for sexual abuse of eleven minor boys between 1989 and 1996.

"I rejoice to have a colleague in the episcopate that, in the eyes of history and all the other bishops of the world, preferred prison rather than denouncing one of his sons and priests," Castrillón wrote.

A stampede for distance

Over the last two weeks, the rush among church leaders to distance themselves from Castrillón has turned into a mini-stampede.

First up was the Vatican itself. In a rare case of "rapid response," the official Vatican spokesperson, Jesuit Fr. Federico Lombardi, had a statement out to reporters almost immediately after stories broke in France.

The letter, Lombardi's statement said, offers "another confirmation of how timely was the unification of the treatment of cases of sexual abuse of minors on the part of members of the clergy under the competence of the Congregation for the Doctrine of the Faith."

In effect, that was a polite way of saying that Castrillón was part of the problem against which then-Cardinal Joseph Ratzinger, now Pope Benedict XVI, had to struggle in streamlining Vatican procedures for dealing with sex abuse cases.

After Castrillón's appearance in Washington became a bone of controversy, Archbishop Donald Wuerl likewise put space between himself and the Colombian cardinal. Through a spokesperson, Wuerl let it be known that he would not attend Saturday's Mass due to a scheduling conflict. There was no statement of support for Castrillón, no complaint about unfair media coverage.

Wuerl's spokesperson also said that as a cardinal, Castrillón enjoys "universal faculties" -- an indirect way of saying that he didn't need, or ask, Wuerl's permission to show up.

Yesterday, Sr. Mary Ann Walsh, director of media relations for the U.S. bishops' conference, posted a blog item bluntly saying that Castrillón's 2001 letter illustrates a "disconnect" between the American bishops and one Vatican congregation [presumably, she meant the Congregation for Clergy], as well as possibly inside the Vatican itself. Walsh went on to argue that there is no "wiggle room" in the American sex abuse norms when it comes to cooperation with civil authorities, and that counts for a lot more than a "buck-up letter" from Castrillón to a French bishop.

Needless to say, public talk of a "disconnect" between the American bishops and Rome, or inside the Vatican, is not the usual fare from an official spokesperson for the U.S. bishops.

Bottom line: At least as far as the Vatican and the American bishops are concerned, Castrillón is on his own.

On April 16, Castrillón spoke at a conference on the legacy of John Paul II at a Catholic university in Murcia, Spain, in which he asserted that he had shown his 2001 letter to the late pope who authorized him to send it. Far from being a previously secret "smoking gun," Castrillón said that he had posted the letter at the time on the Web site of the Congregation for Clergy.

According to media accounts, Castrillón draw warm applause from the audience, which included a couple of senior Vatican cardinals.

Given how far and fast many Catholic leaders are running away from Castrillón, it's tempting to conclude that he's a sort of rogue cardinal speaking only for himself. In truth, there's an element in his letter that does reflect a broader climate of opinion at senior levels in the church, even if there's also widespread embarrassment over how Castrillón expressed it.

In a nutshell, there is still considerable ambivalence about the idea of bishops turning their own priests over to the police.

For one thing, Castrillón asserted in Spain that he was congratulating Pican for defending the seal of the confessional. That's a bit murky, given that Pican has given somewhat conflicting accounts of how he learned of Bissey's crimes, especially how direct the connection was to the sacrament. (Under French law, confessional secrets are protected under a category of "professional secrets," though the law makes an exception for crimes committed against children.)

If the issue is truly whether bishops should be willing to go to jail rather than betray the seal of the confessional, then Castrillón would hardly be alone in suggesting that the answer is "yes."

Yet the 2001 letter seems to make a broader argument, which is that putting bishops in the position of reporting priests disrupts the family bond a bishop is supposed to have with his clergy. Traditional Catholic theology teaches that a bishop is both a "brother" to his priests, meaning a fellow member of the clergy, and a "father."

The objection to "mandatory reporting" requirements is therefore that just as a son should be able to share something in confidence with his father, a priest shouldn't have to worry that if he bears his soul to his bishop, the bishop's next phone call will be to the cops.

Some of that ambivalence came through in a recent interview with Monsignor Charles Scicluna, the Vatican's top prosecutor on sex abuse cases, in the newspaper of the Italian bishops. Scicluna said the Vatican's policy is that in countries where bishops are required by civil law to report abuse themselves, they should comply.

"That's a very grave matter," Scicluna nonetheless said, "because these bishops are being forced to take a step comparable to a parent who denounces his or her own child."

Where bishops are not required by law to make a report, Scicluna said, they should encourage the victims to make the report -- the idea being that the police need to know what happened, but the bishop should also protect a zone of confidentiality with his priests.

Beyond that concern, prelates such as Castrillón are also old enough to remember what happened in regimes hostile to the church -- whether police states of Latin America, or Communist governments in Eastern Europe -- where clergy were encouraged to inform on one another in order to weaken the church from within, and where refusal to do so was considered a mark of heroic virtue. (Bishops from former Soviet states and from Latin America have sometimes warned against an uncritical embrace of "mandatory reporter" requirements for exactly that reason -- it's a sort of Anglo-Saxon delusion, they say, to believe one can always trust the police and the courts.)

To be sure, even bishops inclined to share those concerns would hardly extol Castrillón's letter -- especially because there's no word of compassion in it for the victims of the French priest, and no condemnation of the broader phenomenon of sexual abuse within the church.

Still, the letter points to an important insight about where things stand in the church with regard to the crisis: By now, there's wide consensus that crimes by a priest should be reported to the police, but how and by whom remains contentious.

Finally, a footnote about the impact of the Castrillón episode: Ironically, resurrecting that 2001 letter may have doomed Castrillón, but it could actually help Pope Benedict XVI.

Throughout the most recent round of media coverage, there's been a serious mismatch between Pope Benedict's actual record on sex abuse -- as the senior Vatican official who took the crisis most seriously since 2001, and who led the charge for reform -- and outsider images of the pope as part of the problem.

While there are many reasons for that, a core factor is that the Vatican had the last ten years to tell the story of "Ratzinger the Reformer" to the world, and they essentially dropped the ball. That failure left a PR vacuum in which a handful of cases from the pope's past, where his own role was actually marginal, have come to define his profile.

One has to ask, why didn't the Vatican tell Ratzinger's story?

At least part of the answer, I suspect, is because to make Ratzinger look good, they'd have to make others look bad -- including, of course, Castrillón, as well as other top Vatican officials. Lurking behind that concern is a deeper one, which is that to salvage the reputation of Benedict XVI it might be necessary to tarnish that of Pope John Paul II.

In this case, however, Castrillón has inadvertently licensed the Vatican and church officials around the world to use him as a foil, effectively waiving a cardinal's traditional immunity from criticism.

From here on out, when spokespersons insist that Pope Benedict fought inside the Vatican for reform, the world will have a much clearer picture of what his opposition looked like. At stake wasn't just the question of cooperation with the police. Castrillón was part of a block of Vatican officials who thought the sex abuse crisis was fueled by media hysteria, that "zero tolerance" was an over-reaction, and that removing priests from ministry without lengthy and cumbersome canonical trails is a betrayal of the church's legal tradition.