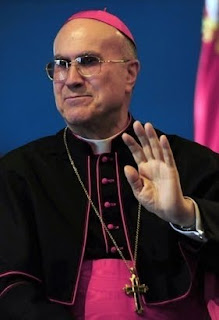 The main stream media and gay lobbying groups have twisted what Cardinal Bertone said about homosexuality and its link to sex abuse in the Catholic priesthood. What was a rather frank, open and non-secretive comment has led to the Cardinal being castigated by the world press and the homosexual community. My question is do they want us to be open and truthful or not?

In an article I wrote for our diocesan newspaper in 2002 shortly after revelations of the sex abuse scandal became known in Boston, I tried to put thing into proper context. This is what I wrote:

To understand what is happening in the reporting of clergy sexual abuse of minors, we need to be very clear on terminology.

An adult male (women are very rarely afflicted with this disease) who has sexual attractions for pre-pubescent children is usually diagnosed as a Pedophile. This is a serious mental illness that has no cure short of castration. True pedophiles can have hundreds of victims before they are stopped.

True pedophilia in the priesthood is extremely rare. Celibacy is not its cause. There have been notorious criminal cases involving priests pedophiles but these are the exception rather than the rule.

The greater problem in the priesthood is sexual abuse of teenagers, those between the ages of 13 to 17. This is not true pedophilia, but rather a condition known as “Ephebophilia.” This is more a case of arrested development. The perpetrator prefers to socialize with teenagers and in fact is emotionally a teenager himself or herself (women can be perpetrators also). This can sometimes lead to inappropriate sexual contact. Oftentimes the perpetrator deludes himself into thinking this contact is consensual. He is emotionally and morally immature. Psychological treatment can help this person to grow out of his or her immaturity or arrested development.

Those who are attracted to teenagers are so out of a heterosexual or homosexual orientation. All of us know of instances of adult heterosexual men who take advantage of teenage girls. There is less of a stigma concerning this type of abuse as when a homosexual man takes advantage of a teenage boy. But make no mistake, in either case, the adult bears the responsibility for the action even if the teenager is experienced beyond their age in sexual matters.

The majority of cases concerning priests are of a homosexual nature involving teenage boys. In most cases, bishops have sent offending priests to in-patient facilities for therapy. Many have responded well to treatment and were returned to active ministry without ever having another incident. With new “zero-tolerance” policies in most dioceses, we are seeing that even these rehabilitated priests are being removed from active ministry. The laity can now rest assured that no known sex offender will be returned to active ministry. However, it must be emphasized that out of the nearly 47,000 priests in this country, the vast majority of priests do not participate in this type of deviant behavior.

So, who is trying to hide what? We can castigate the Catholic priesthood up one side and down the other and paint the whole group as criminal pedophiles, but say anything negative about the homosexual community and you'll be crucified. Go figure!
Posted by Fr. Allan J. McDonald at Friday, April 16, 2010

You should resubmit this for your local paper in Macon. With the addition of the many ways the Church has been open and transparent.

"... but say anything negative about the homosexual community and you'll be crucified. Go figure!"

Yes indeed, that has been my experience starting from the earliest days of the revelations of 2002. The statistics of the John Jay comprehensive study are very revealing. And studies done since then have confirmed and indeed enlarged the extent of the "problem". Thanks be to God, the Holy Father, Pope Benedict, dealt with the whole issue very firmly in November of 2005:

The 2005 Instruction indicated the Congregation for Catholic Education, “in accord with the Congregation for Divine Worship and the Discipline of the Sacraments, believes it necessary to state clearly that the Church, while profoundly respecting the persons in question, cannot admit to the seminary or to holy orders those who practise homosexuality, present deep-seated homosexual tendencies or support the so-called 'gay culture'."

"Such persons, in fact, find themselves in a situation that gravely hinders them from relating correctly to men and women. One must in no way overlook the negative consequences that can derive from the ordination of persons with deep-seated homosexual tendencies...".

Cardinal Bertone has for several years been at the helm in seeing that the Bishops clearly understand and obey the Holy Father's instruction. He is therefore a target. He understands this and does not back down under fire. God bless him.