More proof that the New York Times is not to be trusted to tell the truth about the Catholic Church--a retraction! 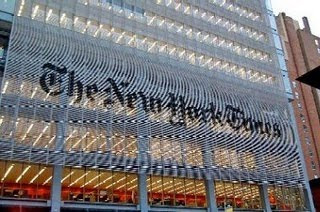 A MUST NEEDED CLARIFICATION FROM LAURIE GOODSTEIN CONCERNING HER MALICIOUS ARTICLE IMPLICATING CARDINAL RATZINGER'S INVOLVEMENT IN THE CASE OF NOTORIOUS SERIAL MOLESTER, REV. LAWRENCE C. MURPHY.
It should also be noted to Laurie Goodstein and other reporters, that if a priest is validly ordained he is a priest forever. Defrocking, what is called "laicization" in the Catholic Church simply returns a priest to the canonical (legal) status of being a lay person. He can no longer function as a priest except in an emergency, to hear the confession of a dying person or offer the Last Rites if no other priest is available. Shame on Laurie Goodstein who calls herself a reporter for not knowing this truth of the Catholic faith. Once a priest, always a priest--dogma that cannot be changed by the pope or the New York Times.

Events in the Case of an Accused Priest
By LAURIE GOODSTEIN
Published: March 31, 2010


The case of the Rev. Lawrence C. Murphy, accused of molesting as many as 200 deaf boys at a school in Wisconsin, stands out among the cases of sexual abuse by Catholic priests because of the number and vulnerability of the victims, and the availability of documents revealing how church officials handled the matter.
Milwaukee Journal Sentinel, via Associated Press

Father Murphy died in 1998, still a priest, despite documents showing that a priest had informed church officials as early as the mid-1950s that deaf children had complained that Father Murphy was molesting them. The police and prosecutors in Wisconsin were also informed by the victims and their advocates, but failed to act.

The documents show that during the mid-1990s, Archbishop Rembert G. Weakland of Milwaukee, facing the threat of lawsuits and hearing wrenching testimony from deaf adults who said they had been abused by Father Murphy, concluded that Father Murphy should be removed from the priesthood.

Archbishop Weakland appealed on July 17, 1996, to the Vatican office of Cardinal Joseph Ratzinger, who is now Pope Benedict XVI. Cardinal Ratzinger then headed the Congregation for the Doctrine of the Faith, which had oversight of the case because Father Murphy was suspected of using the confessional to commit his crimes — a crime that is considered particularly serious under the church’s canon law because confession is a sacrament.

The documents show that Archbishop Weakland sent two letters to Cardinal Ratzinger, and one to the Apostolic Signatura, the church’s highest court, asking for guidance on whether to conduct a canonical trial of Father Murphy.

After eight months, on March 24, 1997, Archbishop Weakland received a response from Cardinal Ratzinger’s second-in-command in the doctrinal office, Archbishop Tarcisio Bertone, now the Vatican’s secretary of state. Archbishop Bertone instructed the Milwaukee archdiocese to proceed with a canonical trial of Father Murphy, which could result in defrocking the priest.

On Jan. 12, 1998, Father Murphy sent a letter from his home in Boulder Junction, Wis., to Cardinal Ratzinger. He asked for a cessation of the trial because he was 72, had had a stroke and had repented, and because the case was beyond the statute of limitations.

On April 6, 1998, Archbishop Bertone wrote to Bishop Raphael M. Fliss of the Diocese of Superior in northern Wisconsin, where Father Murphy was living, saying that the statute of limitations was waived in this case. But Archbishop Bertone suggested that given Father Murphy’s letter asking for leniency, Bishop Fliss should employ “pastoral measures” instead of a trial.

Under church law, those measures can include prayer, repentance and restrictions on what kinds of ministry and sacraments the priest may perform.

Bishop Fliss wrote back to Archbishop Bertone on May 13, 1998, saying, “It is in my judgment that all reasonable pastoral methods have been exhausted” and that a trial against Father Murphy was necessary.

On May 30, 1998, while Archbishop Weakland, Bishop Fliss and the auxiliary bishop of Milwaukee were in Rome for a regular visit to the Vatican, they met with Congregation officials, including Archbishop Bertone.

A log kept on the Murphy case and signed “RJS” — the initials for the auxiliary bishop, Richard J. Sklba — briefly summarized the Vatican meeting on May 30, 1998: “It became clear that the Congregation was not encouraging us to proceed with any formal dismissal” of Father Murphy. The reasons were that for 24 years he had shown “apparent good conduct,” and that with so much time passed between the crimes and the trial, it would be difficult to try him.

The translated minutes were sent to Bishop Fliss on Aug. 15 by the Rev. Thomas T. Brundage, then the judicial vicar in the Archdiocese of Milwaukee and the official responsible for presiding over the trial of Father Murphy.

Father Brundage, who is now working in the Archdiocese of Anchorage, posted an essay this week saying he was never informed that the trial of Father Murphy had been halted.

He also said that he had been misquoted in both The New York Times and The Associated Press. In an interview on Wednesday, Father Brundage acknowledged that he had never been quoted in any Times articles about the Murphy case — and the paper did not misquote him. He said he was misquoted in an Associated Press article that was posted temporarily on the Times Web site, and he mistakenly attributed that to The Times.

He said the documents show that the Vatican had encouraged the Milwaukee Archdiocese to halt the trial, but they did not use strong language and actually order a halt. He said that he never saw the letter from Archbishop Weakland abating the trial until it appeared on the Times Web site last week.

“The only possible explanation I can come up with is that Archbishop Weakland withheld the letter, knowing the reaction I would have had,” Father Brundage said.

Father Brundage said he would have been appalled because he was absolutely convinced that Father Murphy should be put on trial, because, “This was a horrendous case.”