Our empty Church prior to the Palm Sunday Procession back inside. Yes, all the statues are covered in purple and the crucifixion scene above the reredos is covered in a veil of see through black. Quite stunning: 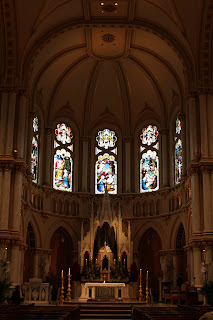 Arriving outside with palm in hand to begin the Liturgy of blessing of the palms, the reading of the Gospel of Jesus' Triumphal Entry into His hometown and then the procession into the Church: 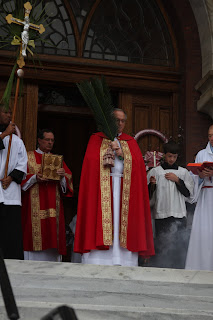 Priestly greeting at the Procession of Palms, this past Palm Sunday: 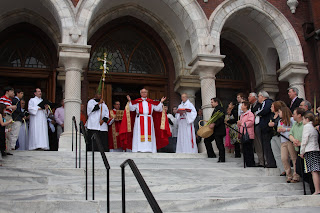 At the triumphal beginning of Palm Sunday’s Mass, Jesus is the "Toast of the Town!" The people welcome Him to Jerusalem with great joy and fanfare, palms and olive branches waving high, great joy and happiness. The rank and file laity of Judaism believe Jesus to be the long awaited Messiah, a political Messiah. Like a warrior, they hoped He would create an uprising against Roman rule and return the Promised Land back to the rule of the Jewish nation. They were waiting for Him to raise the sword and cut off the head of the Roman Emperor and all his men. Of course they did not truly grasp the type of Messiah Jesus is and this will lead to disaster or triumph depending on your faith perspective.

At the conclusion of Palm Sunday's Mass, Jesus is "Toast!"
In Jesus case, at the end of the day, the religious authorities of the day and the rank and file laity of Judaism and also the secular establishment were settling scores with Jesus. The audacity of Jesus to forgive sinners! Who does He think He is God? What about justice? What about all the families that the women caught in adultery broke up with her liaisons? What about all the people that the tax collectors swindled? What about all the victims of others' sins, MURDERS, CHILD MOLESTERS, MOBSTERS? How could Jesus forgive them? How negligent of Him? Doesn’t He care about or identify with the victims of sin? Really, just who does He think He is? He can't get away with His callousness! What did He know and when did He know it about these sinners that He has the audacity to forgive? Maybe He is complicit in their sins! Maybe He’s like those sinners! Forgiveness! Just who does He think He is? We’ll make Him know what it feels like to be a “VICTIM” to be the “VICTIM.” Crucify Him, crucify Him! We thought He would set Israel free and be our King, our political King after He conquers the Romans. Crucify Him, Crucify Him. And the Romans, they wondered what kind of a political insurrectionist He was; maybe crucifying Him was the best course for all of the Roman Empire. May be so?

Does the Passion of our Lord sound familiar to you today? How odd that during Holy Week, the Pope and the Catholic Church are enduring attacks from her own and from the world all focusing on issues of victimization, negligence and yes forgiveness. Why can’t the Church, her pope, her bishops, her priests and yes her laity identify with suffering victims of sin and crime? It all sounds so very familiar. Thank God for Jesus who is the "Toast" of the Passion--yes, the BREAD OF LIFE, THE VICTIM OF FORGIVENESS, THE LAMB OF SACRIFICE AND THE WAY, THE TRUTH AND THE LIFE!
COME BACK FOR THE EASTER TRIDUUM AND ESPECIALLY NEXT SUNDAY, EASTER SUNDAY, AND SEE WHAT JESUS DOES TO ALL THOSE WHO REJECTED HIM, MOCKED HIM, SCOURGED HIM, NAILED HIM TO THE CROSS AND KILLED HIM! COME BACK AND SEE WHAT JESUS DOES TO THOSE SINNERS WHO MAKE HIM FEEL WHAT IT IS LIKE TO BE THE VICTIM! IT’S PAY BACK TIME. WHAT WILL JESUS’ PAY BACK BE? STAY TUNED.

GOOD FRIDAY
The procession of the Holy Cross to Pope Benedict on Good Friday: 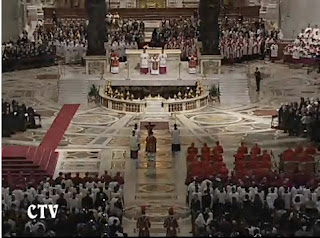 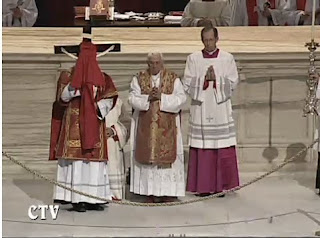 Veneration of the Holy Cross: 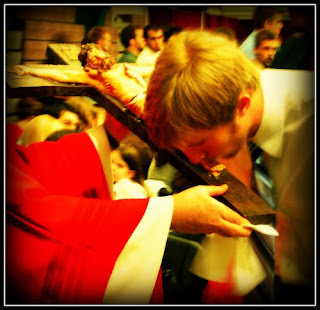 Introduction: As a creative newly ordained priest on Good Friday 1981, I decided to pass out some nails to the congregation as they came in for the Good Friday Passion Liturgy. In my homily I described the nails as our sins. My sins are a nail into the body of Jesus. My sins cause Jesus’ scourging. My sin is the crown of thorns. My sin is the heavy cross that Jesus carried. The seven deadly sins, pride, greed, envy, anger, lust, gluttony and sloth, all these crucified our Savior. While we are quite capable of giving good things to Jesus Christ, we are equally capable of giving Him sin and evil.

Main point: Good Friday exposes the impact of our sins and the power of God’s love to overcome them.

1. The more cynical among us question how in the world the damage our sins cause can be overcome?

A. In the news, a boyfriend chases his girl friend, intentionally knocking her car into an on-coming train killing two adults and two children instantly. How do you bring reconciliation to that? Two alienated and angry high schoolers go on a rampage killing classmates and teachers forever changing the lives of an entire nation. How do you overcome that? Domestic discord breaks up families, injures children. How can this be reconciled? >(Since 2000 until 2010, I could include the sex abuse scandal, now worldwide, engulfing the hierarchy and priests, not to mention the suffering it has inflicted upon countless victims).

B. And then we have Almighty God in the Flesh of Jesus Christ. We put him to death as a common criminal. He was too much for us, his kindness, his authority, and his love. His forgiveness and the appearance that he gave that the victims of sins didn’t need justice since He forgave the offenders of victims their sins. Our sins brought out the worst in us.

2. In Jesus Christ crucified, we have a power greater than the disasters the disease of our sins cause each other and Him.

A. There are two thieves that are crucified along with Jesus Christ. They represent all of humanity and the choice we have before our Savior. One of them blasphemes Jesus. Because of his sins, he is dead to God, he is dead to love, he is dead to reconciliation, and he is dead to eternal life. This is one scenario that our sins cause. The other looking at Jesus says, “Jesus remember me when you come into your kingdom. And Jesus responds, “This day you will be with me in paradise.” Only God can save and reconcile a repentant sinner; He does it from the cross. This man represents the other scenario, openness to God, openness to reconciliation, trust and humility in the presence of Almighty God.

B. We’re all thieves because of our sins; but which thief are you? The choice is yours.

Conclusion: In a few moments we will unveil the cross. Take a long, hard look at what we give to God in our sins! But from the Holy Cross the Savior looks at you. Stay tuned, payback is coming! What will it be?
Posted by Fr. Allan J. McDonald at Friday, April 02, 2010

Thanks Father for you inspiration.....The concept of the two is such a powerful image. U have answered my prayers....been wanting and searching and praying for a new approach to the crucifixion......May God continue to bless u this Holy Good Friday and the joy of the Easter Faith we share....Fr, Larry Parry Sound ON. Canada