THANK GOD FOR THE NEW MEXICO CATHOLIC BISHOPS! DO I HEAR AN "AMEN?" 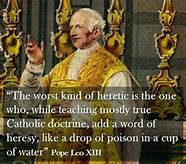 My comment first: Generalized condemnation, like what the New Mexico bishops make, is appropriate and more is needed from all conference of bishops and the National Conference too. But more important, local bishops need to meet with Catholic politicians who spew their ideologies publicly and after several meetings, if there is no positive satisfaction, the Catholic politician should be excommunicated or have a censure placed against them prohibiting them from receiving Holy Communion until a public lifting of the excommunication takes place after the appropriate public repentance and public reconciliation takes place.

“We are concerned by public statements by some legislators that seem to say that a faithful Catholic can support abortion or doctor-assisted suicide,” New Mexico's bishops stated March 6.

“Support for abortion or doctor-assisted suicide is not in accord with the teachings of the Church. These represent the direct taking of human life, and are always wrong.

State Representative Patricia Roybal Caballero invoked her Catholic faith earlier this month as a factor in her decision to oppose a bill that would have banned abortion after 20 weeks of pregnancy.

And last month State Senator Jerry Ortiz y Pino, also Catholic, introduced a bill which would force religious hospitals and individuals to act against their conscious and perform abortions.

The bishops wrote that “It is not appropriate for elected officials to publicly invoke their Catholic faith and to present their personal opinions as official Church teaching. This misrepresents Church teaching and creates a public scandal for the faithful.”

The bishops upheld Catholic teaching that “all human life is sacred, from the moment of conception to natural death, and must be protected,” and emphasized that “support for abortion or doctor-assisted suicide is not in accord with the teachings of the Church.”

“Even the weakest and most vulnerable, the sick, the old, the unborn and the poor, are masterpieces of God’s creation, made in His own image, destined to live forever, and deserving of the utmost reverence and respect,” the bishops stated, repeating the words of Pope Francis.

“It is not morally permissible for a Catholic to support abortion or doctor-assisted suicide,” they emphasized.
Recognizing Catholic legislators who support laws directed at supporting immigrants and the impoverished, the message applauded “their work giving voice to the voiceless.”
Citing the damages done to the soul by receiving, performing, or supporting abortions, the bishops acknowledged that “God’s forgiveness is always available to us if we seek it, so that we may heal our soul and be reconciled with God, the Church and others.” They promoted the sacrament of confession and the Project Rachel ministry for men and women who are in need of support after participating in an abortion.
“We want to be clear,” the bishops concluded. “Individuals and groups do not speak for the Catholic Church. As bishops, we do.”
“We visit the New Mexico Legislature when it gathers and host a time when together the priorities of the Church are made known to the legislators. We take the Gospel to the public square in public meetings and hearings as well as in private meetings and conversations with elected officials.”
“We pray for all legislators and through the New Mexico Conference of Catholic Bishops are here to aid in the formation of consciences,” they noted. “We will continue to collaborate with many others to uphold the dignity of the human person through a consistent ethic of life from conception to natural death.”

Good thing "Father" Kavanaugh isn't a priest in Mexico! The Canadian Bishops also lowered the boom on Trudeau in Canada for funding abortions outside the Country which Trudeau, another fake catholic, decided to pursue after our first "Catholic" President, Donald Trump, stopped the US funding of abortions overseas. By the way, did the USCCB congratulate Trump for his pro-life efforts , or are congratulations only for politicians who operate contrary to Church teaching?

Father Kavanaugh does not support abortion. He believes that abortion in every case if an intrinsic, moral evil.

To say otherwise is to slander Father Kavanaugh.

But, then, a person who, even using quotation marks, refers to Trump as Catholic is seriously divorced from reality.

How long before Francis, after being informed that the bishops upheld the moral teaching of the Church, attacks and condemns the bishops. I bet by summer we will have a Vatican investigation into the bishops conference of New Mexico. Does anyone doubt that IS going to happen.

I second the outrage on behalf of Fr. Kavanaugh. TJM, it's not funny even in jest or tongue in cheek. You can disagree with him and his assessments on any number of issues, but unless you have evidence of him counseling people towards abortion or direct evidence of him not making it a big deal, you owe him an apology.

I've made no secret of disagreeing with him on any number of things but most (if not all) are over prudential decisions. I've never read any post of his that strikes me as heresy or immorality. We do others and ourselves an injustice in roasting their names by reducing their positions to a caricature. If he's wrong about something, a direct quote is better than any paraphrase.

Could one be in a state of grace by voting against the 20-week ban on the grounds it does not go far enough? In other words, passing it would imply it is OK for abortion before that time? I doubt that was the mindset of the legislator in questions, as finding Democrats willing to restrict abortion even to a small degree is, these days, like trying to save snowballs in July.....

I would not have an issue supporting 20 weeks if it is the best one can get at the moment, trying to minimize the damage so to say.

I don't know. An abortion before 20 weeks is still murder. If this were, indeed, being done as a step toward ending abortion, it may be possible to agree. But, I see it being done as a way of strengthening abortion as a policy...as in, before 20 weeks it is ok to commit murder. I don't think it helps. 20 weeks is five months, for God's sake. Some babies are viable in premie ICU nurseries not long after that. No, just another rationalization for abortion.