CONFLICTED IN HILTON HEAD ABOUT THE EF MASS!?! 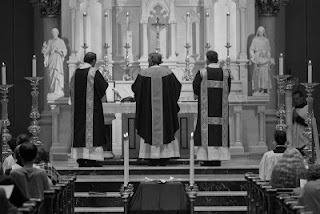 I am on my day off and take it on nearby Hilton Head (40 miles from Savannah) on the coast of South Carolina where nothing could be finer!

I have been reflecting on the glorious 3rd Sunday of Lent High Mass in the Extraordinary Form that I celebrated yesterday at our splendid Cathedral in historic and magical downtown Savannah.

My on-going conflict has to do with the fact that in the Sung EF Mass, the priest and ministers celebrate the Mass somewhat disconnected from the choir which sings a parallel "Mass".  What this means specifically is that even though the choir sings the Introit, the priest after incensing the altar says it quietly to himself. The same is true of the gradual/tract--while the schola chants these the priest nonetheless says it to himself.

The same is true of the Kyrie, Gloria and Credo, the priest recites these silently and if the choir has not completed it during the Gloria and Credo, the priest sits until is is completed. At the Cathedral as well as my former parish of glorious St. Joseph in Macon, I opted to chant these wth the choir and never sat at a normal Gregorian chanted Mass. Kosher?? I ask; you answer.

The earliest reform of the 1962 Missal, the short-lived 1965 Roman Missal, this parallel actual Mass of the priest and ministers with the "Mass" of the choir was suppressed or at least specifically discouraged. I tend to side with the suppression.

However, I have experienced both ways to celebrate the EF Mass and I must say that I can see the "mystical" or the mysticism of the parallel way of celebrating the EF--it shows forth in a powerful way the "drama" of what is celebrated in an unbloody and glorious "Risen" way.

Can you say, "Needless repetitions"?

Sitting: I have seen it both ways and believe it is an allowable option. Same for the kneeling during Credo: usually get a twofer at High Mass. There are other examples. We have priests from various backgrounds and as such they may be faster, louder, or more easily understood. When the schola is there I have place holder that keeps me in the right place. I can read the section, or recite it and meditate on it as the choir catches up. If I have no missal then I can 'sing' along with the Ordinary parts and listen to the seasonal and daily parts.

I like the parallel tracks of the sung Mass. Depending on where I sit I can keep up if the priest's actions are obscured. I also listen for pronunciation when I know we have a top notch schola master. My typical section is among the local college professors, lawyers, and aged worshipers who have a low, but understandable recitation of key parts, e.g. Credo. It helps me learn and keep pace as well as expand my awareness and focus especially for personal intentions. I think it is a wonderful and helpful device.

At our parish the Ordinary is always Latin, as are the readings. The Epistle and Gospel are read again, in English, to kick off the homily. It is assumed everybody knows the Ordinary well enough that these are the only parts that need translation.

The parallelism of "parallel tracts" in the traditional Mass is regarded by many (including me) as one of its glories. Personal opinions may differ, but they are all irrelevant to proper ars celebranda.

It is altogether improper for you, any priest, or anyone else to put into practice his own personal opinions about the rubrics of the Mass. You should never forget, even for a moment, that you are the humble servant of the liturgy, not its master. And the priest standing at the altar can present no greater personal gift than his humility and obedience.

The faithful in the pews routinely see clerical opinions inflicted on them in the Novus Ordo. They deserve to be utterly and totally free in a traditional Mass of any manifestation of the individuality of the priest who as serving in persona Christi, and not as himself.

The priests on Hilton head are saying the mass correctly. All the traditional societies say mass this way, FSSP, ICKSP,IBP, SSPX etc.

I have been told, and have found this to be true, that the mindset for the OF, which is where I come from, and the EF Masses are different. I find the OF is more linear and the EF has more going on at once and, as a result, is more mystical. Many things happening at once in the EF contributes to this atmosphere.

Now, after attending for months, if you were to ask me if I would want the priest and the choir to always be in sync I would be very hesitant to agree. My guess is that if I were to be asked again in a few months, I would say 'no'. I'm finding my own mindset to be changing, as I learn to appreciate the once odd but now beautiful nuances of the EF.

Personally, I would prefer the celebrant and choir to chant together the Ordinary and Proper much like the celebrant may recite these parts of the Mass with the laity in a Dialogue Mass. However, this is only a preference. I find that when I defend this practice, I fall into the "linear" mindset that Yvonne mentioned. This feels like an acceptance of the thought process that animated the replacement of the traditional Offertory Prayers with new constructions that do not mention the Sacred Host and Chalice before the Consecration. Also, this mindset is foreign to what I know about ancient liturgies that often contain duplications, but were accepted because the Sacred Liturgy is a mystical and not always completely understood action.

Until the EF crowd accepts the value of Sacrosanctum Concilium, and until the OF crowd accepts all the riches of the Roman liturgical tradition, we will never settle any of these disputes. We'll just keep being either defensive or meddlesome. I pray for wisdom.

Father, would you really not sit at a Requiem Mass while the schola sang the Gradual, Tract and Sequence? The congregation are seated and only stand for the Gospel. Why stand at the altar with nothing to do?

In the OF you would be at the chair anyway.