IF THIS IS WHAT POPE FRANCIS HAD IN MIND FOR THE ECUMENICAL RENEWAL OF CATHOLIC MUSIC IN THE CHURCH, THEN I'M WITH HIS HOLINESS 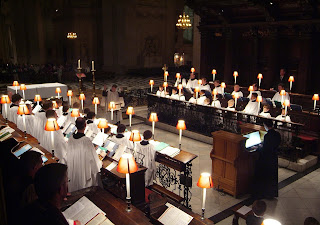 There are those of the Praytell ilk who think Pope Francis had words put into his mouth that His Holiness read mindlessly when His Holiness said the following this past Saturday:

“Sometimes a certain mediocrity, superficiality and banality have prevailed, to the detriment of the beauty and intensity of liturgical celebrations.”

But then His Holiness concluded His Holiness' remarks by saying this to raised eyebrows in the Catholic blogdom world:

"We need to promote proper musical education, especially for those who are preparing to become priests ....with an ecumenical attitude.”

If the following links from a Lutheran resource are  what Pope Francis has in mind for an ecumenical attitude about the renewal of Catholic music, I endorse it 100%!!!!!!!!

Propers of the Lutheran Mass: Click on any of the following to see the marvelous chants that Lutherans have which they encourage their congregations to chant!!!!!!

Pray Sniff is invested in failure! Re-arranging the deck chairs on the HMS Titantic!

I'd would like to think so, but I doubt it.

FrAJM, I appreciate your sense of humor but there are times, like this one, when I am not sure of your point. There are several paths to take with this, but it seems that you are intimating that reverent Liturgy and music is merely a facade since that is all the Lutherans have.

Thanks for posting these links, Father. Once I purchased a Lutheran Hymnal from the 1940s at a used book shop that contained various proper chants and was impressed with how similar certain parts of the Lutheran liturgy were to some parts of the traditional Roman Mass (and dissimilar to the modern Roman Mass, ironically).