YES WE WILL EAT MEAT AND PARTY 🎉 LIKE IT IS 1999 THE THIRD FRIDAY IN LENT!

AND WE WILL CANCEL THE WAY OF THE CROSS THAT FRIDAY TOO! SO THERE! 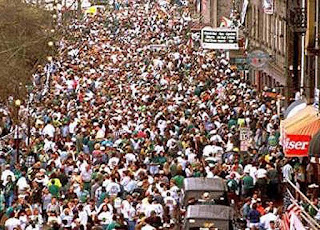 I have returned to the metro Savannah area after a 25 year hiatus. Savannah has one of the biggest St. Patrick Day parades in the whole wide world 🌎 if not solar system or universe! No brag just fact!

This year the most wonderful time of the year, March 17th falls on a Friday! The days of gluttony, drunkenness and out right apocalyptic immorality leading up to and following this most wonderful day as a preglow and afterglow rival anything New Orleans has!

Thus the Church in her great wisdom has dispensed Catholics and non Catholics alike from the Lenten Law of abstinence! I have canceled our Way of the Cross in the same spirit of Caligula!

I think it was about 1987 or so when a huge controversy broke out in the Hostess City when street vendors days prior to the parade began to sell green color condoms with the image of Saint Patrick on it. This caused quite a negative reaction from our then bishop, now deceased, who told the Saint Patrick's Day Committee if something wasn't done he would withdraw from the parade and cancel the huge public Mass at the Cathedral on that day.

Of course, this was front page news and made the TV news. As the MC of the Diocese and the Cathedral's Associate Rector,  I was interviewed by one of the local TV stations about my thoughts. I had never spoken about condoms before in polite company or as a priest, so I thought the question was interesting one but now I can't remember what I said.

And if this crisis was not huge enough, it was exacerbated by another huge controversy fomented by our late bishop! What was the correct pronunciation of the word condom? Was is con-dum or con-dome? Our late bishop opted for the second option. Maybe it was his North Dakota way of speaking?   I avoided that controversy in my television news interview and didn't even use the word!

But the Irish mafia in the city dealt swiftly with the vendors and the green condoms were no where to be found on the streets of Savannah with the image of St. Patrick on them.

DISCUSS AND ENJOY! BE HERE OR BE SQUARE, SAVANNAH SQUARES THAT IS! 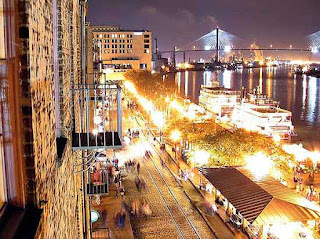 We're only a few days away from one of the most exciting days of the year! That's right, St. Paddy's Day in Savannah, Georgia. If you've never heard of Savannah's big St. Patrick's Day Parade then you are about to my friend! There is something magical about St. Paddy's Day in the heart of Savannah. Savannah's St. Patrick's Day Parade has always been and always will be a monumental event. There is something so fun and special about a community coming together to celebrate with music, dancing, food and drink. (Lots of drinking and merriment will be had if I say so.) So if you're looking for a reason to get away, look no further. Here are just a few reasons to attend Savannah's St. Paddy's Day Parade:

1. Savannah is a beautiful historic city.
2. We have the second largest St. Patrick's Day Parade in the nation.
3. It's basically a weekend-long event.
4. Everyone is considered Irish on March 17.
5. Dressing up in your favorite green attire is a must.
6. Beads galore, everywhere.
7. Beer, beer and more beer.
8. Savannah's parade really gives you a sense of tradition and community that you wouldn't get elsewhere on St. Patrick's Day. It's such a familial and joyful event for the city.
9. Wet Willies is the place to be.
10. Clydesdales clapping down the squares.
11. There are so many different experiences each year you attend.
12. High school girls run up to peck the BC boys and marching soldiers.
13. The high school marching bands killing it.
14. The annual greening of the fountain in Forsyth Park.
15. Your family has a special spot in one of the many squares where they set up shop.
16. You've probably been in the parade or know at least one or two people walking in it.
17. River Street is always a madhouse at the end of the parade.
18. You'll see friends and family you haven't seen in months and get to celebrate with a beer in hand!
19. All the local high school and returning college students will gather in Chippewa Square.
20. Trying to find a bathroom is a real struggle on March 17. Hold your pee, pay a fee or find a dirty, slimy portable bathroom.
21. Heading down by 6 or 7 a.m. just to find a parking spot (you might as well park the night before and be dropped off, or just be dropped off in general).
22. The parade is just one aspect of St. Paddy's Day. The night life is where all the fun is to be had.
23. The motto: "Kiss me I'm Irish."
24. Catholics will attend mass in the Cathedral before the parade begins.
25. Roaming the streets of Savannah is like being in a sea of green. You don't know whether you're seeing a mirage or not.
26. St. Patrick's Day is the day where everyone celebrates by jugging a beer, donning their very best green and having one heck of a party!
In case you haven't made up your mind yet, you should definitely make plans to come to Savannah for the St. Patrick's Day Parade!
Posted by Fr. Allan J. McDonald at Wednesday, March 08, 2017

You forgot "Hard Hearted Hannah, the Vamp of Savannah GA!"

When I was stationed at Fort Stewart I was assigned to the 2nd Brigade, 3ID. I was there 3 years and wouldn't you know......my Brigade Commander, then Colonel Whitcomb (LTG Ret.) made sure the brigade was in the field on exercise every year rather than risk his 4000 soldiers in downtown Savannah. Sadly only my wife can claim to have "been there, done that".