JUST HOW MUCH OF THE MASS DO YOU LIKE TO SING OR HEAR SUNG?

I think this "Mass" is actually a High Anglican "Mass" but the chant is very similar to what a Catholic priest would do at this point (press "Watch on Vimeo to view). Does your priest do it and is it appreciated or do people hate it? I ask, you answer: 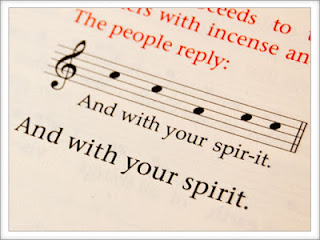 When you ask a lay person about the Mass and music, you will get all kinds of subjective answers. Objectivity seems to be tossed and many think that simply because they  believe something, like something or dislike something then they must be right. It is a form of Gnosticism.

The Ordinary Form of the Mass allows for much more fluidity in terms of what is sung or isn't. The EF Mass has a strict structure: Low, no chanting, High, all is chanted, Solemn High, much more ceremony.

In the Ordinary Form many pick and choose what should be sung and most believe that it is hymns that should be sung, meaning "filler" not the intrinsic hymns of the Mass, like the Kyrie, Gloria, Scripture readings, Alleuia, Credo, Sanctus, Mystery of Faith, Amen, Our Father, Agnus Dei. (How many of you ever chant the Creed??? This is a hymn of the Mass, more important to chant than to sing Be Not Afraid!)

Also most Catholics don't know that the official Introit as well as Offertory and Communion antiphons exist in the Ordinary form as do the Gradual and Tract. They have never heard these chanted although these are sometimes printed in Liturgical worship aids like missalettes (not the gradual or tract,though).

Finally, most do not understand that the priest's parts of the Mass can be sung, like the Sign of the Cross, Greeting, introduction to the Penitential Act, forms b and c of the Penitential Act, the Collect, Prayers over the Offering, Preface Dialogue and Preface, elements of the Eucharistic Prayer beginning with the Epiclesis and words of Consecration and doxology, Prayer After Holy Communion, Blessing and Dismissal.

What parts of the Mass do you normally sing in your parish and which parts do you wish would not be sung and do you appreciate or hate the priest chanting his parts from the Roman Missal?

Press here is a good article on chanting the Mass from the New Liturgical Movement.
Posted by Fr. Allan J. McDonald at Wednesday, March 15, 2017

My knowledge of Anglican liturgy is only internet based, but this versus populum celebration does not seem particularly "high" to me, even if its level of solemnity does put to shame the typical Catholic parish Novus Ordo Mass.

For instance, an Episcopal parish that uses the English Missal is St. Clement’s Church in Philadelphia. From the pastor's welcome there:

Our worship is Anglo-Catholic, our music and liturgy traditional – and spectacular. Our growing outreach flows from the Mass, the preaching and teaching of the Gospel, the daily Divine Office. . . . If you want to experience a little of “the beauty of holiness”, the High Mass according to the English Missal gives…

Scan through the photos here to see a Mass that looks "higher" in mere visual appearance than the usual (actual Catholic) solemn high Mass. That being the case, the following, also from the welcome, seems curious:

"We welcome people of all colors, male & female, straight & gay, single & married with children, rich & poor. So you qualify! No matter who you are, you belong here."

In the Roman Catholic world, we tend to associate traditional liturgy with orthodox doctrine. But I've also heard an allegedly "nose-bleed high" Episcopal parish in Atlanta described as "progressive and welcoming".

In other words, they have no standards. They also committed a terrible faux pas by not welcoming the "transgender" crowd.

I happen to agree with the statement in their website. But I think, as TJM points out, we would use a lot of bandwidth in a litany of the sinners that should be in our hall when the goal should be to rid ourselves of that burden rather than let it define us.

I prefer that everything be sung in the OF....

You can actually sing everything in the OF, including the Canon, and the new English version has adapted the Latin chants which Solesmes produced for the NO in 1974.

There is a case for arguing that at least some of those who fabricated the new Mass intended it to be sung (as is the Eastern Divine Liturgy), thus solving the 'Low Mass problem'. But those who favoured informality and diversity seem to have prevailed.