AS ANOTHER BISHOP PROMOTES AD ORIENTEM, ISN'T IT TIME FOR BISHOPS, ALL BISHOPS, TO MOVE FORWARD THE PROPER CELEBRATION OF THE ORDINARY FORM OF THE MASS THAT WHEN CELEBRATED PROPERLY IS IN CONTINUITY WITH THE EXTRAORDINARY FORM 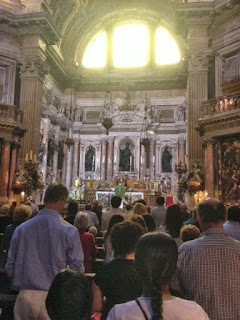 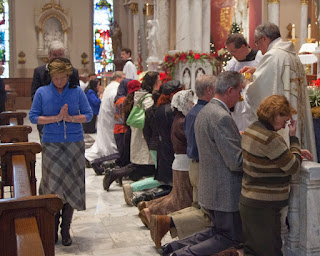 In my post below, the good bishop of LaCrosse, Wisconsin shows his openness to the celebration of the Mass ad orientem as it is a legitimate option in the Roman Missal of the Ordinary Form. This is such a positive development.

But let's look at other things that other bishops and even Pope Francis are saying which bodes well for the Ordinary Form to be celebrated properly as an organic development stemming from the reintroduction of the Extraordinary Form of the Mass.

1. Pope Francis highlights that music in the Mass since Vatican II has been a mixed bag and needs to be improved. Simply looking at papal Masses at St. Peter's with the pope gives us clues to his orientation: 1. Gregorian Chant is widely used for the propers and the propers are chanted even in addition to a processional hymn and anthems in addition to the Offertory and Communion antiphons.

2. We can go back to 1907 to discern what is good music in the Mass and what isn't by this one quote:

I think we may say that modern individualistic music, with its realism and emotionalism, may stir human feeling, but it can never create that atmosphere of serene spiritual ecstasy that the old music generates. It is a case of mysticism versus hysteria. Mysticism is a note of the Church: it is healthy and sane. Hysteria is of the world: it is morbid and feverish, and has no place in the Church. Individual emotions and feelings are dangerous guides, and the Church in her wisdom recognizes this. Hence in the music which she gives us, the individual has to sink his personality, and become only one of the many who offer their corporate praise.

3. And the good bishop from La Crosse writes the following commonsensical observation:

Asking that the grace of this blessed season of Lent be with you all, I particularly pray with you and for you during the celebration of the Mass, the source and summit of our faith. This treasure has been entrusted to the Church to be guarded and celebrated. It is not ours as priests to control and define the Mass, but to celebrate it as it has been handed down to us. I am grateful for you, brother priests of our Diocese who with great care and reverence celebrate this great Sacrament for the People of God.

My final comments: Attention to detail, choreography and the general instruction of the Roman Missal is essential and this needs to be spelled out. Going to the Extraordinary Form's aspects of this is essential, not so much in its rubrical details but the general ethos of this Mass as it relates to reverence and mystery, the vertical elements of the Mass which must be recovered.

Apart from the three points above, the single most important restoration in the Ordinary Form of the Mass which is already allowed in its General Instruction is the reintroduction of kneeling for Holy Communion and receiving on the tongue. Standing for Holy Communion and receiving in the hand as well as Communion from a common chalice have been the single most deleterious aspects of the Mass which has led to the diminution of reverence and respect for the Sacred in the Mass and should be address immediately. We all have horror stories concerning the manner in which people receive in the hand today and how the Host is taken without consuming it! The precious blood is splashed and splattered on people's clothes, shoes and on the floor. This should be considered a sacrilege and outrageous and those to blame are the bishops who do not act to restore communion on the tongue and kneeling and the Precious Blood by intinction which prevent such outrageous against the Sacramental Real Presence of our Lord, God and Savior!

Nothing in this post would be difficult to implement after proper catechesis from the top down.

On this Saint Patrick's Day, may his intercession lead to the snakes of the Mass being banished in our day! 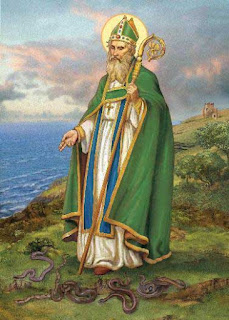 "Nothing in this post would be difficult to implement after proper catechesis from the top down."

Of course this king of thing happens in places like upper Wisconsin, Wyoming, North Dakota. Great. They actually have solid bishops up there too.

What about the rest of us who have to live here in the Liturgical Wasteland?

Frankly, I'm tired of seeing these posts Father. They don't make anything better for us and only create a longing for what we are consistently denied by the status quo boys at the chancery. I know you mean well, but you're doing the equivalent of showing a starving man a rich feast through the window of a place he is forbidden to enter.