FINALLY AN ENGLISHMAN ANSWERS MY QUESTION ABOUT THE APPEAL OF MODERN MUSIC, LIKE WORSHIP AND PRAISE AND OTHER CONTEMPORARY MELODIES THAT SOUND LIKE PIANO BARS OR BROADWAY PRODUCTIONS 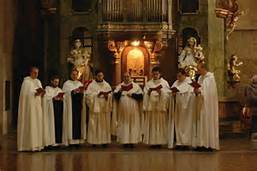 I think we may say that modern individualistic music, with its realism and emotionalism, may stir human feeling, but it can never create that atmosphere of serene spiritual ecstasy that the old music generates. It is a case of mysticism versus hysteria. Mysticism is a note of the Church: it is healthy and sane. Hysteria is of the world: it is morbid and feverish, and has no place in the Church. Individual emotions and feelings are dangerous guides, and the Church in her wisdom recognizes this. Hence in the music which she gives us, the individual has to sink his personality, and become only one of the many who offer their corporate praise.
Posted by Fr. Allan J. McDonald at Wednesday, March 15, 2017

This is terrific. And to make it even more fun it will generate hysterical responses.

Terry was, of course referring to the late Romantic 'operatic' style, which was undoubtedly popular. Not that it was bad music per se; the first time I heard Gounod's Messe de Sainte-Cecile (at Brompton Oratory) I liked it so much that I had to rush out and buy a CD of it.

Nowadays the 'popular' style is characterized by its total lack of any musical merit.

"the first time I heard Gounod's Messe de Sainte-Cecile I liked it so much that I had to rush out and buy a CD of it."

Ditto, even though I really tend to feel--along with, apparently, Pius X--that only chant and polyphonic ordinaries should be heard at Mass.

All the same, it would be a shame if the Masses of Haydn, Mozart, Hummel etc. were relegated to the concert hall. Liturgical reformers (Pius X included) tend to have a puritanical bent. This was also evident at Trent, when many of the reformers wanted polyphony banned and a few wanted no music at all.

In an essay on Mozart's church music published in 1956, Karl Geiringer concludes: 'In Mozart's native country no objections are raised against occasional lengthiness or the use of a full orchestra including 'noisy' instruments such as trumpets and timpani ... Even small churches use in their services the sacred music of Haydn, Mozart, Schubert, and Bruckner; works that are all rooted in the same basic attitude, through which all the resources of music are used to glorify the Lord. In letting this exquisite music participate in worship, the Church in these countries [ie Germany and Austria] has enriched the life of countless devout Christians.'

Amen to that. And the tradition continues to this day.