AAAHHHH! ORIENTEM: PROMOTED BRICK BY BRICK BY YET ANOTHER BISHOP! 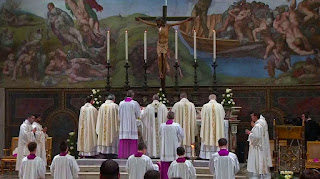 Pray Tell  must be blue as it is reporting, much to their chagrin, I suspect, that Bishop William Callahan of the Diocese of Lacrosse, Wisconsin wrote a letter to priests on March 8th referring to celebrating Mass ad orientem. Although the letter mentions Cardinal Sarah’s support of  ad orientem, it does not mention Pope Francis’s response to Cardinal Sarah. The letter admirably emphasizes respect for people’s sensitivities and avoidance of division. But it seems to express some favor for the ad orientem posture.

My comments first: I want to praise this bishop for recognizing that the current General Instruction of the Roman Missal allows for many options not the least of which is intinction for Holy Communion and receiving while kneeling. While he doesn't touch on this, but rather promotes a sound approach to celebrating the Mass ad orientem as it was done for about 1,900 years prior to Vatican II, as attested to by the unbroken ad orientem tradition in the Divine Liturgy of the East, it is good to know that priests need not be micromanaged when implementing what is allowed by the Roman MIssal as long as there is proper catechesis of those who will experience options that are not used.

My Dear Brothers in Christ,

May the Lord give you peace.

....My message to you today concerns itself with sacred things, “ad orientem.”

Asking that the grace of this blessed season of Lent be with you all, I particularly pray with you and for you during the celebration of the Mass, the source and summit of our faith. This treasure has been entrusted to the Church to be guarded and celebrated. It is not ours as priests to control and define the Mass, but to celebrate it as it has been handed down to us. I am grateful for you, brother priests of our Diocese who with great care and reverence celebrate this great Sacrament for the People of God.

(This is a bombshell, coming from a bishop, wouldn't you agree?) The worthy and proper celebration of the Holy Mass has legitimate options; one that has become more prominent in the last year is the posture of Ad Orientem. This was begun by a statement of Cardinal Robert Sarah, Prefect of the Congregation for Divine Worship, who encouraged the practice beginning in Advent of 2016. This has led a number of our brothers to start using this option. In some places, with proper consultation and education, it has been a blessing and has even helped to draw a parish together. In other places, where the same care to have proper consultation and education was not observed, it has become an issue of divisiveness.

Because of the new prominence of this practice the topic has been discussed with the College of Deans in addition to the Presbyteral Council. During both discussions, I have shown my support for this practice as well as a deep concern that it be implemented appropriately and after proper consultation with the leadership of a parish, after truly hearing and respecting the People of God and after good education of what is being expressed in the change of posture.

Between the two meetings of priestly leadership, I somehow managed to confuse the ideas of permissions, approvals, etc. I write this letter to clarify the procedures I desire to be in place when considering the implementation of the posture of Ad Orientem as a regular practice in a parish.

1.    It is my desire to be informed before any such practice is undertaken so I might ensure through the Office of Sacred Worship that Holy Mass is celebrated in a consistent manner throughout the entire Diocese, with proper consultation and support of the People of God and after an appropriate period of education and discussion.

2.    It is my hope that where consensus of the People of God is split over this practice and multiple Masses are offered on any given weekend that both approved postures would be offered.

I hope we will all enjoy a seat “by the Eastern wall” in our churches and that we will understand the significance of such a thought. In the meantime, know that I pray with you and our dear Priestly and Holy People. Have a blessed Lent and never tire of celebrating the Eucharist anticipating the coming of the Lord.
Dear brothers, you are close to my heart and always in my prayers.

Bp. C: "The worthy and proper celebration of the Holy Mass has legitimate options; one that has become more prominent in the last year is the posture of Ad Orientem."

Fr. M: "This is a bombshell, coming from a bishop, wouldn't you agree?"

Why, praytell, would you consider it a "bombshell" when a Catholic simply acknowledges a self-evident fact? Is it really that unusual to hear a factually truthful statement by a bishop?

Wow, a bishop who has "evolved" and matured! He must be reading Southern Orders!

Good for him. When something novel isn't working, isn't it time to rediscover our liturgical roots and tradition?

The answer to your question, sadly, is YES!

A lot of the Episcopal Church has "copied" Vatican 2 by moving the altar to free-standing, the celebrant facing the people, but there are still some parishes (guess they have "local option" so to say) that celebrate the Eucharist the "old way", with the altar at the back. Often in the Episcopal Church, the choir is located on two sides (facing each other), one side behind the pulpit, the other behind the lectern, and the altar at the back. Visiting such a parish one time in North Carolina, the celebrant typically will be standing/sitting behind the pulpit, leading the liturgy of the word portion, and then at the offertory proceeding to the altar. In some parishes, the priest wears the alb and stole (and maybe a cope) for the liturgy of the word, then puts on a chasuble at the offertory---perhaps this reminds people of the two main parts of the Eucharist.

As liberal as that Church is, in some ways liturgically it is more conservative than what I see in a Roman church. For instance, I have never been to an Episcopal church that does not have an altar rail, and often, when there is a hymn to sing, you will sing all the stanzas, even if that means all 8 of "For all the Saints". You get a feeling you are not rushed...perhaps the liturgy will take an hour fifteen, though that may pale with some Orthodox services!

So is Ad Orientem now forbidden in the Diocese of Savannah outside of the EF Mass? I think I read where Bishop Hartmayer asked his priests not to celebrate the OF Mass Ad Orientem?! If so, what is the reasoning behind his order? Of course, I understand, him being the Bishop and saying so is reason enough.

Stephen I have not heard him say that and there is not written directive. The only parish doing it was St. Joseph at one of their 5 weekend Masses only and for four years which led to the EF Mass being celebrated once a month at that 12:10 Mass thus having the ad orientem continuity. If the option were clearly allowed with strong prior catechesis I wonder how many more parishes in the diocese would do it.