From Sandro Magister formerly of Chiesa: 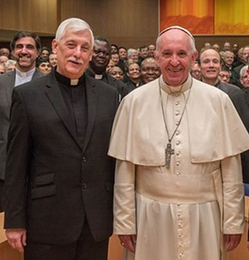 More of that "evolution of doctrine" that Kavanaugh loves so well....

How much longer is the farce, that is Francis going to continue. Chaos, confusion, ignoring pleas for clear teaching, allowing bishops to tolorate immorality, scandal after scandal after scandal. The pope just meet publicly with a "married" gay couple with a big huge smile. And surprise surprise the superior of the Jesuits is a heretic. What that man is doing is evil and it is unjust for souls to be put in danger by that man. He is leading millions down the road to perdition with a big smile. The man needs to go and those bishops and priests that have remained silent in the midst of what's going on share in his sins and are responsible for the damage he is doing to souls. All of you in the clergy who support this evil by your silence will face your maker, alone, and will be judged. You KNOW what Francis is doing is wrong. You know it.

Not only Kavanaugh, but many other luminaries understand that doctrine develops/ evolves.

I direct your attention to "An Essay on the Development of Christian Doctrine" by Cardinal Newman.

And, if you're not a fan of Newman, you might try, "Thomas Aquinas on the Development of Doctrine," Christopher Kaczor, Theological Studies (62)2001.

"Reason is used in theology not to prove the truths of faith -- which are accepted on the authority of God -- but to defend, explain and develop the doctrines which have been revealed (art. 8)."

Or, if that doesn't suit your fancy, you might look to St Pope Pius X who wrote to the Bishop of Limerick regarding a defense of Newman's ideas on the development of doctrine he had written, "Be assured that we (Pius X) strongly approve of your pamphlet proving that the works of Cardinal Newman — far from being at variance with our encyclical (Pascendi) — are actually in close agreement with it . . ."

"In conclusion, the transition from a religiosity of the law to one of discernment is sacrosanct, but it is full of pitfalls. It requires a Christian formation of an excellence that unfortunately is rare today. And also that one have true love and deference for the divine Word."

How I wish I had been able to say this as eloquently as the good Reverend Bertacchini has, although it was what I was trying to express a few posts back when speaking of not following heretical or quasi-heretical pronouncements by bishops.

As was mentioned by Fr. McD then, only the Church can declare someone a heretic, however, it is critical for lay people to know them when they see them (or know a heretical statement when they hear one)....

Thanks Fr. McD for this article. If you had not posted it I never would have seen it. It helps my Catholic education immensely.

Development of doctrine is one thing. Applying historical-critical exegesis in order to say in effect: 'We don't know if Jesus actually said this, and if he did he may not have meant it, and in any case he was addressing a different cultural milieu in a different era, so it probably doesn't apply to us' is not something Aquinas or Newman would have recognized.

'Anonymous' knows this full well, but is trying to overawe the plebs with his 'superior' knowledge. Sorry, mate, it might wash with your congregation, but it won't wash here.

Church doctrine is devolving, Kavanaugh, not evolving. It is devolving because people like you insist upon applying inappropriate paradigms, such as evolution, to doctrine.

Evolution and development are both appropriate terms to apply to our understanding of doctrine.

The Truth does not change. However, the manner in which we understand, express, and teach said doctrine does evolve and develop.


I don't see how anyone, in any way, shape, or form, can connect Cardinal Newman with the Jesuit Arturo Sosa Abascal, other than both being ordained to the Catholic priesthood. I don't accept that Cardinal Newman's development of doctrine would extend out to embrace the development produced by Father Abascal's method of discernment. There is a temporal chauvenism, really a form of gnosticism which is at work here, that somehow after two millenia, there are those in our own time that can discern what Jesus actually meant. It's not as if this sort of thing has't cropped up before in the long history of the Church. If you accept that the Scripture handed down to us is the inspired work of God and that the Holy Spirit guides the Church in revealing to us what the true understanding of what it contains is, then you won't be drawn into what Father Abascal, and others like him say.

George, they will! John Henry Newman was the great theologian of conscience, and yet time and time again heretics who purport to be Catholic try to claim that he elevated private opinion over the doctrine of the Church. This is to stand truth on its head and can only be ascribed to diabolical influence.

Someone ought to point out to Abascal that a priest should not cultivate a moustache since it is a vain adornment usually associated with the military. That his views are heretical is beyond doubt. However, I predicted that 2017 would see the crisis of not only this dysfunctional pontificate but of the post-Vatican II Church in general, and the first three months seem to be bearing this out.