WHY DO NEW MOVEMENTS PROVIDE MORE VOCATIONS TO THE PRIESTHOOD AND RELIGIOUS LIFE THAN THE GENERAL, RUN OF THE MILL PARISHES?

This photo is recent, not pre-Vatican II, what two things are notable about it? 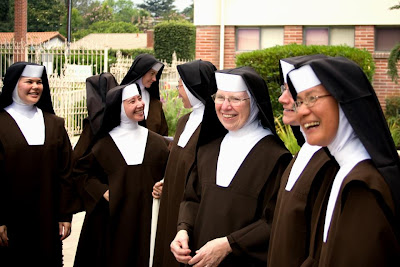 This is a recent photo too, anything unusual about it? 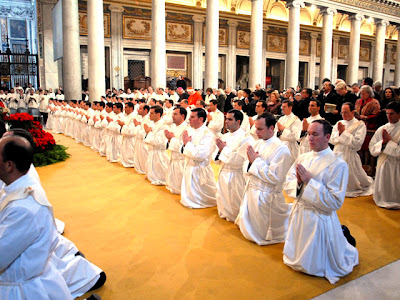 Prior to the Second Vatican Council and prior to the sexual revolution of the 1960's there was an abundance of vocations to the priesthood and religious life. But there was also an abundance of children to be sent to the seminary, convent or monastery. It was not unusual for Catholic families to have four to ten children and no one thought it odd that so many children were born into Catholic families. Catholics were known for their big families.

Of course that would change with the advent of the "pill" that helped pave the way to the sexual revolution and sex that would be impotent.

Today, it is most rare for Catholics to have four or more children. Usually it is only two or three. And those Catholic who are profoundly fecund, are often mocked by the larger culture, including fellow Catholics, for having so many children.

As well the post Vatican II, spirit of Vatican II confusion and loss of Catholic identity as well as a profound loss of priestly identity and the identity of religious both externally and internally, hastened the shortage of vocations to the priesthood and religious life and exacerbated it. It will take another generation to fully recover from this malaise of identity.

However, if you go worldwide, you will see that vocations are being produced in abundance by intentional communities whether it be the charismatic covenant communities of the USA or around the world or the other new movements of Europe, such as the Neo-Cathecumenal way and even the "suspended" SSPX.

In Augusta, Georgia, the Alleluia Community which is a covenant community where most of their members live in the community of a single neighborhood and thus like the traditional parish of "ghetto" Catholicism of the northeast and elsewhere up until relatively recently and where traditional, conservative values and morals are taught and lived and accountability is a factor, there are vocations in abundance and out of the ordinary from this community. The Alleluia Community members also tend to have four and more children rather than just two or three.

Sadly though, what the Alleluia Community has contrived in their experience since the early 1970's was common place in most parishes up until the malaise of the 1960's that still afflicts most parishes today.

The Reform of the Reform in Continuity that is going to be Pope Benedict's XVI's legacy needs to re-examine Catholic life of the 1950's, especially parish life, and learn from it again the recipe to more vocations to the priesthood and religious life.

Of course the key factor in this recovery will be the recovery of a strong Catholic identity built upon traditional values of Sacred Scripture, Tradition and Natural law and a profound respect for little "t" traditions of faith, devotion and spirituality as well as exalting the place of canon law in one's life and community which leads to accountability and encouragement in leading the difficult Catholic life of picking up one's cross and following in the footsteps of Jesus Christ.
Posted by Fr. Allan J. McDonald at Thursday, January 03, 2013

I want to be careful how I say this, because I do not want to disparage Catholic schools, but they have been part of the problem too. Many Catholic schools went from teaching a very precise catechism to teaching whatever the latest thing happened to be and calling it "religious formation". The problem was exacerbated by parents who believed that they could pay their tuition and just trust the school to do the rest. It seems that many of these young vocations come from families that didn't just trust someone they didn't know to teach their children the faith, but from parents who took it upon themselves to teach the faith and pass it on, in a very proactive way.

Some Catholic schools do a great job, but there has been a long period of rupture where many Catholic schools have been too "easygoing" in the way they instruct our young people about their faith.

And to follow on Anonymous' comments; the decline of Catholic Schools can be laid righta t the feet of the destruction of female religious organizations. The Nuns tilled the gardens from which the fresh crops of catholics were raised. The gardeners have been killed off, the fields now tended by lay people with no clue, or worse with their own non-Catholic agendas, and are we really surprised that the fields are now barren. Restoration of TRUE Catholic identity needs to address the gender specific roles ordained by God, openly and honestly, without all this poppycock about men being misogynists.

At the TLM I attended Christmas day, every family I explicitly recall was one with 4 to 8 children (perhaps a half-dozen such families)--though there might have been a smaller family or two that did not catch my eye--not from any ghetto community, but from widely dispersed locations in East Tennessee, probably having in common only the fact that a majority are home-schooled. Our small Latin Mass community has already produced several vocations in recent years, with more likely from among the 10 altar boys who served the Christ Mass.

Re: E Michael Jones - From the Catholic League: E. Michael Jones, editor of Culture Wars, reviewed Roy Schoeman’s book, "Salvation Is From the Jews." What started as a review ended up as an anti-Semitic rant playing fast and loose with Catholic theology.

There was nothing in Roy Schoeman’s book that would lead one to Jones’s conclusions. For example, Jones wrote: “The overwhelming majority of Jews didn’t just ignore Christ, they actively sought his death.” He also called Jews who do not accept Christ the “synagogue of Satan.”

Jones claimed that throughout much of Christian history, “What happened was precisely the Jewish participation in iniquity which their pertinacious and ongoing rejection of Christ made a necessity.” He added that “the logic is inescapable.” He blamed the Jews themselves for the Holocaust and pogroms: “Messianic politics has been a recipe for disaster…and the Nazi attempt to exterminate the Jews was a reaction to Jewish Messianism (in the form of Bolshevism) every bit as much as the Chmielnicki pogroms flowed from the excesses of the Jewish tax farmers in the Ukraine.”

The Catholic League condemned Jones’s anti-Semitism and repudiated his efforts to justify it in the name of Catholic theology.

Also, from a review of "The Slaughter of Cities: "Jones argues, was the result of a plot by a liberal internationalist elite—one composed mostly of mainline Protestants but including assimilationist Jews, all of whom shared a virulent anti-Catholicism. The principal weapons employed by this elite were public housing, urban renewal, freeway building, and somewhat later, busing for purposes of school integration. Jones doesn't mean "plot" in a metaphorical sense. He apparently has in mind a sitting-around-the-boardroom kind of plot, although its exact workings are never explained."

More on E Michael Jones: "Mr. Jones claims that "Judenfeindlichkeit" ("hostility-toward-Jews") is "part of the essence of Catholicism." He tries to play games with words by treating this exclusively as a religiously-directed hostility, as opposed to a racially-directed hostility (which would be open anti-Semitism), but then implies that all non-Christian Jews belong to this category of people toward which the Catholic must be hostile." CatholicMonitor.blogspot.com

More: "Br. Nathaniel: Are Catholics beginning to react against Jewish control of the Catholic Church?
E. Michael Jones: Indeed they are. Our Bishops are beginning to as well. This is because dialogue has become a synonym for Jewish subversion of Church teaching." (RealJewNews.com)

More: "Jones' anti-Semitic writings are premised on the idea that Catholic doctrine obligates the faithful to oppose Judaism, regardless of the behavior of individual Jews. The Vatican and most Catholics have thoroughly repudiated anti-Semitism, but Jones still declares himself to be a defender of normative Catholic teachings. Jones' contention that his beliefs have theological foundations may give him a degree of legitimacy among some Catholics who would otherwise be dismissive of his extremist conclusions."

More: "E Michael Jones believes: Little did we know, but Fr. (John Courtnay) Murray, Henry Luce and the CIA were complicit in a "black operation . . . whose purpose was to cripple the Catholic Church." A covert operation which has apparently achieved its propaganda victory right up to the papacy itself, "occupying the mind of [Pope Benedict XVI] and he doesn't even know it".

All I can say about the book I just mentioned is that I read it and I recommend it as pertinent to this post. I don't recall any antisemitic comments in the book, but if there were any, then the comments were certainly inappropriate.

I am exactly the parent the first anonymous described. I trusted the Catholic schools in our are to provide teachers who would integrate strong faith into high academic standards. I was wrong on both counts.

More on E Michael Jones: " In his early books such as The Slaughter of Cities, Jones railed against what he viewed to be the disintegration of immigrant Catholic neighborhoods. He blamed a Protestant-WASP elite, and to a lesser extent Jews, for seeking to dominate Catholic populations and to facilitate the decay of the spiritual and geographic foundations of their faith. In following years, Jones increasingly focused his claims on Jews as the main foreign population attempting to harm the wellbeing of Catholic communities. He published numerous articles in his magazine, renamed Culture Wars in 1996, about an alleged Jewish conspiracy to undermine not only the Catholic faith but also American society through social, political, cultural, and economic subversion. Many of these pieces would later be republished in a recent book entitled The Jewish Revolutionary Spirit, linked together to create the portrait of a people seeking worldwide social and political instability in the hopes of harming society's moral core."

Since a commentator here clearly finds the book I mentioned offensive, I have removed my earlier mention of it.