WHAT DO CATHOLIC DISSENTERS AND GODLESS SECULARISTS WHO ARE SOCIAL ENGINEERS HATE THE MOST ABOUT THE CATHOLIC CHURCH? 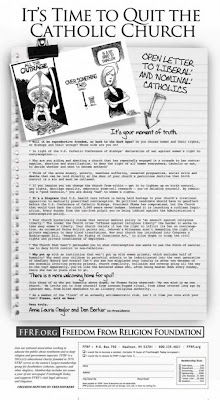 The corrupt German survey of my previous post summarizes pretty well what these Catholic dissenters want and most of it is based upon the "pelvic issues" that have so bothered them since 1968 (and thus these dissenters are my age and older, the dying generation of the Catholic Church, of which, unfortunately, I will be included in the biological solution our Lord and God has established in numbering our years.) Oh the misery and anomie of it all:

"Internal dogma and rules that had been tacitly accepted until about a year ago are now openly criticized by faithful. Criticisms range from complaints about “discrimination against women” and celibacy, to the condemnation of homosexuality, contraception and sex outside wedlock, to the marginalization of lay people involved in Church life."

Once Tradition and Natural Law are eliminated from the Catholic scene then these Catholic dissenters can focus on Sacred Scripture and only Scripture as supposedly Martin Luther did, and then reinterpret those areas that are opposed to their "pelvic issues" as purely cultural and thus to be disregarded.

By the way, Catholic dissenters absolutely fear and completely hate Pope Benedict's interpretation of the Second Vatican Council as "reform within continuity." They also hate the "reform of the reform of the Ordinary Form of the Mass" to make it more like the Mass from which it was reformed and they absolutely despise the Extraordinary Form of the Mass (the so-called non-reformed Mass) and its ecclesiology. For Catholic dissenters, ecclesiology is their false god.

The other group that hates Tradition and Natural law are the godless secularist who are social engineers. This group would be symbolize by its modern guru and HIGH PRIEST, President Barack Obama and the far left of the Democrat party.

They despise the Church's teachings on sexual morality, especially birth control and abortion, but also they completely despise the Catholic Church on her position that she cannot ordain women to the priesthood. Even more antagonistic to them is the Church teaching on unnatural sexual practices such as sodomy, fornication and adultery.

Thus these godless, political secularists and social engineers join ranks with Catholic dissenters and strive by law to force the Catholic Church to change her teachings based upon the three legs of our moral and doctrinal teachings, Scripture, Tradition and Natural Law.

Of course, like Sodom and Gomorrah, those who wish to corrupt God's law will end up in a very sorry place and the Holy Church of God will remain triumphant. So let's all take out our hymnals and sing that great Lutheran Hymn, "A Mighty Fortress Is Our God." It says it all! It should be the 21st Century's New Catholic Counter-neo-Reformation Anthem:

A mighty fortress is our God, a bulwark never failing;
Our helper He, amid the flood of mortal ills prevailing:
For still our ancient foe doth seek to work us woe;
His craft and power are great, and, armed with cruel hate,
On earth is not his equal.

Did we in our own strength confide, our striving would be losing;
Were not the right Man on our side, the Man of God’s own choosing:
Dost ask who that may be? Christ Jesus, it is He;
Lord Sabaoth, His Name, from age to age the same,
And He must win the battle.

And though this world, with devils filled, should threaten to undo us,
We will not fear, for God hath willed His truth to triumph through us:
The Prince of Darkness grim, we tremble not for him;
His rage we can endure, for lo, his doom is sure,
One little word shall fell him.

That word above all earthly powers, no thanks to them, abideth;
The Spirit and the gifts are ours through Him Who with us sideth:
Let goods and kindred go, this mortal life also;
The body they may kill: God’s truth abideth still,
His kingdom is forever.

By the way, Catholic dissenters absolutely fear and completely hate Pope Benedict's interpretation of the Second Vatican Council as "reform within continuity."

Yes, but as far as I have been able to determine, Catholic dissenters have, in the main, never read the documents, and apparently never have read the CCC, either.

Never let the facts interfere with your opinion! And if one does not read, then the facts cannot intrude.

Fornication and adultery, though sinful, are not unnatural.

So it depends on the type of sex fornicators and adulterers have that would make it unnatural. But if natural it is still a sin, not against nature and God's plan but against his prohibitions.

Oral sex is unnatural? Even as foreplay?

Oral sodomy. So one has to get the full definition of such and what one means by foreplay. Of course we're speaking of married couples, correct??????
Sodomy (/ˈsɒdəmi/) is any non-penile/vaginal copulation-like act, such as oral or anal sex, or sex between a person and an animal.[1] The word is derived from the story of Sodom and Gomorrah in chapters 18 and 19 of the Book of Genesis in the Bible.[1] So-called "sodomy laws" in many countries criminalized not only these behaviors, but other disfavored sexual activities as well, but in the Western world, many of these laws have been overturned, or are not routinely enforced.

Well, you could ask Bill Clinton...
These "unnatural acts" are based upon biological falsehoods. They go against the functions for which the various organs are intended. No creation can result from them, no life can be produced, so they are essentially sterile actions, counter to the purpose of love and marriage. It is indicative of the degree of our degradation as a culture that we are appalled that anyone might suggest that these acts should not be indulged in or that they should not even be encouraged by the myriad books and seminars in which they are touted as the way to "spice up your marriage" or "improve your realtionship." That we define our happiness, our self-hood, our relationships by the extent of our sexual satisfaction or fulfillment is another example of our decline and debasement...

As I am sure Templar will agree, the joke potential for this thread is quite high...perhaps an 8.5 or 9on a scale of 10. However, since this is not the gym, the bar, or the fire house, I will refrain from indulging these venial impulses. Fr. would not print them anyway...