DO I LOOK LIKE THE CAT THAT SWALLOWED THE CANARY? 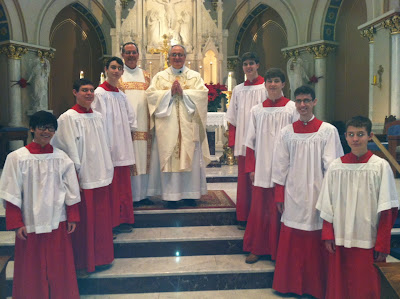 This photo was taken with the altar boys right after our Reform of the Reform of the Ordinary Form of the Mass within continuity which was celebrated today at 11:00 AM and featured the Church Music Association of America singing in the most splendid way possible, Gregorian Chant for all the Propers and other parts of the Mass.

The Mass was sung in its entirety from start to finish and even the Epistle was chanted by a CMAA member and then in place of the Responsorial Psalm, the Gradual was chanted and how splendid to meditate upon it as it was. And then the Gospel was chanted flawlessly in simple tone by me and in front of these professional chanters! That takes nerves of steel!

It was a hybrid of Latin and English, Scriptures in English, homily in English, although I was tempted to give an extemporaneous Latin one! :)

The Liturgy of the Eucharist was ad orientem, but the Introductory Rite and the Concluding Rite were at the Celebrant's Chair.

We videoed it and it will take about a week to get it digitized and placed on my blog and I'm sure on the Chant Cafe Blog.

Others took photos during the Mass and as soon as I get them I'll post them.

We had a local television station videoing some of it and if they post it on their website I'll get it to mine.

It was absolutely splendid. We had about 300 people present with many driving down from Atlanta! We had our own parish school kids as well as Mt. de Sales Academy Middle School and High School kids.

I was in muted spiritual ecstasy thanks to Gregorian Chant. If we could only do it this way each and every Sunday at our principle Mass and if this was the way we celebrated the revised Tridentine Mass for the last 50 years, I think we'd still have 70 to 80% of Catholics attending Mass.

There is absolutely no way to say the the Reformed Mass has been well received when nearly 80 to 85% of Catholics absent themselves from it every Sunday.It could have been well received if celebrated as we did today not the banal, folksy way it has been done with folk music, contemporary music and now the worship and praise genre which prepares our kids for the non-denominational Protestant sects!

For those 20 to 30% who do attend, what is it they like and do they like the right stuff or the vapidity of bar room sounds or Broadway ditties that set sacred words to secular music that is foreign to the best of our Catholic tradition and with a rock concert type of "Rocky Mountain High" being sought based not on depth of character of the music and words, but a narcotic-like stimuli?

Do they like the spiked Kool Aid of contemporary sounds that jar the spirit rather than lift it to God in a meditative, contemplative way? Just wondering?

Perhaps when advertising properly sung Mass, the following logo should be used:

FOR THE BONUS PRIZE, CAN ANYONE DETECT AN UNUSUAL VESTMENT WORN FOR AN ORDINARY FORM OF THE MASS WHICH IS SELDOM IF EVER WORN BY PRIESTS TODAY IN THE ORDINARY FORM. HINT: IT IS KIND OF LIKE THE FANON IN ITS RARITY!
Posted by Fr. Allan J. McDonald at Friday, January 11, 2013

No fair! You win!

Don't forget Father, I was formed in a parish where even in the Novus Ordo, the pastor and my mentor wore a maniple, every Mass. (I can spot 'em a mile away!) He celebrated Mass, ad orientem, every Mass. He wore a biretta, every Mass. I applaud what you are doing, I think that it is good.

Now keep wearing the maniple, every Mass. It was never abrogated, much like the biretta.

I think one can pull off a Gothic chasuble such as yours without a maniple, but Roman cut chasubles really beg for them.

sorry about the broken link above

Excellent! I have a question, why do altar boys in some parishes wear red cassocks? I've been wondering that for over twenty years!

I think it is a local decision. My Parochial Vicar talked me into these harkening back to his homeland, for which I'm sure he is homesick, of Poland. We had black ones prior to these for the past 8 years and they were getting worn out.

Without viewing the previous comments, maniple!!!!

Fr. Shelton, at the parish I attend, red cassocks are used during the Christmas season, and I think during Easter as well

Predictably, I agree with Andy and ytc about the use of the maniple (and the biretta) in the Ordinary Form.

At my home parish, St. Joseph in Waycross, Ga., I grew up with (and served in) the black cassock and white surplice. We used these until after we moved into the current church building in the early 1980's when we changed to the hooded white albs. A lot of things didn't change in our parish until our long-time pastor, Fr. Patrick McCarthy, left in the 1980's.

Sometime in the 1990's, we went back to cassocks and surplices but this time red cassocks. These were again replaced by the white albs in about 2008 by our previous pastor and are still in use. We have an adult server who wears the cassock and surplice, usually black but red on special occasions. Predictably, I also prefer the cassock and surplice for altar servers (with black being the norm).

Bless you Father for the "fashion statement". Now if we could only get a certain priest in the Macon deanery to try one on for size.

The yucky polyester albs with the giant "collars" (since when does an alb have a turndown collar?) are hideous.

"If we could only do it this way each and every Sunday at our principal Mass". What's stopping you? You have the musical resources. It was the Latin Novus Ordo which kept me from joining the 80-85 percent in the dark days of the 1970s, not the Tridentine Mass, which was a rarity then.

We are making progress, but when one is a lone ranger, crying out in the wilderness for common liturgical sense, and one knows that what one does now could be completely changed when one leaves his parish by another who doesn't get it, one doesn't want to keep yanking his parishioners around, so we move slowly as the Holy Father is in implementing the vision of the reform of the reform within continuity for the like the Church Universal, even a relatively small parish is like a ship that needs to be turned slowly in the ocean of liturgical and ecclesial life in order to prevent a capsize.

Father,
I genrally agree with what you say as to being prudent in pacing liturgical changes in a parish. Still, as you well know, a pastor also has to be the point man in easing these changes back in. We can't just sit back and wait for it to be imposed. The things you are doing are already legitimate options but most people in parishes just don't realize this. People have to be prepared and educated in advance. You have done this by regularly offering optional EF Masses and by the use of Latin and ad orientem in the OF Masses. Blogs like this one are also helpful for those who will take the time to look them up and read them.

The single biggest thing that helps this whole process, in my opinion, is the offering of the EF Mass in a parish, as an option. No one is forced to attend as an only choice but it still has its inevitable effect on people's hearts, minds, and attitudes about liturgy. Priests need to get past the false notion that they must be speakers of Latin before they can even consider learning to offer this Mass. As to the Latin, all that is required is the ability to competently read and pronounce the words and a general understanding of what is being prayed (eg. this is the Roman Canon and now I am going to say the words of Consecration--"Hic est enim corpus meam," or this is the Lord's Prayer, the Pater Noster). The priest can prepare to offer each Mass by reading the daily prayers in the vernacular privately (so he will know what they mean) before he goes out to offer the EF Mass. Beyond that, it is only a question of learning the rubrics. While a more conversent knowledge of Latin might be the ideal it is not required and I seriously doubt that most priests who offer the EF are highly educated in Latin.

There needs to be an EF workshop (the basics of how to offer the EF) in this Diocese. This needs to happen so that priests can become more educated (and to change the attitudes of some) so they can then prepare people in their parishes for common sense reforms of the Ordinary Form (such as the small changes or options you are already implementing).

You are right that the ground must be prepared before the seeds are sown. To use another agricultural analogy (which probably makes more sense to people who are familiar with farming practices) the EF is the liturgical turning plow which can break the hardened sod and roll over the fresh broken dirt so that new things can be sown and then may grow.

ytc,
I'm sorry, I knew this and I guess I just hadn't had enough coffee yet! I have often told my 6th grade Sunday school kids of how protestants made fun of the Catholic belief in transubstantiation by referring to it as a bunch of "hocus pocus," which comes from the words "HOC est enim corpus meam."

"Softly softly catchee monkey". But the restoration does not need an enormous timescale. There are those who love the four-hymn sandwich and by all means cater for them. Unfortunately these people would object to good liturgy in their parish even though they would not attend the Mass in which it was offered. It's a dog-in-the-manger attitude which is sadly prevalent. These people need to be given the bum's rush.