YIKES, PREPARE FOR ARMAGEDDON: SSPX MIGHT BE RECONCILED TO THE HOLY SEE! IS POPE BENEDICT TURNING BACK THE CLOCK ON PROGRESSIVE DISSENT AND DISREGARD FOR THE FAITH AND MORALS OF THE CHURCH

For those who want a secularized Catholicism that takes its cues from secularism and the enablement of that which is not Catholic within the Church, if the following comes to pass there won't be much Kumbaya from the progressive secularists in the Church.

Surely this image of the Holy Father sends progressive secularists in the Church skin crawling: 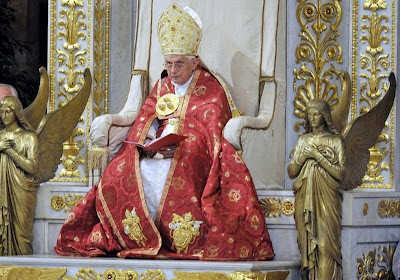 Urgent/For the record:
Le Figaro - "Rome and Écône on the verge of reaching an agreement"
From major French daily Le Figaro, in an article signed by its main religion correspondent, Jean-Marie Guénois:

The signing of a document establishing the relations between the Holy See and the disciples of Abp. Lefebvre is a matter of days.

Officially, the Vatican awaits the response of Bp. Bernard Fellay, the chief of the Lefebvrists. As soon as it is received in Rome - "it is a matter of days, and no longer of weeks", - it will be immediately examined. If it conforms to expectations, the Holy See will very quickly announce a historic agreement with this group of faithful, known under the name of "integrists".

But unofficially, and with the greatest discretion, emissaries have worked, from both sides, to "reach an agreement". In the past few weeks, the final adjustments have been concluded between Rome and Écône in order to better respond to the demands of "clarifications" asked for by the Vatican last March 16.

It is thus that the final response of Bp. Fellay, very well pondered and well prepared, should settle - this time, for good - a very delicate negotiation which was relaunched by Benedict XVI following his election, in 2005.

The "Ecclesia Dei" commission, sheltered within the Congregation for the Doctrine of the Faith, the most important ministry in the Vatican, is in charge of this dossier. But it is also, at this point, personally followed by Benedict XVI. And he wants an agreement.

Which allows for the consideration, by well informed persons, that a positive outcome will truly come into being. Even at the cost of the permanence of profound disagreements regarding the Second Vatican Council.

Disagreements completely accepted, besides, by the Pope. He has placed his pontificate under this line of reinterpretation of the Vatican II Council. Following two axes: emptying the spirit of "rupture" of '68 and avoiding opposition between the highest tradition of the Church and modernity.

On Monday, Benedict XVI will reach 85. He is tired. His entourage do not hide this. He has had to rest this week in Castel Gandolfo from his exhausting voyage to Mexico and Cuba, then from the long services of Holy Week. He should be back in the Vatican on Friday evening. As a priority on his bureau: this decision on the Lefebvrist affair. It will be one of the weightiest of the pontificate.

For fifty years, the Lefebrvists have stood in opposition to the Holy See regarding Vatican II. And in formal juridical rupture since June 1988, when Abp. Marcel Lefebvre ordained four bishops despite the Pope's interdict.

Joseph Ratzinger was placed at the time by John Paul II in charge of the negotiations with the rebellious bishop. He has never accepted that failure. Nor, once having become the Pope, the prospect of an enduring schism in the Church.

Benedict XVI compels the Church to reconcile with herself

One after the other, Benedict XVI has demolished, with all his papal authority, the obstacles that prevented a full reconciliation with the disciples of Abp. Marcel Lefebvre.

And, if a final agreement is announced in the upcoming days, the essential part of the work was already put in place by this pope:

- The reestablishment in 2007 - as an "extraordinary" rite of the Catholic Church - of the Mass celebrated in Latin, that is, according to the Missal of John XXIII in force before the Council.

-The removal, in 2009, of the excommunications which fell on the four bishops ordained by Abp. Lefebvre.

-The launch of the doctrinal discussions between the Holy See and the Fraternity of Saint Pius X, in that same year, regarding the Second Vatican Council

The doctrinal disagreement between the Lefebvrists and Rome regarding the Second Vatican Council was effectively abyssal. But it had been forgotten that the object of those conversations was not finding an agreement, but establishing the list of divergences and of their reasons.

It is therefore knowingly and, thus, without any ambiguity, that Rome intends to seal this unity found once again with Écône, stronghold of the Lefebvrists in Switzerland.

IIt will probably be done with the creation of a special statute - a "personal prelature" - already experienced by Opus Dei. This structure grants a true autonomy of action at the same time as the Catholic faith is shared. Its superior answers directly to the pope, and not to the bishops.

But the true "revolution" that Benedict XVI intends to leave before the eyes of the history of the Catholic Church is elsewhere. It is not related to peripheral aspects of the Catholic Church. These have already enraged the groups opposed to this reconciliation. The so-called "Progressives" of the Conciliar Church who see the "gains" of Vatican II questioned. The "ultras" within the Lefebvrist ranks who see in this a betrayal and a compromise with Modernist Rome.

Oh my, let us pray that this comes to fruition. Fr, will you see if you can say a Mass for this intention tomorrow?

Isn't it amazing how many people are shocked when Catholics act like Catholics?

It's not going to happen. The SSPX still believe that the Jews are guilty of deicide. It would be undue any progress in relataions with the Jews and Vatican II's Nostrae Aetate.