DARK SHADOWS AND THE GOTHIC EXPERIENCE AND BLOOPERS TO BOOT!

Jonathan Frid played Barnabas Collins on ABC's Dark Shadows which aired Monday through Friday at 4:00 PM between 1966 to 1973. It was a soap opera like General Hospital and Days of Our Lives, but scary. It was very popular with my age group at the time, elementary and middle school. In fact everyone after school watched it religiously! Around 1968 ABC decided to move it to 3:00 PM which meant its audience would miss it since they would be en route home from school. There was almost a national riot, so ABC put it back to 4:00 PM.

It was filmed live, meaning that any all mistakes would be shown to the public no matter what, since there were no re-takes. That made the show even more fun to watch.

Jonathan Frid in his heyday as Barnabas Collins was in a parade in Augusta, Georgia around 1969 (which I went to) and he drew some of the largest parade crowds known to Augusta at that time.

He died yesterday (RIP). I wonder if he is Catholic and the priest will use the black vestments? Of course if he is really a vampire, maybe he'll return and if this is a publicity stunt to prepare for the new movie "Dark Shadow" starring Johnny Depp as Barnabas and in which Frid has a cameo and it comes out in a couple of weeks, well what a hoot! And below these pictures are the live bloopers of Dark Shadows as I saw them when the show first ran! Lots of fun! 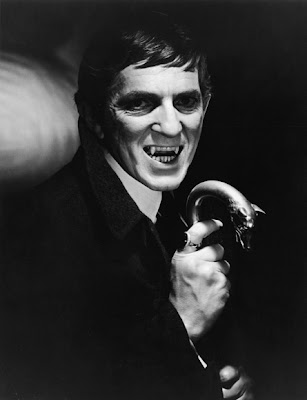 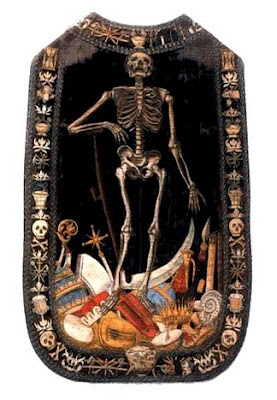 And the woman who played Vickie Winters was the actual paramour of Klaus Von Bulow who tried to kill his wife in real life, but put her into a lifelong coma instead. "Vicky" testified at his trial!

First Gene and now you, Father? My Gothic campaign over at Cemetery Picnic is really catching on!

I was a bit too young for Dark Shadows (not too young to remember, but too young to be able to handle it). My sister and her friends watched it religiously. Because of my experience watching it I was terrified of coffins for years.

There once was a man who loved Gothic,
He introduced it into every topic.
His friends said, "the Dickens,"
This morbid stuff sickens,
The poor man is simply myopic.

Sorry, Gene, I'm not myopic but astigmatic (but not a stigmatic, although stigmatics are very Gothic). :-) And anyway, I wasn't the one whose been posting pictures of Barnabas and skeletal vestments here; I'm just responding to them. Perhaps your limerick is intended to describe Fr. McD? :-)

The Gothic era cast a wonderful spell,
O’er Architecture and Heaven and Hell.
But what we don’t miss
when we contemplate this,
is way that most everyone smelled.

There once was a man astigmatic,
Who read Gothic books in the attic.
He said, "I can't see,
And it's dark as can be,
But, the atmosphere's melodramatic."

Thank you, thank you, please hold your applause...

You guys, like Barnabas, are starting to scare me now!

A Priest began reading Ann Rice,
And found every page teeming with vice.
He went to Confession
For a three hour session,
And a penance of sleeping on ice!